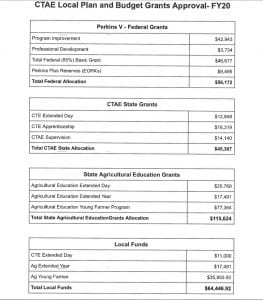 ELLIJAY, Ga. – The Gilmer County Board of Education is moving forward with the first month of the new school year as they prepare last minute personnel, plans, and financial reports in the August Meeting.

The board approved personnel but could still see another hire next month as Gilmer Schools Superintendent Dr. Shanna Downs said they are looking at another Kindergarten teacher. As such, she did say she will be polling the board for this approval later. The poll will be later confirmed in the next meeting.

Approving the CTAE (Career, Technical, and Agriculture Education) Plan, the board presented a list of Federal and State Grants, along with local funds, to put into the program. The plan, according to Downs, is based on numbers provided by the state through the school system’s consolidated application. Board approval will now return the plan for finalization for these grants.

The plan is similar to last years according to Downs, combined with local matches, the application is an annual process that the board undergoes on routine.

Alongside the Financial Report, ESPLOST Expenditures, and Nutrition Finances, the board approved Purchasing Policy Expenditures including numerous purchase from the L4GA Grant.

Additionally, a purchase came to re-order a maintenance truck from Ronnie Thompson Ford. According to the report, the purchase was originally submitted in FY 19, but the truck was not available by year end, prompting a re-submission now.

Another financial came with an adjustment to the Transportation Salary Schedule. According to Downs, they have been looking for a diesel mechanic for the buses for a long time. Downs said, “We are finally able to find someone, and in order to pay for his credentials we need to make a slight change to that salary schedule to add a supplement.”

Downs informed the board that approval would make the county fully staffed in mechanics. The school system would now be able to do all necessary work in house, excepting warranty work.