ELLIJAY, Ga. – Several offices in both Fannin and Gilmer County are closing today as reports indicate one or more employees may have had exposures to the Coronavirus in recent days.

The District Attorney’s Office in both Fannin and Gilmer have closed today. Additionally, Gilmer’s Probate Office has confirmed closing and the Gilmer Board of Commissioners has cancelled its Wednesday morning Work Session citing a “recent spike in Covid-19 cases.” 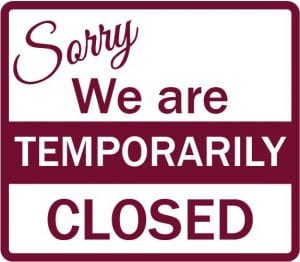 The Gilmer County Probate Court released a statement with this photo saying they would be closed immediately and “until further notice.”

FYN has also confirmed that every office of an elected official in Gilmer County has been closed until Monday along with the court systems with the exception of the Sheriff’s Office.

According to Fannin County Commission Chairman Stan Helton, only the second floor of the courthouse is closed and it will reopen on Monday after it has been sanitized.

Despite the offices closing and courts canceling, the Gilmer Courthouse and Fannin Courthouse are both, as a whole, not closed at this time. Citizens may still enter the courthouses.

Reports are coming in that in Gilmer, Sheriff’s Deputies at the security checkpoint in the entrance are informing citizens of the offices and courts closing and are directing visitors accordingly.

Additionally, FYN confirmed that the Gilmer Planning and Zoning Office was closed late last week due to possible exposures of an employee.

Sources tell FYN that at least one of the exposures this week may have been related to a recent church revival held in Gilmer County. However, no cases have been officially confirmed at this time.