ELLIJAY, Ga. – Whether its a time when you stock up and stay home or a time when you meet the coming crowds to tour the grounds, two weekends in October undoubtedly change the face of Gilmer County every year with the Georgia Apple Festival.

Except, that wasn’t true last year. Amid the pandemic, the Gilmer Chamber has had to cancel several festivals and events over the last two years including the Apple Blossom Festival, Taste of Ellijay, and the most popular event, the Georgia Apple Festival. Even as recent as Spring of this year, pressure from the outbreak has been felt as the Chamber cancelled the 2021 Apple Blossom Festival.

Despite its popularity and efforts to hold the event in some form adhering to restrictions, the Georgia Apple Festival was cancelled in 2020 as the Board of Directors stated, “The difficult decision was made following the guidance of the local healthcare community, after consultation with local officials, and with extensive feedback from vendors, volunteers, and local citizens.” 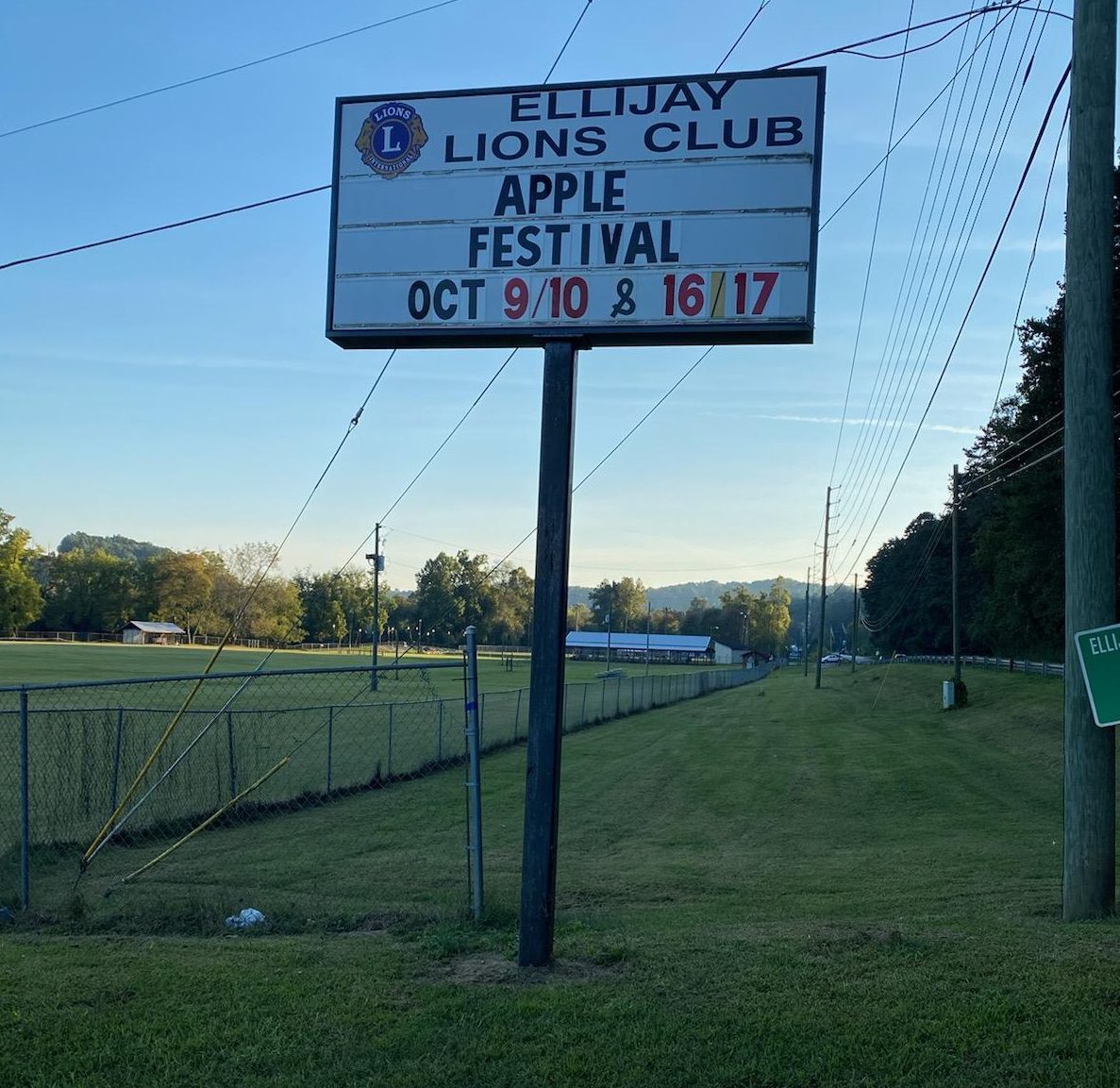 Preparing for next week’s event, The Lion’s Club sign at their fairgrounds is heralding the return of the 50th Georgia Apple Festival.

Chamber President and CEO Jennifer Grimmer told FYN earlier this year that the Chamber and those involved were working with former Chamber President Paige Hutto on the major event as she continues along her first year with the Chamber. In a statement in February, Grimmer said, “I am happy to confirm that we are on track for the Apple Festival” However, rising COVID numbers in positive cases over the summer months had some doubting whether the event could happen if it continued.

However, recent weeks have seen the preparations spike. And this week even saw the sign at the fairgrounds posted with the official details for the event.

Additionally, a theme has fallen on the Festival. This year is not just a return to the annual event, but a “Golden Year” theme marks the return with the 50th Georgia Apple Festival.

FYN’s current understanding is that some details of the festival could be very different this year including more space among the vendors. Those vendors have been among main concerns of the Chamber with cancellations as they have reached out for feedback and suggestions for future events and planning. Vendors that rely on festivals like this have been specifically hurt in the last two years as the Apple Festival is not the only cancellation they have suffered.

The Chamber even noted last year that they were working with some to potentially rollover certain fees to this year in efforts to help and support the vendors that make up such a large part of the festival.

The event’s return is right around the corner this year as it moves back into its usual dates on the second and third weekends of October. As this Friday is first of October, that means the event starts next weekend. The official dates are October 9, 10, 16, and 17. The festival begins at 9 a.m. every day and ends at 6 p.m. on Saturdays and 5 p.m. on Sundays.

With the return of the festival also comes the return of events all over Gilmer County including Apple Arts on the downtown square and the Apple Festival Parade, as well as other supporting events like the 5k Road Race and the annual car show. The Apple Festival Parade will be held on October 8 this year, at 6 p.m. However, the Chamber said it still needs more participants for the event.

The parade hosts the theme “The Golden Year” in honor of the 50th anniversary of the Georgia Apple Festival and prizes will be awarded to the best, most original participants according to the Chamber.

The supporting events can all be found on the Georgia Apple Festival Website including the Annual Apple Classic Auto Show on October 9 and the Apple Festival 5k Road Race at the Ellijay Elementary School on October 9 at 8 a.m. Unfortunately, the 2021 Ellijay Apple Queen Pageant will not rejoin the events this year.

Additionally, the Gilmer Chamber is still in need of volunteers to help with the operations and are asking people to contact them to volunteer.