Home / President of the United States

Reposted with permission from the Dustin Inman Society blog

While the liberal media ignores the fact, both candidates in the bruising two-month Georgia Republican gubernatorial primary race have avoided immigration issues where the eventual governor can make the biggest difference.

With run-off day looming tomorrow, Lt. Governor Casey Cagle and Secretary of State Brian Kemp have mostly kept their immigration focus away from topics that may offend the Georgia Chamber of Commerce and narrowed to “sanctuary cities” and on illegal aliens who have already committed additional crimes in the United States – or “criminal illegal aliens.”

The main driver of illegal immigration is illegal employment, which was not mentioned in either campaign.
In addition to black market labor, they are also both dodging obvious and voter-popular immigration issues where a governor can play a central role, including drivers licenses to illegal aliens and official English for government.

Silence on allowing voters to decide on constitutional official English
Nearly 86% of Republicans – and 76% of all voters polled – answered “yes” when asked “would you support an amendment to the Georgia constitution that makes English the official language of government?” in the same poll conducted by Atlanta-based Rosetta Stone Communications

Despite the objections of the business lobby and with a unanimous party-line vote, in 2016, the Republican-controlled Georgia state senate passed a Resolution that would have allowed all Georgia voters to answer a ballot question that year on English as the state’s constitutional official government language.

But the legislation quietly died with Democrat “no” votes when Republican House leadership instructed Republicans to stay away from a sub-committee hearing which killed the bill.

Official English is not a voluntary campaign topic for either of the Republican candidates for Georgia governor. This despite one metro-Atlanta school district boast that 140 foreign languages are spoken by its students.

While it is not widely understood by voters, currently, the state of ten million offers the written road rules portion of the drivers license exam in eleven foreign languages.

Drivers licenses for illegal aliens – not a campaign issue
The same statewide poll that asked about official constitutional official English showed that 80% of Republicans and 63% of all Georgians also want to end the practice of giving any drivers license to any illegal aliens.

Many voters are unaware of the fact that Republican Georgia has issued more than 20,000 drivers licenses and official state photo ID Cards to individuals who the United States Immigration and Citizenship Services classifies as lacking lawful immigration status – but who have been given work permits by both the Obama and Trump administrations.

Work permits, officially known as Employment Authorization Documents (EAD) are issued by the United States Citizenship and Immigration Services which is an agency in the U.S. Department of Homeland Security.

The 2005 REAL ID Act implemented after the horror of 9/11 says that illegal aliens who have been granted deferred action on deportation or who have been ordered deported but then apply for permanent residence use that temporary condition as “evidence of lawful status” for the purpose of obtaining a federally approved drivers license or state ID card.

⦁ In a direct contradiction, USCIS says  “Current law does not grant any legal status for the class of individuals who are current recipients of DACA. Recipients of DACA are currently unlawfully present in the U.S. with their removal deferred.”

⦁ Through an official spokesperson, USCIS has provided a breakdown of the classification codes contained on the work permits that illustrate the immigration status of the bearer.

⦁ USCIS also operates the SAVE verification system for official agencies to determine immigration status of applicants for public benefits. Drivers licenses and ID cards are public benefits in Georgia.

Georgia is among the states that issues the identical drivers license to legal immigrants with ‘green cards’ and foreigners who entered the US lawfully on temporary visas – including Mercedes Benz executives – as are issued to the aliens the state Attorney General and USCIS says lack legal status. The defacto national ID, these credentials are used as valid ID to enter military bases, federal buildings and board airliners in America’s airports. 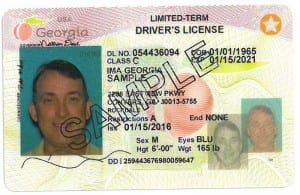 Sponsored by conservative state Senator Josh McKoon, in 2016, legislation passed the Georgia Senate by a two-thirds majority – with every Republican vote except one – that would have clearly marked driving and ID credentials to note the illegal immigration status of the bearer. That measure was allowed to expire without a hearing in the GOP House, controlled by business-oriented Speaker David Ralston. McKoon also sponsored the official English Resolution.

Most Georgians do not realize that under state law the same aliens USCIS says have no lawful status but have been issued a work permit are eligible for state unemployment benefits.

The jobs-for Americans, drivers license/illegal alien/unemployment benefits issue is not a topic in either Republican candidate’s campaign for the Republican nomination for Georgia governor.

Georgians deserve to now where the candidates stand.

The powerful Georgia business lobby has long worked against protecting jobs and wages for legal workers, use of E-Verify, immigration enforcement and official English. Georgia ranks ahead of Arizona in its population of illegal aliens, according to estimates from DHS and the Pew Research Center. One estimate is that the crime of illegal immigration costs Georgia taxpayers $2.4 billion annually.

The current governor, two-term, business-first Republican Nathan Deal, has avoided the illegal immigration issue since his first year in office. But, Deal boasts that Georgia is named number one state in which to do business by Site Selection magazine.

The influx of migrants and the anti-enforcement power of the business lobby will eventually result in a Democrat in the Georgia governor’s office. This year’s far-left, anti-enforcement candidate for the office, Stacey Abrams, has a real chance of winning and has recently received a one million-dollar donation from Georgia Soros.

Blue Ridge, Ga. – What has come down to a battle of endorsements over the last two weeks has played out with some big name backers. Secretary of State Brian Kemp landed perhaps the largest endorsement of all as President Donald Trump tweeted out his support of the Georgia gubernatorial hopeful.

Kemp’s campaign announced recently the backing of several Republican opponents from the May Primary. Among those to officially announce their support were Michael Williams, Clay Tippins, and Hunter Hill.

Opponent in the gubernatorial runoff, Lt. Governor Casey Cagle, was unable to receive any backing from Republican challengers that were faced earlier this year.

Cagle did however land some big name endorsements recently as he continues his campaign. While holding the title of the only Georgia candidate in the governor’s race to be backed by the National Rifle Association (NRA), Cagle drove this message home as the President Elect of the NRA, retired Lt. Colonel Oliver North, hit the trail with Cagle to show his personal support of the candidate.

Although it seemed that the cards had become stacked in Cagle’s favor, Kemp showed his final hand and delivered a fourth ace by officially getting an endorsement from the President of the United States Donald Trump.

With less than a week left in the runoff, it seems that Cagle will be unable to top Kemp’s latest move.

Follow FetchYourNews for the latest election information and Cagle’s thoughts on Kemp’s latest round of endorsements.

Trump wins!  Donald J. Trump wins the Election and is our President Elect of the United States of America!  Make America Great Again!