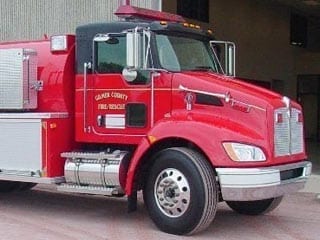 Gilmer County serves as no exception to the current economic climate surrounding our nation and most nations around the world. Gilmer’s proposed 2011 budget created by the team of incumbent and incoming commissioners Will Beattie, Danny Hall, JC Sanford, and Mark Chastain has seen significant cuts, or trimming of the “fat.”

“There will be two single-man stations that will be un-manned. We have many un-manned stations through-out the County that were never manned until the last couple of years. There were additional stations built and then there were stations that were not previously manned, that were staffed at that time,” Beattie commented via email. The addition of fire stations seemed to be preemptive of the projected growth of Gilmer County during the housing boom in the middle of the decade. Now that the boom has turned to bust as this decade comes to an end, there is much “fat” to be cut off of Gilmer County’s expenditures.

“Now we are down to the bottom and the remaining cuts will be cuts to service and personnel,” he added.

“The road department got hit the hardest,” Hall said over the phone.

The road department’s expenditures have been significantly lowered, a proposed $1 million.

“[We] closed all but three dump sites,” Hall added.

The goal of the budget cut was an overall 12 percent, in order to counterweight the $2.1 million dollar shortfall the county was facing.

“In lieu of raising taxes that many citizens would simply not be able to afford, there have been drastic cuts made,” said Beattie

“Since I have been in office the budget has had to be cut nearly 6 million dollars,” he added.

The Sherriff’s office remains the largest county expenditure at approximately $3 million, ahead of Fire and Rescue at $2.4 million, and the detention center at $1.9 million. The proposed 2011 budget is just that, proposed. It will be voted on for approval Thursday, December 23, 2010, at 6:00 PM in the Jury Assembly Room of the Courthouse during the regularly called Board of Commissioners meeting.

But, as it stands today, and after several tough decisions had to be made, the 2011 projected revenue equals 2011’s proposed expenditures.

“We are making the best decisions that we know during these hard economic times to ensure we make our government as efficient as possible without further burdens on the tax payers,” said Beattie.