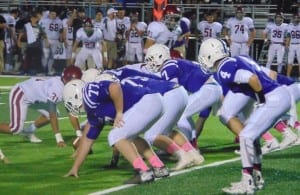 The Gilmer Bobcats are finished talking about “heart” and “courage” and all of the words you use when you’re describing a football program that is completely rebuilding from the ground up. They don’t want your sympathy in Gilmer County. They want your respect, and with the work they’ve put in this season, they’re going to get it.

Friday night, after recognizing the seniors at center field, the Cats lined the sidelines to host the top team in AAAA football right now – or so the experts say – the Ridgeland Panthers. A familiar face opposite the home stands, Ridgeland head coach “Tank” Tankersley stood ready to pick up another win and move closer to an eventual showdown with some of the best high school players to ever play the game (that is, if sports fans are fortunate enough to see Ridgeland play Cartersville later this year).

On the home sidelines, Gilmer head coach Casey Wingard and his varsity football team stood ready to take home a win of their own, albeit they were searching for a different kind of victory: the end zone.  The Bobcats have struggled to score a touchdown all season long – having only scored in one game (14pts vs Union) – how were they going to do it against one of the best defenses in the state of Georgia?

Both coaches ended the day with accomplished goals.

Ridgeland defeated Gilmer 64-14, and there’s not a lot to be said other than this:

The Gilmer County offense finally had a chance to know what a touchdown feels like for the second time this season, and this week they travel to Lafayette to feel it once again. It is the only game that matters now.

This season is history. It’s over. Wingard and his staff can put away the schedules. They can let go of the sting of a dropped pass, the burn of a fumble, and the agony of injury. This week, Gilmer County has the best match-up they’ve had this year.

Kickoff is scheduled for 7:30pm. It’s time to use your Ingles Fuel Points – fill up the van and load up – come out and support the new and ever-improving Gilmer Bobcats!