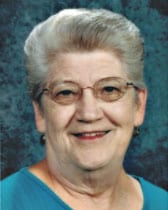 Mrs. Ledford was born June 8th, 1938 in Ellijay, GA to her late parents Ed Bradley and Edith Hannah Watts Bradley.  She and her husband owned and operated the Dairy Queen in Conyers, GA, and Shirley also worked for many years in the cafeteria at Ellijay Primary School.  Mrs. Ledford loved spending time with her family, crocheting, and working on word puzzles.  She is preceded in death by her father, Earl Prince, and siblings, Martha Wilson and Eddie Bradley.

Family will receive friends from 4pm until 8pm on Thursday, November 16th, 2017 at the Logan Funeral Home.

Flowers are acceptable, or donations may be made to the Boardtown Church of Christ Cemetery Fund, c/o Shannon Bearden, 189 Chancey Road, Cherrylog, GA 30522 in memory of Mrs. Ledford.