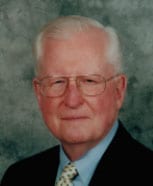 Mr. Hill was born August 27th, 1933 in Ellijay, GA to his late parents James Samuel and Mary Marie Parks Hill.  He graduated from Ellijay High School, Class of 1950, served in the United States Navy as a petty officer, third class and received three Korean Engagement Stars.  Parks went on to attend the University of Georgia, graduating with his bachelor’s degree in 1961 and earning his masters degree in 1972.  Mr. Hill worked for the Georgia Department of Human Resources from 1962 until his retirement in 1989, and went on to work for the Atlanta chapter of the American Red Cross from 1989 until 1996.  He attended Nine Mile United Methodist Church.

Family will receive friends from 4pm until 8pm on Tuesday, December 12th, 2017 at the Logan Funeral Home.

In lieu of flowers, the family requests that donations be made to the Gilmer County Food Pantry, 5273 Highway 52 East, Ellijay, GA 30536 or to the Nine Mile United Methodist Church Building Fund, P.O. Box 296, Ellijay, GA 30540 in memory of Mr. Hill.

The family requests that no food be brought to the funeral home.