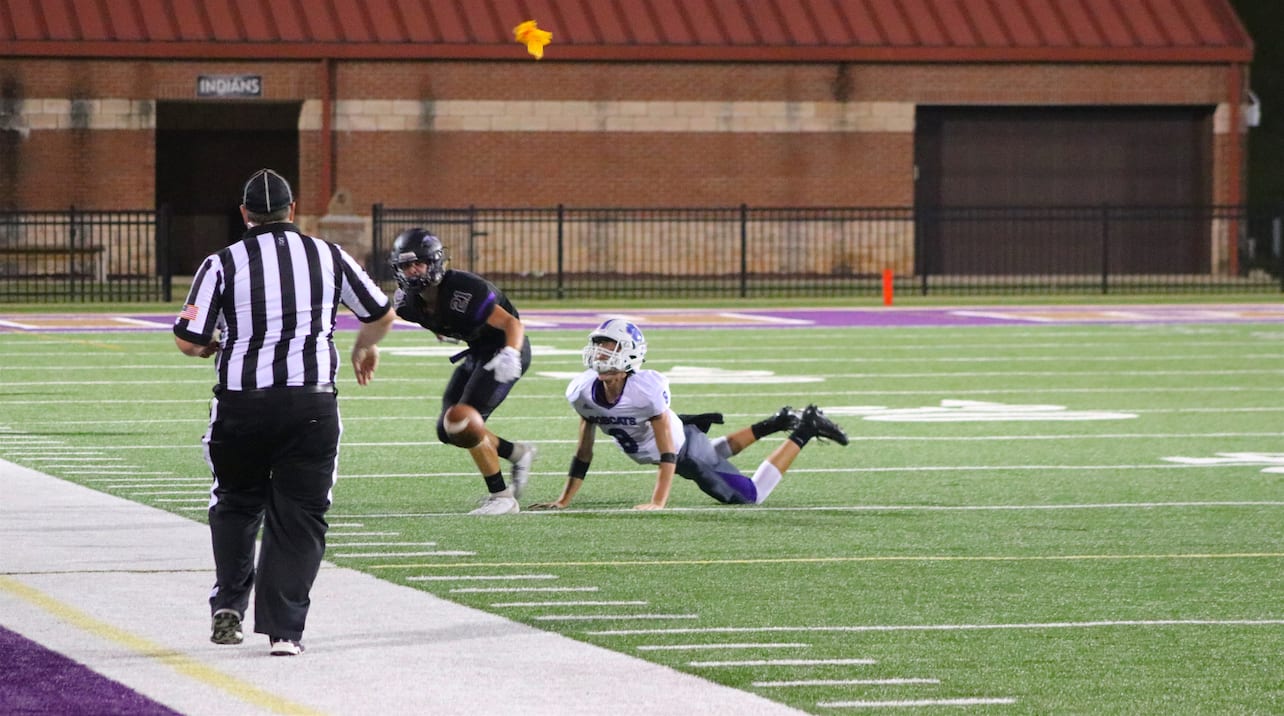 Dahlonega, GA — The Gilmer Bobcats went on the road to Lumpkin County Friday night to face off against the Indians. The game was back and forth, ultimately won by Lumpkin 29-21. Despite the loss, Gilmer was impressive in this final game before the start of their region schedule in two weeks. For the most part they did what they wanted to do offensively — put together several long, sustained drives that resulted in touchdowns. Unfortunately, they could not overcome early miscues and some key injuries, despite making several big plays to stay in the game.

“We had some kids hurt, we played with three linebackers that never played the position before and that just killed us on defense,” said Head Coach Saunders following the game.

Saunders was referring to the early losses of his two Junior starting linebackers Kyle Allison and Ashton White. The loss of these two defensive stalwarts helped set the stage for Lumpkin Running Back Bojack Dowdy to have the game of his life. Dowdy carried it 22 times for 153 yards and three touchdowns.

Gilmer’s first drive stalled after they received the opening kickoff. Lumpkin’s spread attack quickly moved the ball inside the red zone. The drive was capped by a ten yard Drew Allison run to give Lumpkin the early 7-0 lead.

After trading possessions the Bobcats embarked on an eight minute drive that ended with a two yard Spenser Smith touchdown. Adolfo Bautista’s extra point tied the game at 7.

Lumpkin would respond immediately with a 56 yard run by Dowdy. Gilmer blocked the extra point to keep it at 13-7. A Gilmer turnover on downs on the ensuing possession allowed Lumpkin to get the ball back and drive inside the Bobcats 10. Indians Sophomore kicker Will Ramirez kicked a short field goal to extend the lead to 16-7 at the break.

Coming out of halftime the Bobcats executed a successful onside kick to steal possession away. However, after picking up a first down they fumbled it to Lumpkin. As so often has been the case, Gilmer’s defense stood tall, forced a punt, and went to work on offense. This time it was a five minute drive that culminated in a play action run by Smith that faked out the entire stadium. Smith’s 30 yard touchdown run and Bautista’s PAT made it 16-14.

In what became a common theme throughout the night, Lumpkin was able to answer quickly. Two big plays got the Indians inside the Gilmer 5 and was capped off with another Bojack Dowdy touchdown run. Lumpkin converted the extra point to extend their lead to 23-14, and it stayed that way through the end of the third period.

The ensuing drive was a “must-score” scenario for the Cats. Faced with 4th and long from around midfield the Gilmer offense elected to run the ball, witch caught the Indians off-guard. Sophomore RB Gray McClure busted a 50 yard run all the way inside the the Lumpkin 5 yard line. Smith then scored his third touchdown of the night on a short carry. Bautista connected on his third straight PAT to bring the Cats within two points, 23-21, with 10:00 left to play.

Lumpkin took a page out of the Cats playbook and embarked on a long drive to seal away the game. Their 4-minute offense consisted of a steady dose of Bojack Dowdy running left, right, and up the middle. It ended with Dowdy’s third score of the game. However, Gilmer blocked another PAT to keep the game within one possession, 29-21.

That’s where the Bobcats luck ran out. Their attempt to drive down the field and tie the game fizzled out at midfield with consecutive incomplete passes.

Although there is no such thing as a moral victory, this was still a positive performance for the Gilmer Bobcats. Their ability to overcome the adversity of early injuries combined with their ability to keep coming back said a lot about them and the coaching staff. It’s reasonable to believe that in the past, they would’ve quit on the game when they went down by double digits. That didn’t happen. In fact, they made big plays when they needed to. The blocked PAT in the closing minutes gave them a chance to have the ball and attempt to put together a game tying drive. Staying in the game, having a chance to win throughout all 48 minutes is a hallmark of a good football team. They aren’t quite there yet, but going into region play there is lots to look forward to.

Gilmer is 2-2 on the season. They have a bye next week before hosting the Pickens Dragons to open up region play on September 27. Pickens is currently 1-2 after losing 27-20 last night to White County.