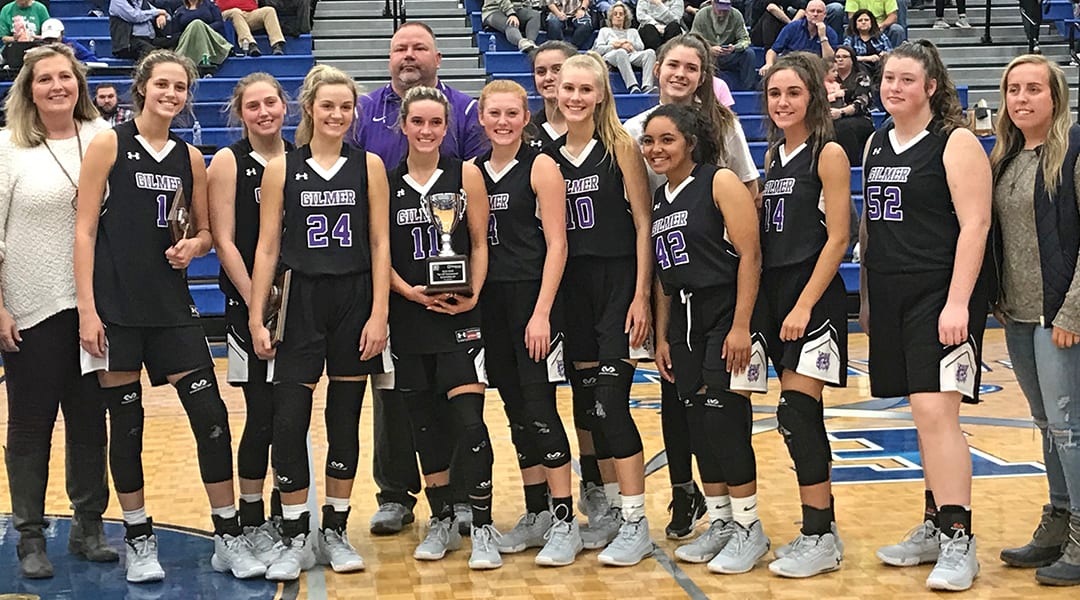 The third season of the Susan Nunn era at Gilmer High is off to a strong start after the Lady Bobcats placed second in the annual north Georgia Thanksgiving Tournament in Blue Ridge.

Sophomore forward Elly Callihan scored a team-high 15 points, but she was the only Gilmer player in double figures in the low-scoring affair. 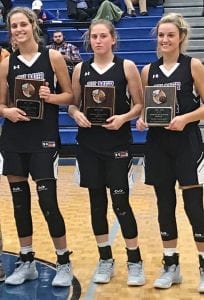 From left, sophomore Elly Callihan, senior Bailey Teague, and junior Emma Callihan were named to the all-tournament team for the Lady Bobcats.

Despite that loss, the Lady Bobcats have much to be excited about. The team’s three all-tournament team members come from three different classes. Teague, Emma Callihan, and Elly Callihan were the three players named from Gilmer.

On the opening day of the tournament, Saturday, Nov. 23, Gilmer ran away from area-rival Pickens (2-2) in a 71-53 victory. While Gilmer and Pickens are both in Region 6-4A, the game did not count toward either team’s region record.

Elly Callihan scored a game-high 24 points for Gilmer, while Colwell put up 17 and Teague scored 15 in the dominant victory against the Dragonettes.

Elly Callihan scored nine in that third period, while Colwell scored five to propel the Lady Bobcats into the big lead.

The win will undoubtedly give the Lady Bobcats confidence when the two teams meet again on Dec. 17 in Ellijay for a region game.

In between the win against Pickens and the loss to Fannin Co., Gilmer defeated Hiwassee Dam (N.C.) 41-35 in a surprisingly hard-fought game Monday, Nov. 25.

Junior guard Emma Callihan led the team with 12 points in the game, including eight points in the fourth quarter when her team needed her the most.

The Lady Bobcats led 30-25 to start the period, but the Lady Eagles closed the gap several times during the final frame before finally being put away late.

Elly Callihan had 11 points, all in the first half, while Ledford scored eight.

Up next for Gilmer is the opening game in the Region 6-4A schedule against Southeast Whitfield Co. That game is scheduled to tip-off at 6 p.m., Tuesday, Dec. 3, in Ellijay.

Gilmer defeated Southeast Whitfield soundly in all three meetings last season, including a 60-36 victory in the region tournament.

To read about this week’s TeamFYNSports Writer’s Player of the Week, click here.