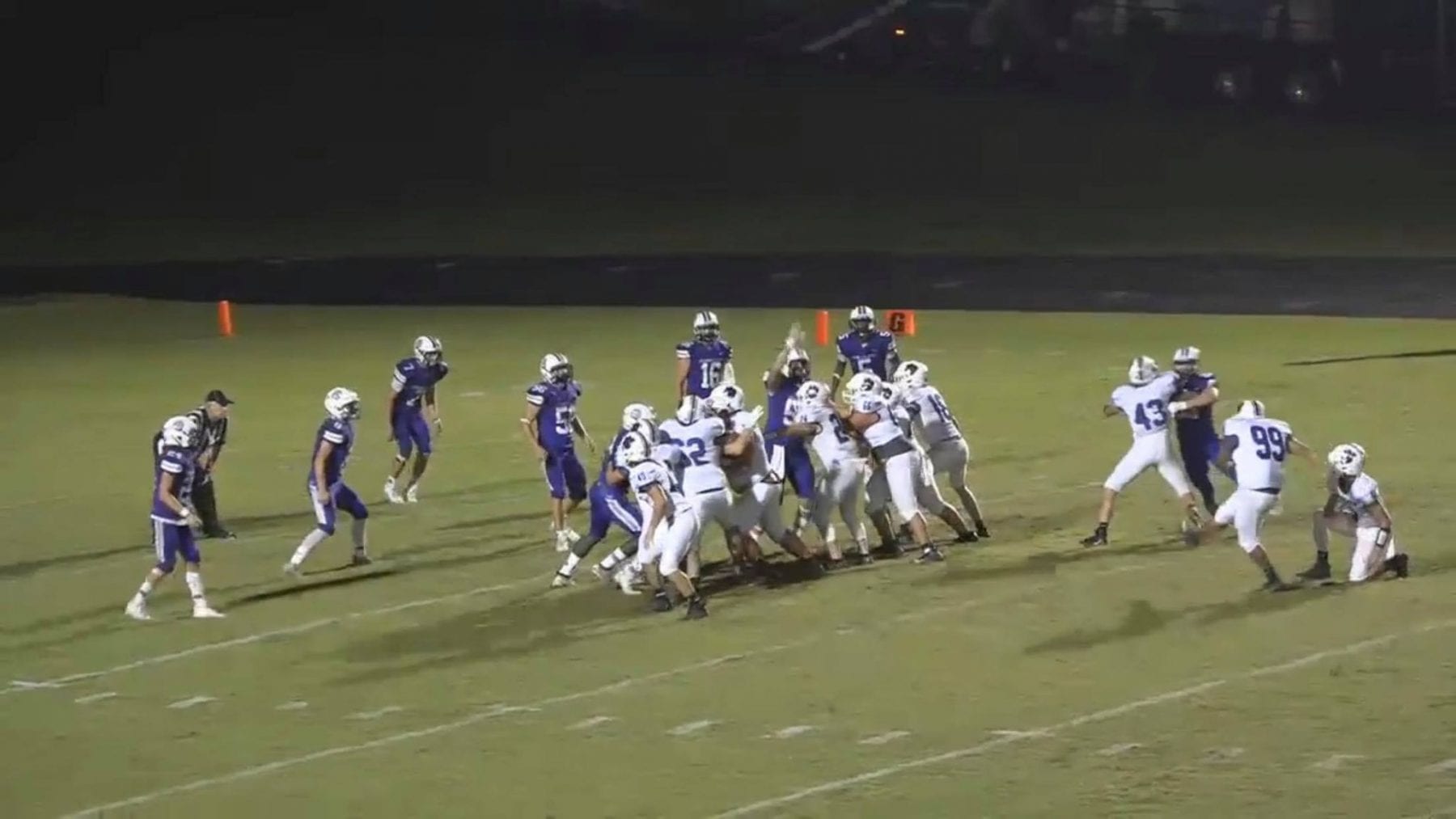 It was slow on the Bluff Friday night. A slow ride down GA-52 in blinding rain foreshadowed what was ahead. The game in Flowery Branch between the Gilmer Bobcats and the upstart Cherokee Bluff Bears was a slow, grinding affair. Cherokee Bluff, led by former Dacula Head Coach Tommy Jones, came into their Homecoming game with a 4-0 record —- more wins than their previous two years as a program combined. Gilmer came in off a bye at 2-1, winners of their last two. It marked the opening game for each team in the new look Region 7-AAA.

Gilmer received the opening kickoff and embarked on a slow, clock draining drive that we’ve become so accustomed to in the Saunders era. The offense was able to convert several third downs and a couple fourth down tries en route to a seven minute march. However, after getting the ball inside the ten yard line the Bears defense was finally able to stop the Cats Wing-T attack. On fourth down the Cats brought on the kicking unit but the wet conditions led to a miss. Cherokee Bluff took over on downs.

We got our first look at the Cherokee Bluff offense. Aside from a couple explosive runs, it became evident pretty quickly the Bears were eager to play Gilmer’s slow brand of football. Their first possession ended with a punt. At the end of the first quarter each team had possessed the ball once with no score.

Gilmer’s second possession looked a lot like their first. It was a slow, methodical march down the field highlighted by successes on third and fourth downs. Like the first drive it reached the Cherokee Bluff red zone and eventually inside the ten. On fourth down the Cats elected to go for it but were stuffed. Once again, Cherokee Bluff took over on downs inside their own 20.

This time around the Bears were able to string together a scoring drive. Cherokee Bluff running back Jayquan Smith punched it in from four yards to go up 7-0 at the half. Smith led all rushers on the night with 136 yards on 16 carries.

After a frustrating first half Gilmer caught a break early in the third after kicking off and forcing a Cherokee Bluff punt attempt. The errant snap allowed the Cats to tackle the punter at the Bears nine yard line. Gilmer took over first and goal with 9:39 left in the third. A  couple of short Kobe Sotnecipher runs mixed with a penalty backed the Cats up to the Bears twelve yard line for third and goal. Despite taking a sack, the Cats were bailed out by a personal foul penalty that put the ball at the two yard line. Kobe Stonecipher took in for the touchdown on the next play. Like the field goal on the opening drive, the PAT was kicked low and no good. That made it 7-6 Cherokee Bluff with 7:43 left in the third.

The Bears got the ball back and started another long, slow drive toward the end zone. Charles Tolbert capped it off with a five yard run into the end zone. The extra point was successful to make the score 14-6 with 3:00 left in the third. A strong answer to the Gilmer touchdown, but still a one possession game and an opportunity for the Cats to tie the game. However, the drive fizzled out two minutes into the fourth quarter and resulted in a Seth Darling punt.

Three plays later Tolbert broke through the Gilmer defense for a 68 yard touchdown run. Undoubtedly the biggest play of the game, the extra point made it 21-6 with 8:19 to go in the game. At the rate Gilmer was moving the ball throughout the game, time was immediately of the essence if they wanted to get back into it. After an impressive kickoff return, they were able to move the ball across midfield before facing a 4th and 3 one yard into Cherokee Bluff territory. After a prolonged injury timeout, Kobe Stoncipher took the handoff and converted, yet again.

The clock proved to be the enemy for Gilmer even as their drive continued deep into Bears territory. They faced another 4th and 3 from just inside the red zone as the game clock went under 60 seconds. Spenser Smith faked the handoff to Stonecipher and rolled left, appearing to have the necessary yardage but was stopped just short on the 16. A metaphor for the entire night.

Cherokee Bluff took a knee to end the game 21-6. Gilmer had their chances, especially early on. They’re a veteran team that looks to control the ball and capitalize on mistakes. Unfortunately on Friday night, they just couldn’t get points on three of their four red zone opportunities. A lot of it had to do with weather and field conditions. There was only one completed pass the entire night, a 33 yard Cherokee Bluff play in the third. Gilmer finished with 174 yards, all on the ground while the Bears gained 288, a third of which came on the Tolbert touchdown.