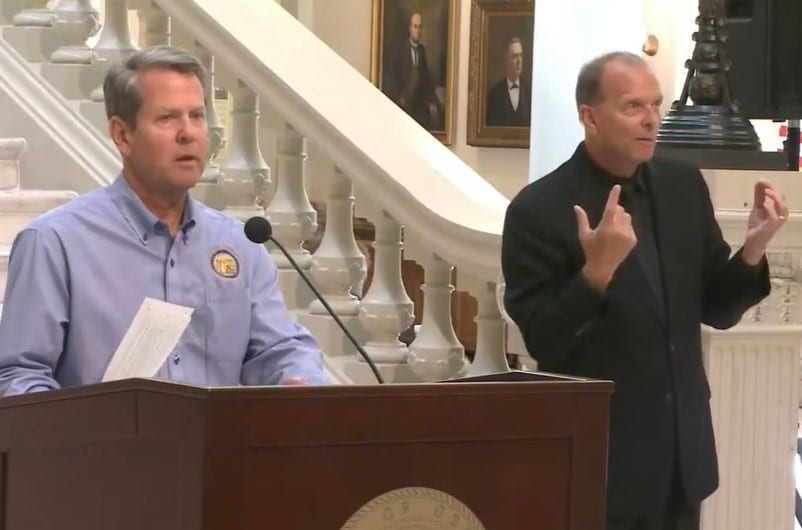 Rather Stacey Abrams and the far left are operating according to their playbook, Kemp called the lawsuit an attempt to further “their extreme agenda.” He reminded Georgians that the far left’s response to SB202 cost the state $1 million when the All-Star Game pulled out. Abrams later said she was against the boycott; however, she initially applauded the move.

According to Kemp, the web address stopjimcrow2 was purchased three weeks before the bill was even passed.

He urged people to “stand up to the woke mob” because they’re coming for Georgians and Americans “next.” Now he stated that they are “not afraid to use the full force of the federal government.”

Kemp proclaimed that he isn’t afraid of Abrams, Garland, or the far-left, citing the two cases he won against the President Obama Justice Department. He “look[s] forward to making it 3 and 0.”

Three days prior to the filing of the lawsuit, the For the People Act – a Democrat-sponsored bill that would alter the election process across the country – failed to pass.

“This lawsuit is born out of the lies and misinformation the Biden administration has pushed against Georgia’s Election Integrity Act from the start. Joe Biden, Stacey Abrams, and their allies tried to force an unconstitutional elections power grab through Congress – and failed,” Kemp said in an earlier statement.

Other prominent Georgia lawmakers and elected officials have commented on the lawsuit, including Speaker of the House David Ralston, which you can read here.

“It is no surprise that they would operationalize their lies with the full force of the federal government. I look forward to meeting them, and beating them, in court.”

Gubernatorial Candidate Vernon Jones (R – Ga) called the lawsuit “meritless.” In a tweet, he added, “Joe Biden’s DOJ is suing the state of Georgia because they think black people are too damn dumb to secure a Voter ID and properly vote.”

“It is disappointing for those of us who respect the rule of law, because this is not a lawsuit, it is a political campaign flier. Falsely using race to scare people of color into believing their vote will not be counted is irresponsible and fundamentally wrong.”

The attorney general also blasted progressive Democrat Stacey Abrams, a vocal opponent of the bill, saying, “Unfortunately for the Justice Department, the Stacey Says Standard does not hold up in a court of law. We have defeated Stacey Abrams in every legal challenge she’s filed since 2018. We remain confident that Georgia’s law will be upheld. “

“After failing to sell the partisan federal election takeover known as H.R.1 to the American people, Joe Biden is now weaponizing the Justice Department to attack election integrity. Democrats are seeking to undermine confidence in elections in the pursuit of political power. The Republican National Committee will use every tool and resource at its disposal to intervene and fight these left-wing power grabs.”