Last night at the Ellijay City Council meeting a brief introduction to the Affordable Housing Plan was introduced.  At the request of Mayor Al Hoyle, Kent Sanford, Director of Joint Development Authority, also present at the meeting, was asked by the mayor to give a brief description of the proposed 3 year resolution passing application for affordable housing.  It would include three municipalities working together with a panel of twenty committee members.  Mr. Sanford stressed that it would be an educational opportunity to learn about the Affordable Housing Act only prior to the making of any commitments. Sandy Ott, a current council member, stated she would volunteer to be on the 20 person committee. Only one citizen at the Monday night meeting raised a question about the idea that she believed it would be a more in depth process. She referenced information from a flyer she had found on the website.   She believed it would be a more detailed process in consideration of the huge community debate on zoning and housing.

Meeting began at 6 pm with opening prayer and pledge of allegiance.  The approval of agenda, as well as June meeting minutes along with the June financial statement, were all approved. There were no staff reports and just one citizen’s input noting the request to table the decision on the passage of the resolution supporting the application for affordable housing. Next on the agenda was Old Business. Mayor Hoyle stated first item was the first reading of the short-term rental ordinance which required no action at this time and would be addressed at the next meeting. 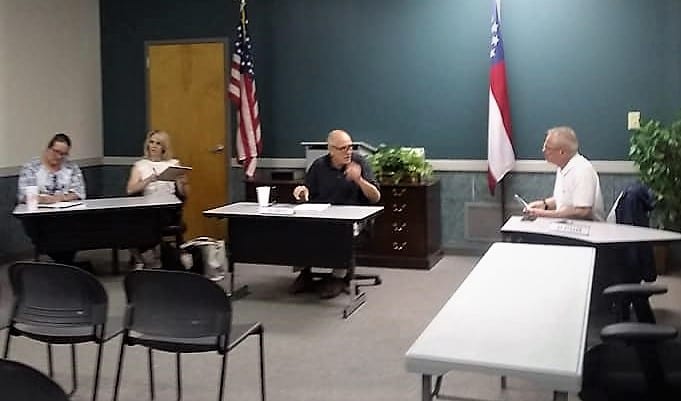 New Business included a motion review and action on Resolution on supporting Gilmer County’s participation in the Community Housing.  Motion to pass and accept was made with one abstention per a conflict of interest. Next was a review and action on mowing and maintenance agreement of the old round-a-bout on SR 382 and old highway 52. The city has been responsible for the mowing and maintenance of the round-a-bout and the discussion was about the feasibility of continuing the expense.   The council agreed it would put a burden on the city considering the city does not get reimbursed for this maintenance and the council agreed.  One member made a motion to Table but it was not seconded so the motion died due to lack of interest.

Next was review and action on the resolution to initiate a voter referendum to authorize the issuance and licenses of package sales in the city of Ellijay.  The motion passed with all in favor. The council then went into executive discussion behind closed doors.  After a short period council returned and announced the hiring of their new Code Enforcement Officer, Andrew Mathis. At that time council adjourned with no further business.