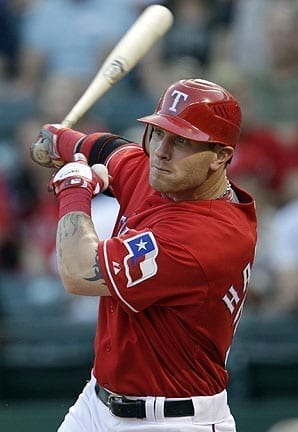 Texas Rangers center fielder Josh Hamilton was named the American League MVP award today. Hamilton hit 32 home runs, 100 RBI, 40 doubles, and three triples. He also led the AL with .359, and .633 on base slugging percentage, as well as being second in the AL with .411 on base percentage. Hamilton received 22 first place votes, and finished with 358 points.Hamilton was also voted the MVP of the ALCS after the Rangers bested the NY Yankees in six games to take the Rangers to their first World Series before losing to the San Francisco Giants.

Hamilton, who has a long history battling drug and alcohol addiction, has been to rehabilitation facilities eight different times. However, he overcame his demons to become the sixth Ranger to win the award, the most recent being Alex Rodriguez in 2003.

Detroit Tiger Miguel Cabrera finished second with five first place votes and a total of 262 points. He had 126 RBI and a .420 on base percentage. Third place finisher, Robinson Cano of the Yankees had 229 points.

Information from the Associated Press was used in this report.