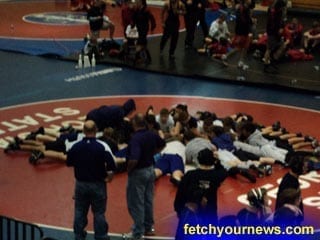 At the Parkview Duals the day before Thanksgiving the Gilmer County Bobcats wrestling team made turkeys out of their competition sweeping another duals tournament with a combined score of 226-158.The Bobcats’ first victims were the Blue Devils of Tift County, who they downed 48-22. Head coach Sam Snider decided to let a great deal of his junior varsity wrestlers get some experience on the day, some even via exhibition matches, that of course did not have a negative impact on the win total for the Bobcats.

Hillcrest was the Bobcats closest competition on the day, falling 40-37, however, the final score was not indicative of the control that the Bobcats wielded throughout. The Eagles were able to make it close by taking advantage of two forfeits late, the last one caused by an injury to 189 wrestler, Ben Deloach, who pulled up lame with a leg injury. Deloach, who sported a Superman shirt throughout the day, sat due to the injury which became his kryptonite for the day. The Eastside Eagles were bested 47-33. They did lead after the first match when heavyweight Austin Sprayberry was pinned in the first match, however, the Bobcats tied on the next match when 103 Mel Mosley pinned the Eagle 103 who couldn’t have weighed 95 pounds soak and wet with bricks in singlet. The match was back and forth until 125 Brady McCollum pinned his opponent with a cross face cradle. From that point the Eagles would keep it close, but the Bobcats never gave up the lead.

Gilmer beat the host Parkview Panthers 45-36. The match was a highly contested back and forth affair until senior Ian Smith, wrestling 189, picked up a forfeit to put the Bobcats up by three. His forfeit was followed by James Longenerner win via pin which put the match out of reach for Panthers. The Bobcats last match of the day was against the Red Devils of Loganville, who had to beat a Woodcrest team featuring the most boisterous, excitable coach of the day. The Red Devils reward, however, was a 48-30 thrashing by the Bobcats. Gilmer was never in danger, despite losing the first match by major decision (eight or more points, which counts as a four team points).