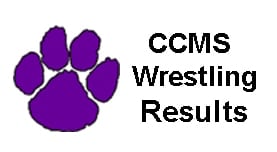 CCMS – Wrestling Tue,  December 1, 4:30pm – 7:00pm, Blairsville, Union County.
We were pleased with results tonight. Not just in terms of the team scores, but some of our kids wrestled more focused and intense. We had one match in particular that turned in our favor from the last time we wrestled Fannin at 102. They also bumped a few of their wrestlers to different weight classes which was a smart effort by Coach Padgett to try something different. We stepped up to the challenge and wrestled well in those matchups.

Union has done a good job of getting out and filling a complete team. They also have done so with strong, athletic students. With more experience they will be a team to be reckoned with. We were able to get on a pretty good roll to start with and our wrestlers seemed to feed off of each others wins and the momentum just continued to escalate in our favor.

We stand at 7-0 for the year thus far with Dawson and Union coming up Thursday, December 3 at Gilmer Middle School and Pickens Tuesday, December 8 at Pickens Middle.