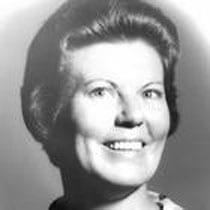 Mrs. Garland was born December 16, 1929 in Birmingham, Al the daughter of the late Jay and Agnes Nabors Duckett. She was a former employee of Gilmer Nursing Home and member of the Pisgah Church of Christ.Mrs. Garland is preceded in death by her husband Joe Garland.

She is survived by two sons; Jay Garland and Floyd Garland, both of Ellijay; and two daughters; Brenda Joe Garland of Rome; and Karen Granados of Acworth; 9 grandchildren, 9 great-grandchildren also survive.

Funeral Service will be held Saturday August 13, 2016 at 1:00pm from the chapel of Bernhardt Funeral Home with Minister Butch Jones officiating. Interment will follow in the Pisgah Church of Christ cemetery.

The family will receive friends at Bernhardt Funeral home on Friday August 12,2016 From 5:00pm until 9:00pm.

Bernhardt Funeral Home in charge of the arrangements.