The schools utilize this information when creating plans for next year as they see what areas need help and what areas have succeeded with current teaching methods.

The following is a release from Superintendent Dr. Shanna Wilkes:

The CCRPI is Georgia’s statewide accountability system, implemented in 2012 to replace No Child Left Behind’s Adequate Yearly Progress measurement (AYP). It measures schools and districts on a 100-point scale based on multiple indicators of performance.

Five of Gilmer County Charter Schools six schools saw an increase in their CCRPI scores compared to their 2016 scores.

Ellijay Elementary School (EES) made an impressive gain of 13.6 points with a 2017 CCRPI score of 81.1, compared with a 2016 CCRPI score of 67.5. Lauree Pierce, principal at Ellijay Elementary School, stated, “The data indicates that EES is heading in the right direction. To add to the excitement, changes implemented in the 2017-18 school year are sure to have a positive effect on these numbers next year.”

On Nov. 3, Pierce and her administrative staff cooked a steak lunch with homemade desserts for all EES staff to show appreciation for all their hard work.

For Gilmer County Charter School System, the averages for elementary, middle and high school were 74.3, 79.1 and 71. The district average is 75.2, which exceeded the state average. 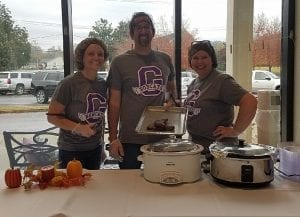 EES staff are treated to a steak lunch in celebration of the hard work to get the school to a 13.6 point increase on the 2017 CCRPI.

Ellijay Elementary, Gilmer Middle and Clear Creek Middle are well above the state CCRPI average; however, there is still continued work to be done.

Gilmer High Schools’ graduation rate is well above the state average and we are working to close the gap on CCRPI performance at the high school level.

Our teachers, leaders, and staff have worked diligently to focus their efforts on student achievement and success. The hard work and dedication of each school’s team led to the improved CCRPI scores and they should definitely be commended.