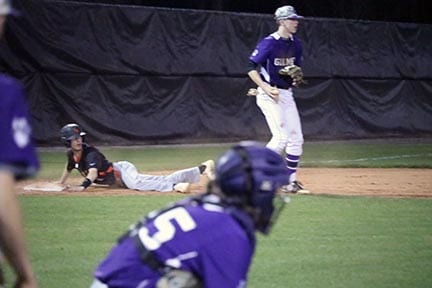 In Game two of a doubleheader on Friday , the Bobcats were looking to take a three game series from the Ramblers of Lafayette High School.  The Bobcats took games one and two outscoring the Ramblers fifteen to three in the two previous game.  The Cats Bats have been hot and the defense spot on so far in the series and in the third and final game of the season, the second of the night, the fans were hoping to see them continue the win streak.

Evan Frady slides into 2nd on a lead off double

The Bobcats struck first after back to back doubles in the bottom of the first inning by lead off batter Evan Frady(straight away center) followed by Hunter Bowyer’s deep ball off the left field fence which scored Frady from second base. Over the next 6 innings the Lafayette pitcher settled in his rthym to keep the Cats off the basepads allowing just 2 hits and 3 walks which calculated up to just one run for the home team. The Ramblers struck for three runs in the top of the fourth giving them enough to take game three and avoid the region series sweep.  Adding one in the top of the seventh inning sealed the deal scoring 4 runs on 5 hits and committing 2 errors.

The Cats, 2 runs on 5 hits and committing 4 errors gave their all but couldnt out duel the opposing defense.  The Cats take two out of three and feel they are getting back on track after a slow start to the 2018 season.

Stand outs for the Cats offensively were Evan Frady 2-4 with 2 runs scored, Hunter

Bowyer 2-3 one walk and one RBI and Will Barnes 1-3.  Defensively, on the mound for the Cats Evan Frady gave up 3 runs(all earned) on 3 hits and 6 strikeouts and Bradley Thomas gave up 1 unearned run and 1 strikeout.

The Bobcats will host  Northwest Whitfield at Bobcat Field on Tuesday starting at 5:55 pm. 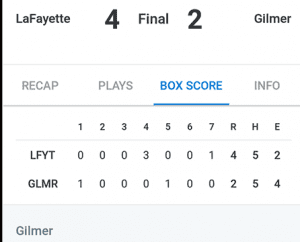 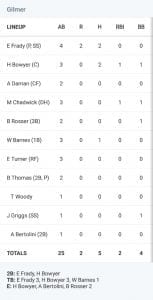