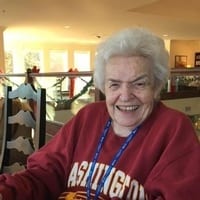 Shirley Fenby Hosch, formerly of Cumming, passed away Tuesday, May 8th, at the age of 96. She was born on April 20, 1922 in Edmonton, Alberta, and moved to the U.S. during World War II to work at Wright-Patterson Air Force Base near Dayton, Ohio. It was there that she met her future husband, Walter Edward Hosch of Gainesville, Georgia. Prior to their marriage in 1949, she proudly became a United States citizen, yet always maintained pride in her Canadian heritage. As a young woman, her hobbies included playing the violin and painting, while in later years she enjoyed knitting, playing bridge, and creating exquisite petit-point and cross-stitch pictures. Most of all, however, she loved watching her grandsons, Chris and Brett, play soccer, and countless happy hours were spent at their games. Shirley was known by her family and friends to have a tender heart, especially for animals, yet with a remarkable strength of character. With her passing, Heaven surely got a little sweeter.