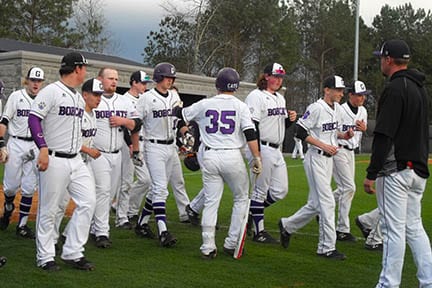 The LaFayette Ramblers came to the Hill at Gilmer High School on Tuesday for game 1 of 3 in region 6-4A baseball.  The Cats were looking to rebound after falling to the Dragons in a couple of really close ballgames. 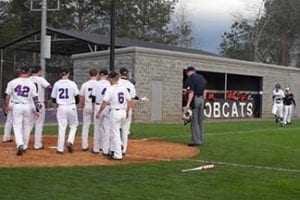 In the game, the Gilmer Bobcats showed that power could come at any point in the line up as three of their nine hits on the day saw the baseball go over the fence and into the pines.  The boys of summer for the Cats came up to the plate pumped and ready and left their mark on the board early. After a fly out by Evan Frady,  Hunter Bowyer coaxed a walk as the 3-1 pitch missed the zone.  Daman would also fly out to centerfield for out two and set the stage for the excitement about to happen.  Jake Rhodes at the plate with 2 outs, drove a 2-1 pitch over the left field chainlink scoring David Smith(Courtesy Runner for Bowyer) and quick 2 run lead.  Tyler Woody was hit by a pitch but left stranded.  The bottom half of the third once again saw a Bobcat at the plate flex some muscle with 2 outs.  This time Jonas Griggs got in on the action as he took the baseball over the centerfield fence for a solo home run on a 2 ball and 1 strike count from the Ramblers pitcher.  In the top of the fourth, LaFayette started to mount a comeback scoring three in the inning. The combination of a walk, two singles, and a double pushed across Pettigrew and Daniels for the Ramblers.  With a 3-3 score at the start of the home half of the fourth, the first three batters for Gilmer was Buckner, Bertolini, and Griggs. Jess Buckner had a leadoff walk followed by a single from Avery Berolini.  Griggs, who homer his 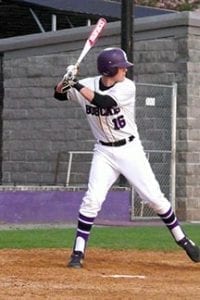 last time up showed up again and this time put 3 runs on the scoreboard with a 3 run home run over the same centerfield fence with no one out.  As earlier in the game, the visiting half of the seventh had the Ramblers mount a small come back and move in front of the Cats for the first time on the evening.  Three singles, a walk, and a Gilmer error put four runs up for LaFayette.  Finding themselves trailing with one last chance at the plate, two walks, two fielder’s choice and one single brought home Jonas Griggs for the tying run to force extra innings.  The Ramblers went quietly in the top of the eighth leaving the home team needing just one run to take the region victory and a short losing streak.  Woody led off with a walk, Gabe Wolfson followed with a single to put Branson Teague(running for Woody) in scoring position.  Teague advanced to third on a wild pitch by A. Mann who entered the game to pitch at the top of the half inning. Jess Buckner hits a ground ball to the Rambler shortstop scoring Teague for the game-winning run and close out the game 8-7 in the eighth inning. 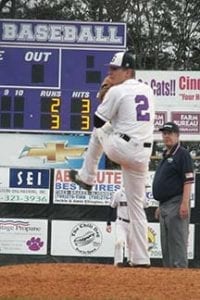 Not only did Buckner get the game-winning RBI but he also was credited the win on the mound.  Buckner came to the mound as relief for Evan Frady who started the game for the Bobcats.  Frady threw 113 pitches over 6.1 innings giving up 6 runs on 4 hit, 5 walks, and 2 strikeouts. Buckner got the win throwing 34 pitches over 1.2 innings with 1 run allowed on 3 hits with 1 walk and 1 strikeout.  At the plate, Jonas Griggs led all Gilmer batters.  Griggs was 2 for 3 with 2 home runs, 4 RBI, and 3 runs scored. Buckner followed with a 2 for 4 game with 1 RBI, and 1 run scored.  Overall, the Gilmer Bobcats scored 8 runs on 9 hits and committed three errors.  The combination of Frady and Buckner allowed 7 runs on 7 hits and the Ramblers committed 2 errors on the night.  These two teams will meet up again on Friday afternoon at the home of the Ramblers.  Doubleheader play starts at 5 PM.