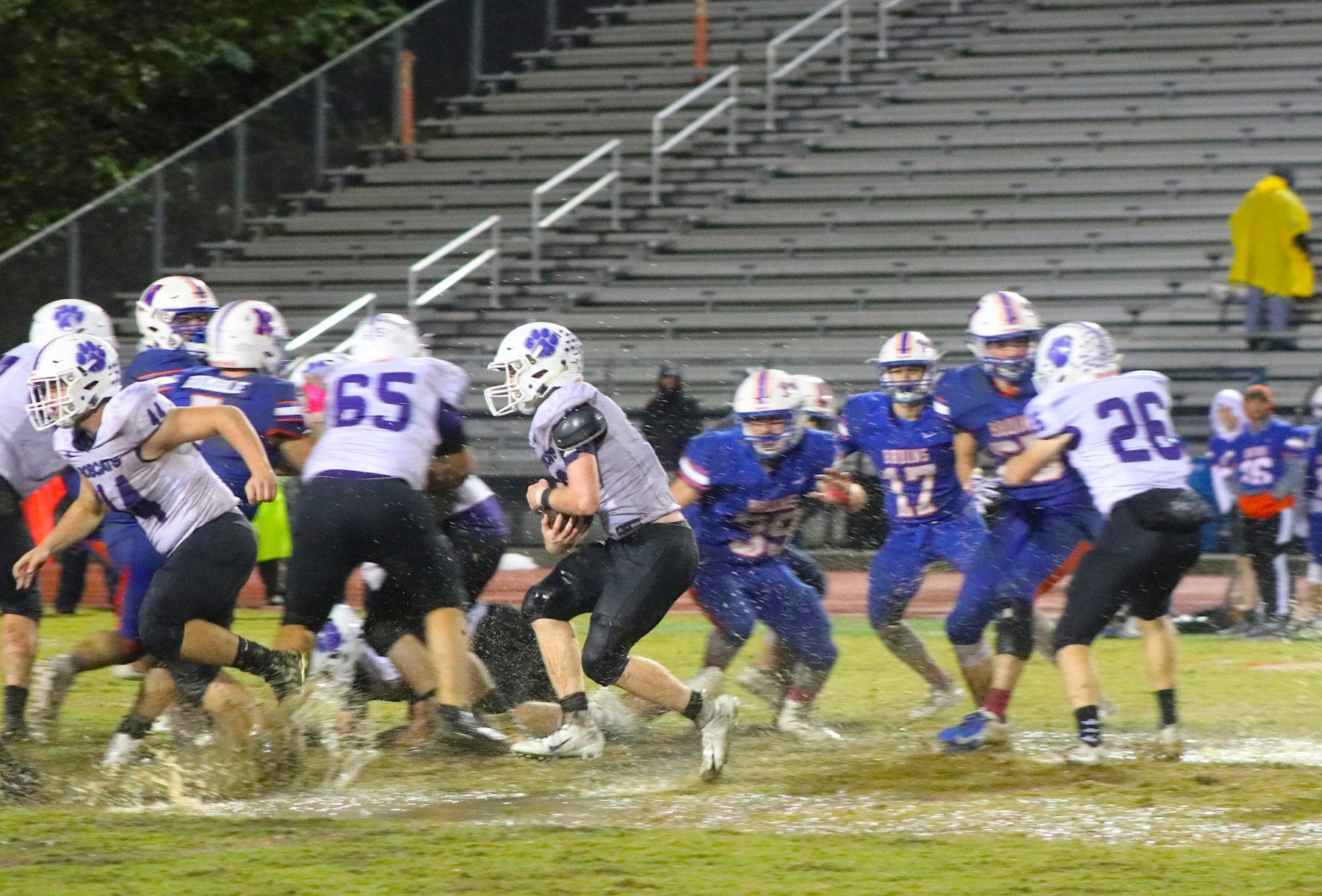 Tunnel Hill, GA — The rain Friday night at Northwest Whitfield High School came in just about every possible way, shape, and form. There was the steady mist, the straight downpour, the wind aided sideways rain, and of course, at times it seemed as if the rain was coming up from the ground. Needless to say, it created the toughest of conditions to play football. To stay with the theme, Gilmer certainly could have used Forrest Gump last night. However, even the All-American turned war hero would have had trouble on this field. 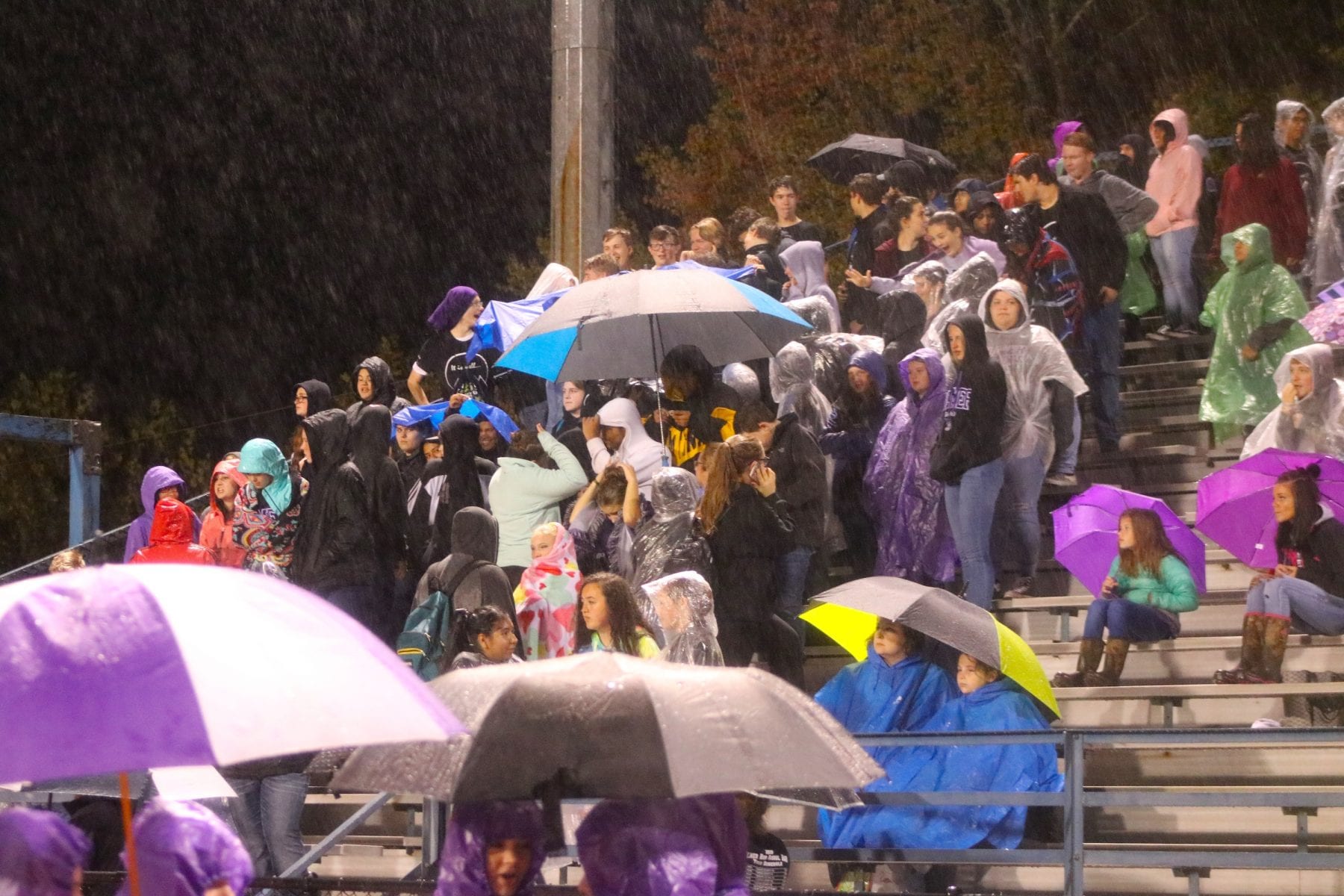 Gilmer fans cheer on the Cats despite the rain.

Gilmer kicked off to the Bruins to start the game and forced a punt. Pinned deep in their own territory, the Cats were unable to get anything going. The ensuing punt gave Northwest a short field. They took advantage of it by scoring on a Gavin Ellis run up the middle from the 2 yard line. The PAT was no good. 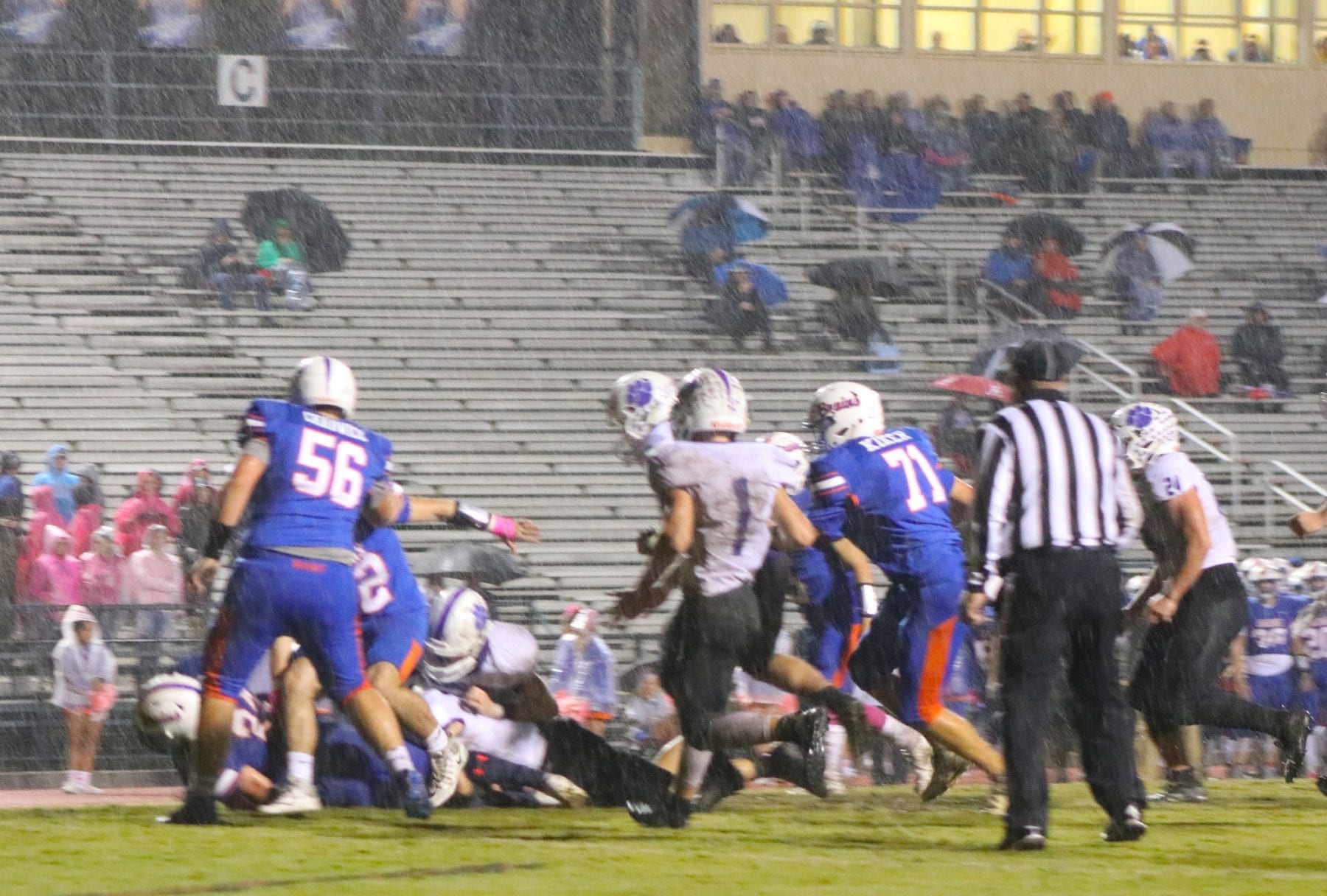 Gavin Ellis scores for Northwest in the first quarter.

We could stop it here. It was 6-0 with 2:21 left in the first quarter and it stayed that way. The rest of the game was filled with stalled drives, punts, and lots of defense from both teams. Given the conditions, neither team felt comfortable throwing the ball. Thus, a constant running clock from all the running plays made the game fly.

It turned into a chess match of field position. Both teams started deep in their own territory most of the night and were able to gain just enough to flip field position.

Gilmer’s best drive of the night came late in the second quarter. They moved the ball down to the Northwest 27 yard line. Facing a 4th and short, Gilmer decided to go for the first down. Northwest stopped the run to turn the ball over on downs. Spenser Smith then intercepted Freshman QB Owen Brooker on the ensuing drive to put the Cats in excellent field position. Unfortunately, only 5 seconds remained on the clock.

Each team continued to trade possessions in the second the half, though neither could get very far. Gilmer got inside of Bruin territory twice in the third but were forced to punt when the drive stalled. But the defense kept coming through, making big plays. They stopped Northwest on 4th down from the Cats 34 yard line with 7 minutes left, but it came at a cost. Starting QB/FS Spenser Smith was lost to a foot injury. After the game, Head Coach Kevin Saunders said he expects Smith to miss the rest of the season. Sophomore Seth Darling was pressed into service under center for the rest of the game. 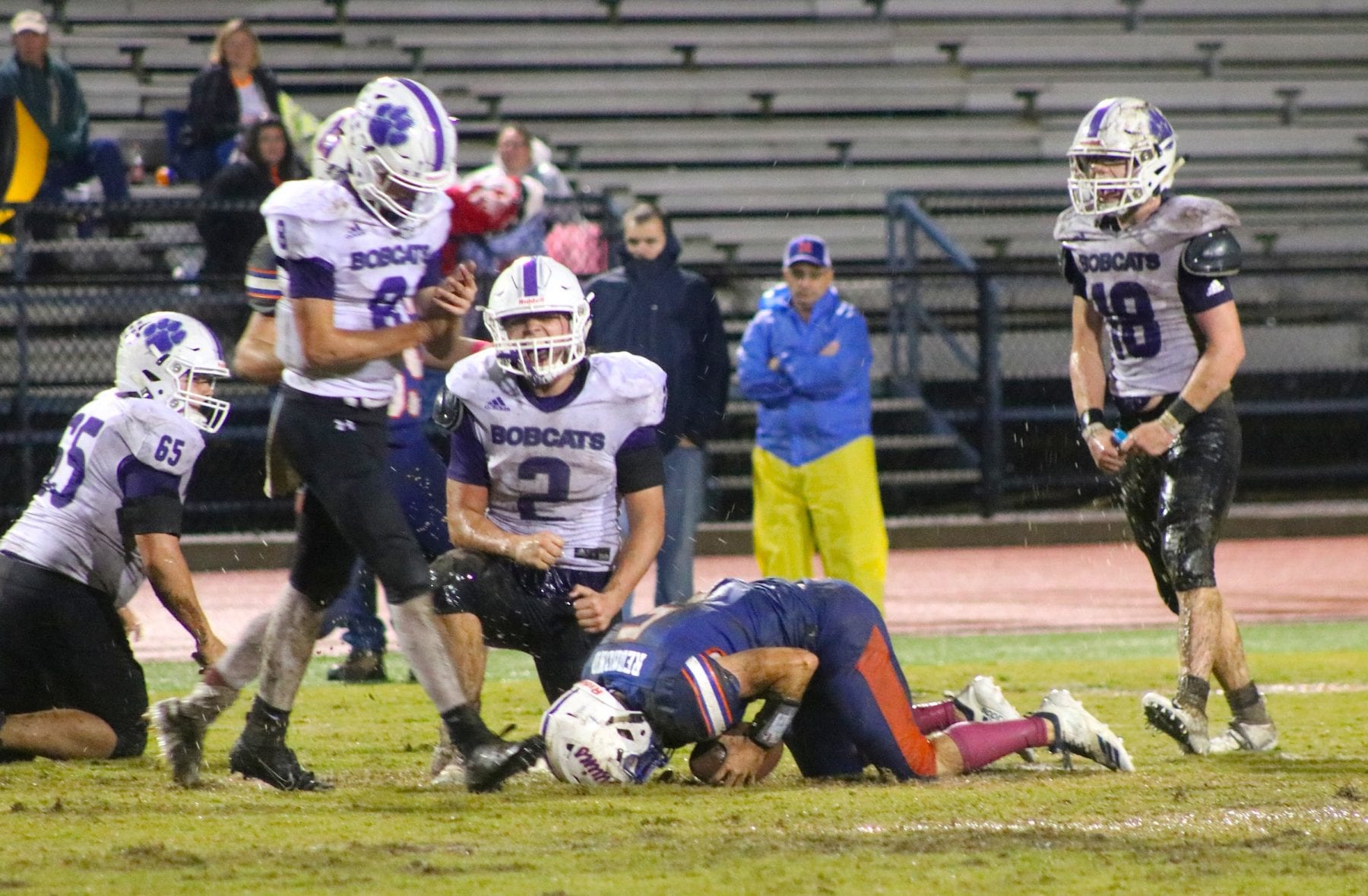 Gilmer Defense Stops Northwest on 4th down late in the game.

The Bobcats took a shot on the second play of the drive. A well thrown ball by Darling to Braden Jenkins fell just short down the right sideline. Despite the dwindling clock, the decision was made to punt the ball away.

The Gilmer defense buckled down yet again to get one more chance with less than a minute remaining. 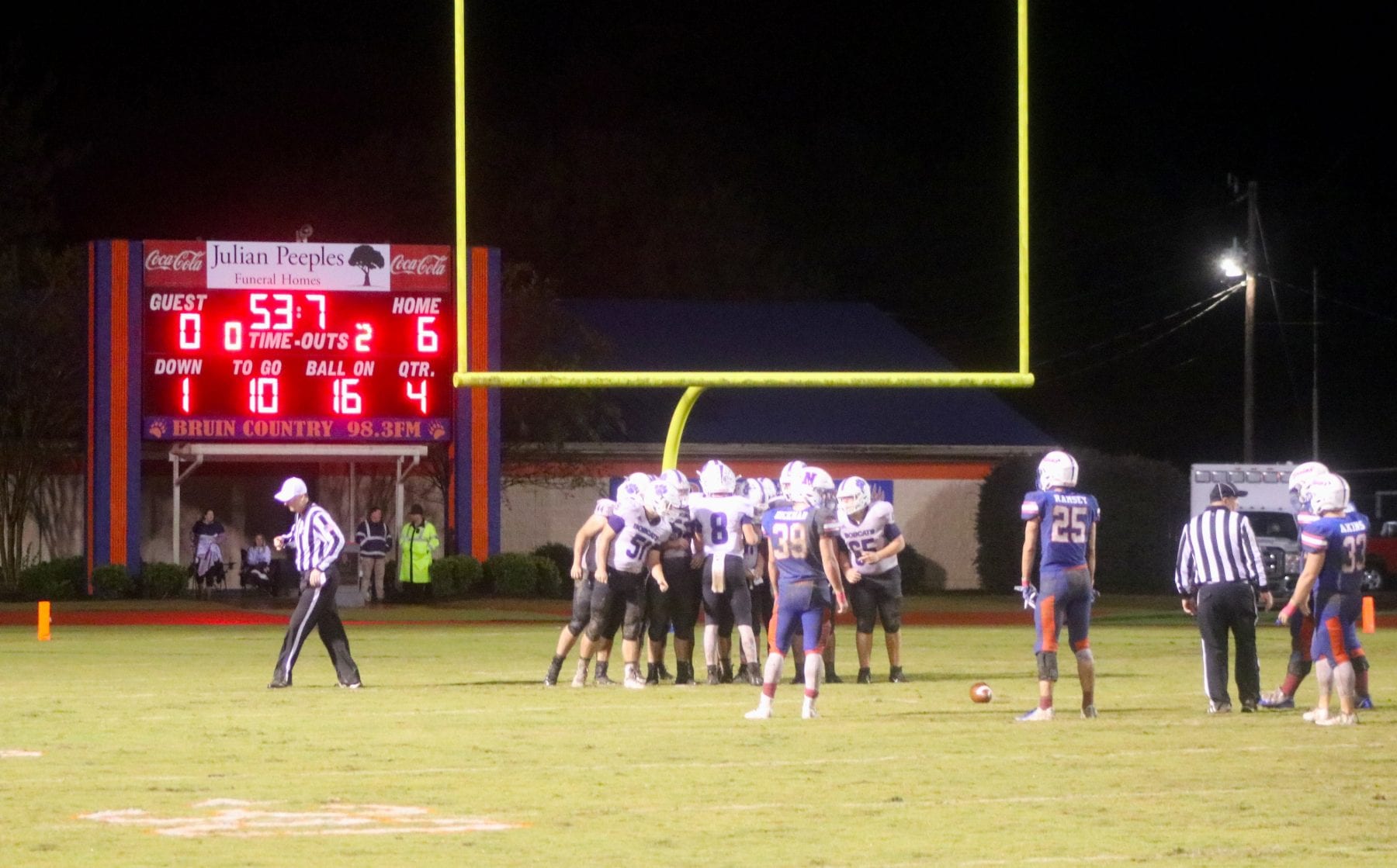 Gilmer Offense takes the field with with less than a minute left.

The last drive was bizarre. Darling found Kobe Stonecipher over the middle for a big gain across midfield. Inexplicably, the officials neglected to blow the whistle to signify the resumption of the clock. This left Darling under center, waiting for the whistle so he could take the snap and spike the ball. Almost 10 seconds had run off before Darling realized the whistle was never coming. Another 15 seconds ran off when the spike was not ruled an incomplete pass. The result of the chaos was 15 seconds on the clock with 50 yards to go. Darling was forced to throw it up for grabs. It was intercepted by Matt Redmond to seal the Bruin victory.

Afterward, Head Coach Kevin Saunders said “we had our chances, we just did not block very well… the offensive line just got whipped, there’s no other way to say it.”

Saunders also commended the defensive effort. But he was right, Gilmer had their chances. Earlier in the season it was exciting to be in these games late with a chance to win. However, when enough of them go the other way it becomes rather frustrating. The playoff hopes aren’t quite over, although the Cats will need to win out and get lots of help from others in the region. Yet, these remaining games still matter. Crazy things happen. They’re still alive to keep playing beyond October.