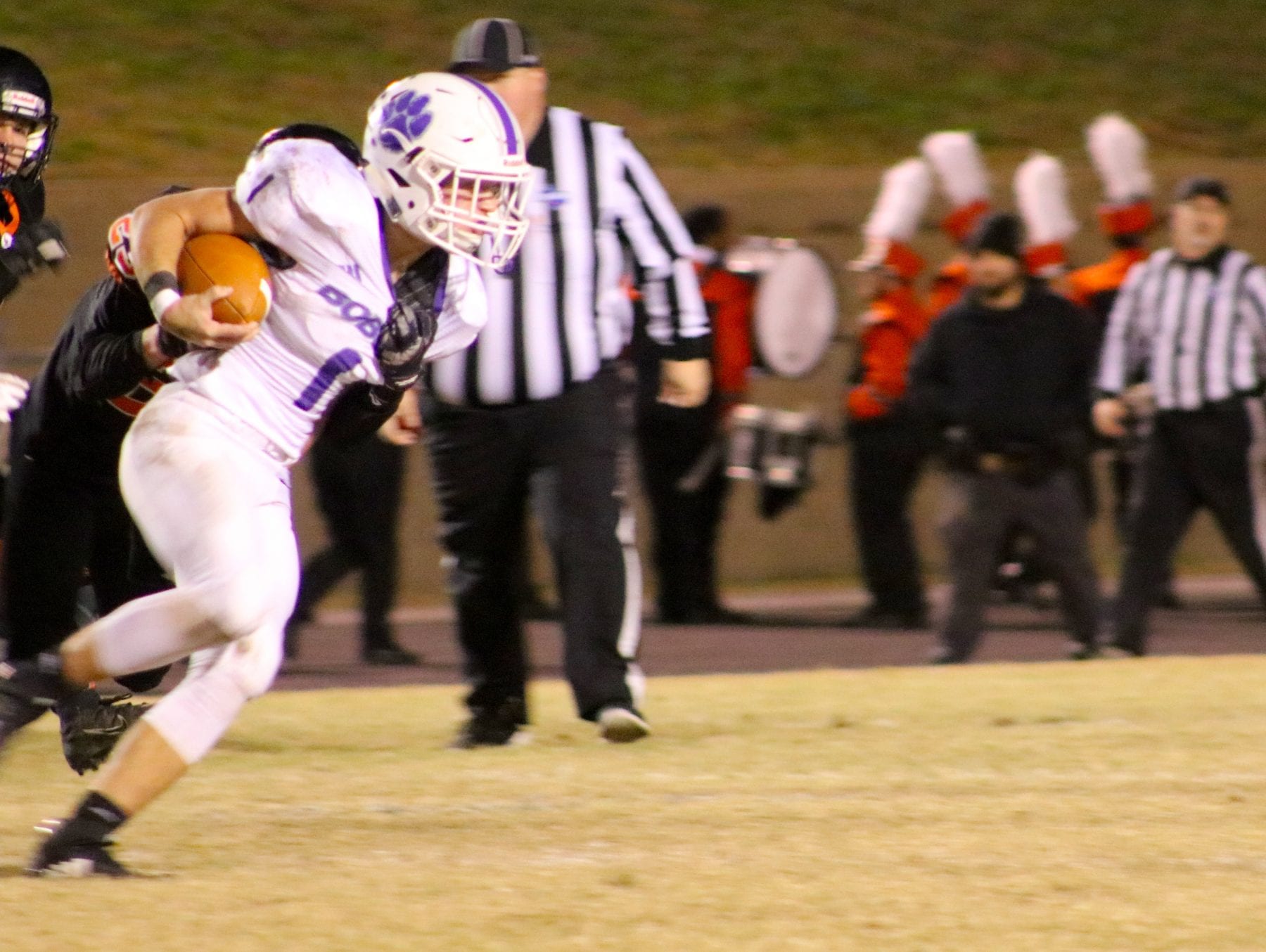 LaFayette, GA — First a bit of housekeeping. This is part of a three-part series to wrap up the season. So I will keep the commentary light on this one. Be on the lookout tomorrow for my thoughts on the season. Then the final post Tuesday for a look ahead to next year, featuring comments from Head Coach Kevin Saunders.

Now, on to the game. The Cats made the long trip to LaFayette Friday night to close out the season. The Ramblers of LaFayette entered Senior Night on a four game losing streak, having lost a heartbreaker to Pickens last week. Like Gilmer, they were officially eliminated from playoff contention. Despite those circumstances, and the near freezing temperatures, the atmosphere inside the building was lively. Maybe it was the vehicle on the LaFayette sideline shooting flames up in the air like a pro wrestling match. 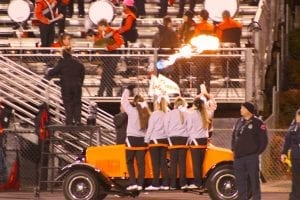 Gilmer was missing three of their key two-way players in QB/DB Spenser Smith, QB/DB/P Seth Darling, and LB/TE Kyle Allison. This forced younger players to step in and role players to step up. The first drive for LaFayette after taking the opening kickoff proved they were all up to the task. They forced a quick three and out. 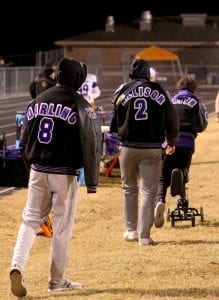 The Cats then struck quickly with the ground game. Freshman QB Will Kiker made his debut under center. On Monday’s edition of Gilmer Turf Talk, Saunders indicated full confidence in Kiker’s ability to manage the offense without having to do too much. The first drive was a perfect way for him to get acquainted. A big Kobe Stonecipher run set up his early TD. Adolfo Bautista’s PAT made it 7-0 Gilmer barely three minutes into the game.

Sophomore Quarterback Jaylon Ramsey led the Ramblers spread option running attack. Lafayette’s offense responded to the Gilmer score by putting together a drive lasting the rest of the first quarter. It included a couple big Ramsey runs. They capped it off with a Ramsey run from inside the five yard line to even the game at 7.

The Bobcat offense was then forced to punt on the ensuing drive. Junior RB/DL Ashton White was pressed into action in Darling’s absence. Lafayette got the ball back and looked to be moving the ball, but they fumbled it away to the Cats defense. LaFayette fumbles would become a major theme of the night. 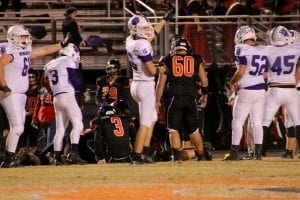 Gilmer’s offense could do nothing with the favorable field position. After picking up a couple of first downs they went for it on 4th and short with no luck. The Ramblers took the ball back and began rambling right back down the field. Ramsey had another long run to get into Bobcat territory. On the following play Ramsey rolled right looking to take off again, the ball slipped out and into the hands of Bobcat Junior DB Kanaan Walker. Perhaps the fastest player on the team, Walker took the loose ball and ran it down the sideline untouched for a 55 yard defensive touchdown. Bautista’s PAT made it 14-7 Gilmer with only a few minutes left in the half. 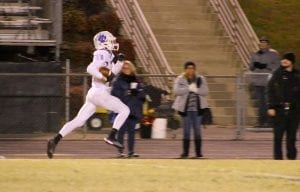 Kanaan Walker to the house.

You would have never known Ramsey had just fumbled away a touchdown. He led the Ramblers right back down the field. Ideal clock management allowed them to score on another Ramsey run to tie the game with just 6 seconds left. 14-14 at the break.

The undermanned Bobcat offense were forced to punt on their first drive of the second half. In return, LaFayette drove it down inside the Gilmer 10 yard line. The Bobcat defense responded with one of their most impressive stands of the season, forcing a field goal attempt. It was good and LaFayette led 17-14.

The lead was short lived. Gray McClure busted through the defense for a 58 yard touchdown run to put the Cats back on top with 4:51 left in the third quarter. Adolfo Bautista remained perfect on the night to make it 21-17.

Ramsey led the Ramblers back out looking to respond. Despite breaking a couple of big plays, both were called back due to penalty. They were forced to punt. Gilmer then ran a double reverse pass from McClure, who pitched to Junior Braden Jenkins, who then threw it down field to Kobe Stonecipher. A few plays later the Cats offense was inside the five yard line as the clock expired on the third quarter.

Jenkins throws it down field on the double reverse.

The Cats took their time to start the 4th despite being inside the 5 yard line. Stonecipher ran it in from the 2 for his second touchdown of the game. Then, in what can only be described as the highest extra point kick in football history, Bautista knocked it through to make it 28-17 with 10:50 to go.

The Gilmer defense buckled down once again. They allowed LaFayette to get down the field slowly, taking all the time they needed. The Ramblers then lost Ramsey to injury. They were forced to put Senior WR Chase Keith in the game. Although clearly not the primary QB, Keith brought a sense of stability to the drive. The shotgun spread was condensed to a Wing-T look. Junior Jamario Clements ran it into the end zone from three yards out, with just 5:56 left in the game. The two point conversion attempt was stopped to keep the score 28-23.

Looking to put the game away, Kiker and the Gilmer offense went back on the attack. They forced LaFayette to use the rest of their timeouts but had to punt it away with under a minute left.

Then things got interesting. Wearing number 28, Chase Keith lined up at Quarterback looking to take four shots at the end zone from midfield. He nearly connected on the first play, but he over threw a wide open receiver streaking down the sideline. After that, the Gilmer defense kept the Rambler pass catchers in front of them. They stopped the next three plays for no gain.

Fittingly, the Freshman QB was able to take the knee and seal the Bobcat victory. It was a big win to cap off a turnaround season for Gilmer. After the game Head Coach Kevin Saunders had a special moment with his team, thanking them for their effort. Then he met with the emotional Seniors, who walked off the field for the final time as winners.

Kiker takes a knee to end it.