With a slim, 40-38 win against Fannin Co. on Tuesday, Nov. 26, the Gilmer High boys basketball team moved to 3-1 on the season and placed second in the annual Thanksgiving tournament in Blue Ridge.

The Bobcats started the tournament Saturday, Nov. 23, against area-rival Pickens (2-2). While both team are from Region 6-4A, the game did not count toward either team’s region schedule. 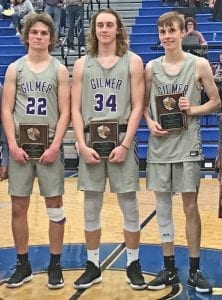 From left, Braden Jenkins, Cade Carter, and Brady Sanford were each named to the all-tournament team for the Bobcats.

Gilmer lost the game 67-64 after entering the final quarter tied at 50 each.

Despite Braden Jenkins scoring seven of his 10 points in the quarter, the team couldn’t slow down the Dragons who pulled away late to earn the three-point win.

Sophomore center Cade Carter had a team-high 20 points, including 10 in the first quarter to propel the Bobcats into the early 23-17 lead at the end of the opening period.

Luke Wimpey scored 15 points from his guard position, while junior Brady Sanford and Braden Jenkins each added 10 in the loss.

Junior Carson Pierce scored nine to round out the scoring for Gilmer.

The Bobcats rebounded against Hiwassee Dam on day two of the tournament Monday, Nov. 25. Gilmer earned the 52-35 victory led by Sandford’s 17 points and Carter’s 16.

Against the Rebels in the second-place game Tuesday, Nov. 26, Sanford again led with a game-high 17 points. He was clutch late as the Rebels stormed back from being down seven at 30-23 to start the period. Sanford hit a pair of 3-pointers in the final quarter to give the Bobcats the narrow victory in spite of the team shooting just 2-of-7 from the free-throw line in the quarter.

Jenkins scored 13 points, while Wimpey and Carter each added four. Mulkey rounded out the scoring effort from the Bobcats with two points in the win.

Sanford, Jenkins, and Carter were each named to the all-tournament team for the Bobcats.

Up next for Gilmer is the first Region 6-4A game of the season against Southeast Whitfield Co. That game is set to tip-off at 7:30 p.m., Tuesday, Dec. 3, in Blue Ridge.

The Bobcats split their two games with the Raiders last season.

To read about the TeamFYNSports Writer’s Player of the Week for the Bobcats, click here.