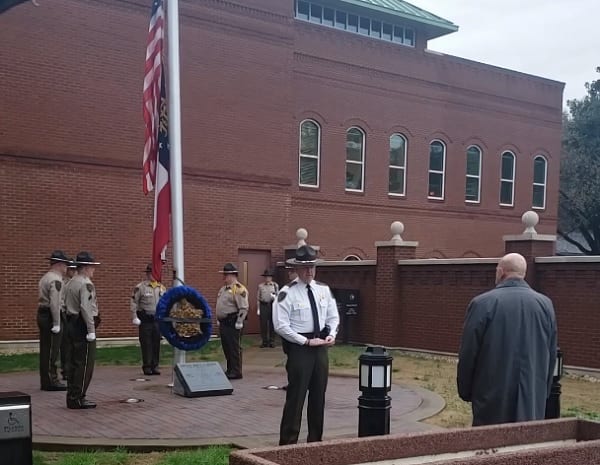 ELLIJAY, Ga. – A somber day in Gilmer County began in the rain today for officers of the Gilmer Sheriff’s Office as they remember the anniversary of their fallen comrade, Deputy Sheriff Brett Dickey.

Today marked 24 years since Deputy Dickey, age 30, was shot and killed while serving a warrant on February 13, 1996.

The Sheriff’s Office held a memorial for Deputy Dickey today, as they do every year. The office stated, “We will never forget our fallen deputy, Brett Dickey, but we especially remember him today, 24 years since we lost him in the line of duty, Feb. 13, 1996.”

Listed on the Officer Down Memorial Page, Deputy Brett Dickey’s memorial offers the information on his service:

Deputy Sheriff Brett Dickey was shot and killed while serving a warrant.

Several officers, including Deputy Dickey’s father-in-law, Chief Deputy of Gilmer County, were accompanying Deputy Dickey during the stand-off and they were responsible for apprehending the suspect.

Deputy Dickey had served with Gilmer County Sheriff’s Office for four years. He was survived by his wife and 9-month-old son.

Deputy Brett Dickey, Badge 508, has been noted in the past by Sheriff Stacy Nicholson saying, “He was not just any old police officer, he was a true public servant, and he was good guy.”