Being a member of the Gilmer High School Band requires effort, lots of it. From long practices in the sun with July heat for Band Camp to carrying up to a 20 or 30-pound sousaphone across 80 yards of open football field while wearing a uniform, this program can be physically taxing.

Or perhaps you are in Color Guard or Winterguard, performing maneuvers with a flag, rifle, or sabre while enhancing the show through dance, practicing in the same heat, but performing the taxing dance moves instead of carrying an instrument.

According to estimates and planning from GHS Head Band Director David Wiebers, the average student from Band Camp in July to the end of school in May, spends an average of 580 minutes, or just over nine-and-a-half hours, weekly on the program through class, camp, practice, and whatever else is needed.

Achieving as much as the Gilmer High School Band has achieved over the years is not easy, taking time, practice, effort, and no small amount of talent.

And that’s in a regular season. 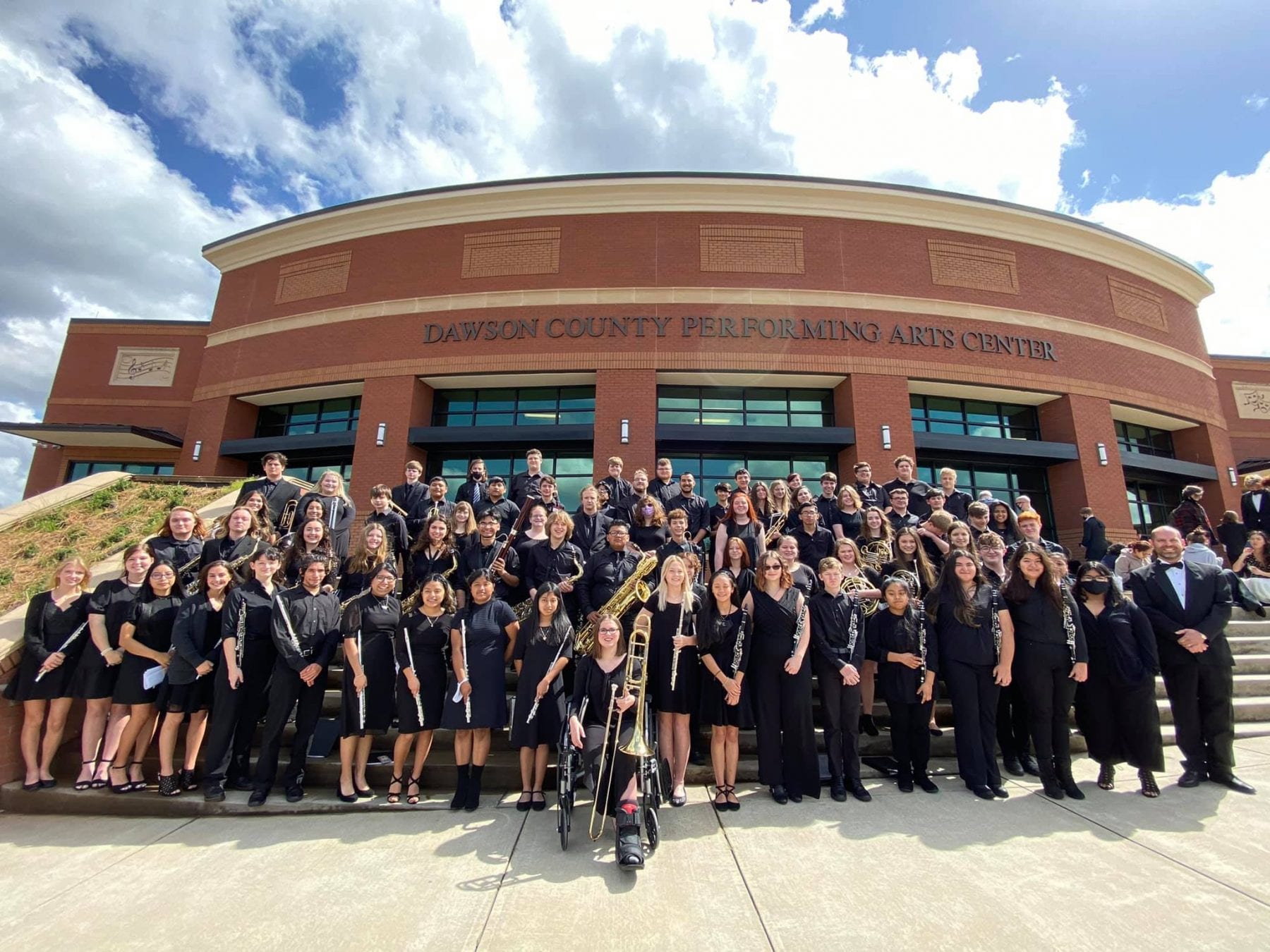 Amid COVID, the Band has functioned very differently, operating the similar hours of practice, striving just as hard for excellence and “Superior” ratings at competitions and shows. Consistant Superior ratings are even harder, like the superior rating the symphonic band received just last week at Dawson County High School for Large Group Performance Evaluation through the Georgia Music Educators Association.

The band program, in all of its forms, has changed because of the virus. While the schools allow and conduct virtual learning in classes, Band has to work a little different. Individuals train, but a band has to operate and perform as one. It takes dedication from students who attend after school practices, Band Camp, performances. Things you cannot do from home.

Each student putting in the same or more effort as they always have, but for fewer performances, fewer chances to get that perfect show, fewer chances to shine for judges and audiences. Both Band Booster Vice President Christy Prisco made note of this being a devastating blow to band members as they have gone from a normal year averaging between 40 to 50 performances a year overall between football nights, parades, symphonic concerts, jazz band performances, and other shows.

This year, that number was 17. A total of 17 performances divided between the entire program. Only 17 chances to showcase the effort that students put into their music.

“That’s the number one thing that we’ve been affected by, is the morale and motivation of our kids… Getting kids to buy in and work hard towards something knowing that they could potentially not be performing it… it’s frustrating for the kids.” said Wiebers. 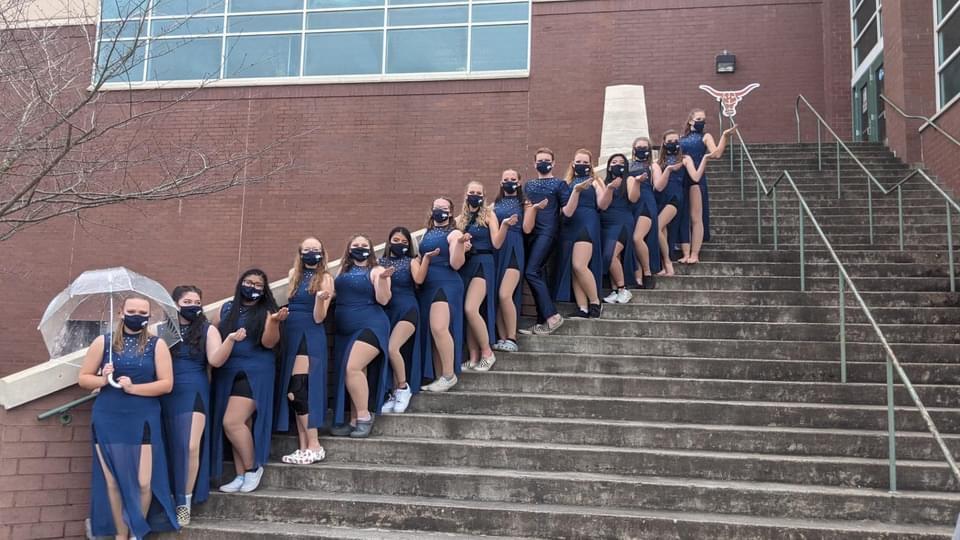 Fewer performances on the field for half-time shows is only on point as the school has had to cancel pep-band for basketball games. They have cancelled performances for the jazz band and symphonic band like annual showings at the Festival of Trees during Christmas. They have cancelled the band’s annual trip to perform elsewhere, in other states for other people, seeing a small part of the world.

Unfortunately, for a performance based program like band, less shows means less exposure. Less exposure means less fundraisers, Less fundraisers means less support. Less support means increasing costs and increasing difficulty in nearly every facet of a program that has seen success after success over its storied history. Due to Covid-19, the program has lost key successful fundraisers, such as their most important event with Apple Festival Parking but also events like Monthly Spirit Night and this year’s Annual Gala and Silent Auction.

On top of these issues, the situations have forced the band to increase its annual price per student for membership. The increase in annual fees is going from $225 to $325. Wiebers said the need comes as the band program really wants to maintain the greatest instructors and maintaining the essential building blocks for success.

However, Director Wiebers offered hope and a welcome to all students who want to be a part of the program, despite the increase in membership fees and funding amid the virus. He said, ” Do not let money be the reason your kid does not do band… Money is no thing, we will get your kid involved, one hundred percent, in this band.”

While the need is clear, the Director stressed the issue again as he asserted a desire to get more kids involved. He said, “The most important thing is that we want your kid in the band program and having a great time. We want to teach your kid, that’s what we want.”

It’s programs like the Gilmer High School Band that take a young man from Middle School back in the days when former Band Director Joe Pflueger then taught in the Middle School and Steve Calhoun was Band Director. That program took that young man to college for a degree in Music Education who then took his years of experience in performance into DCI (Drum Corps International) marching for Spirit Drum and Bugle Corps and then on to several years of the same excellence in a program to other counties in the state where he taught music.

But since COVID, it is harder for the program. Harder for students, harder to fundraise, harder to continue the history of excellence.

Harder, but not impossible.

Wiebers stated, “Gilmer Schools has done the best job possible during this pandemic as far as making things as normal as possible.”

The Board of Education funds part of the band as they always have. Through the budget each year, there is funding made available. Filling the gap between funding and need comes through the efforts of the Band Boosters and creative answers to the ongoing issue with the virus and new requirements for the program. Band Boosters have brought about change in the way they fundraise. New ideas like the band’s GoFundMe make small headway in the goal for the remainder of this school year, the summer, and fall marching season. Prisco was part of the group who launched the GoFundMe saying, “There are many costs that come with running a successful award winning program from staff, to props, flags, costumes and instruments.”

With stretch goals like personal thank you videos from the band, its sectional and overall leaders, and videos updating behind the scenes of what each ensemble is working on, the program holds an overall goal of $20,000.

But $20,000 itself is only a portion of the estimated total for the next year. With a normal year of fundraising, the boosters program collects closer to $150,000 for the whole year. While the number of students in each year can change total costs, the boosters are still seeking more options to achieve more for the students. That’s why other programs like an auction or the band selling show shirts and gear from current and former shows are another new answer to the need.

According to Prisco, some things like paying the royalties to be able to play certain songs for the shows, instructors for sections, and instruments are just a few of the key things that the bad starts with before adding on much of the extras in support of the program.

Funding is not the only changes what the GHS Band and Director Wiebers has instituted. Adapting to the challenge is a part of the process, as he says he still looks to include, work with, and improve students who may have needed to quarantine for a time.

Solo practice sessions at home will cover the same music that the band is working on together. This ties in with a new program, called Smart Music, that listens to students play and offers feedback on missed notes or other key areas before allowing them to repeat the practice until the student is happy with it and submits a final playthrough for Wiebers to then listen to and continue from there.

Additionally, while very few may have noticed, this years half-time show for the Marching Band included social distancing practices and a drill that kept every single student at least six feet from anyone else at every moment of the show. A specific drill created wholly in response to the COVID virus.

With numbers decreasing, Wiebers has said it’s gotten easier as less and less students are out or quarantining.

Unfortunately there is no answer yet for the drop in shows. While the program’s stellar new Winterguard has seen successes in its formative years, it suffers from cancelled competitions and reduced showings the same as all of the ensembles throughout the year. 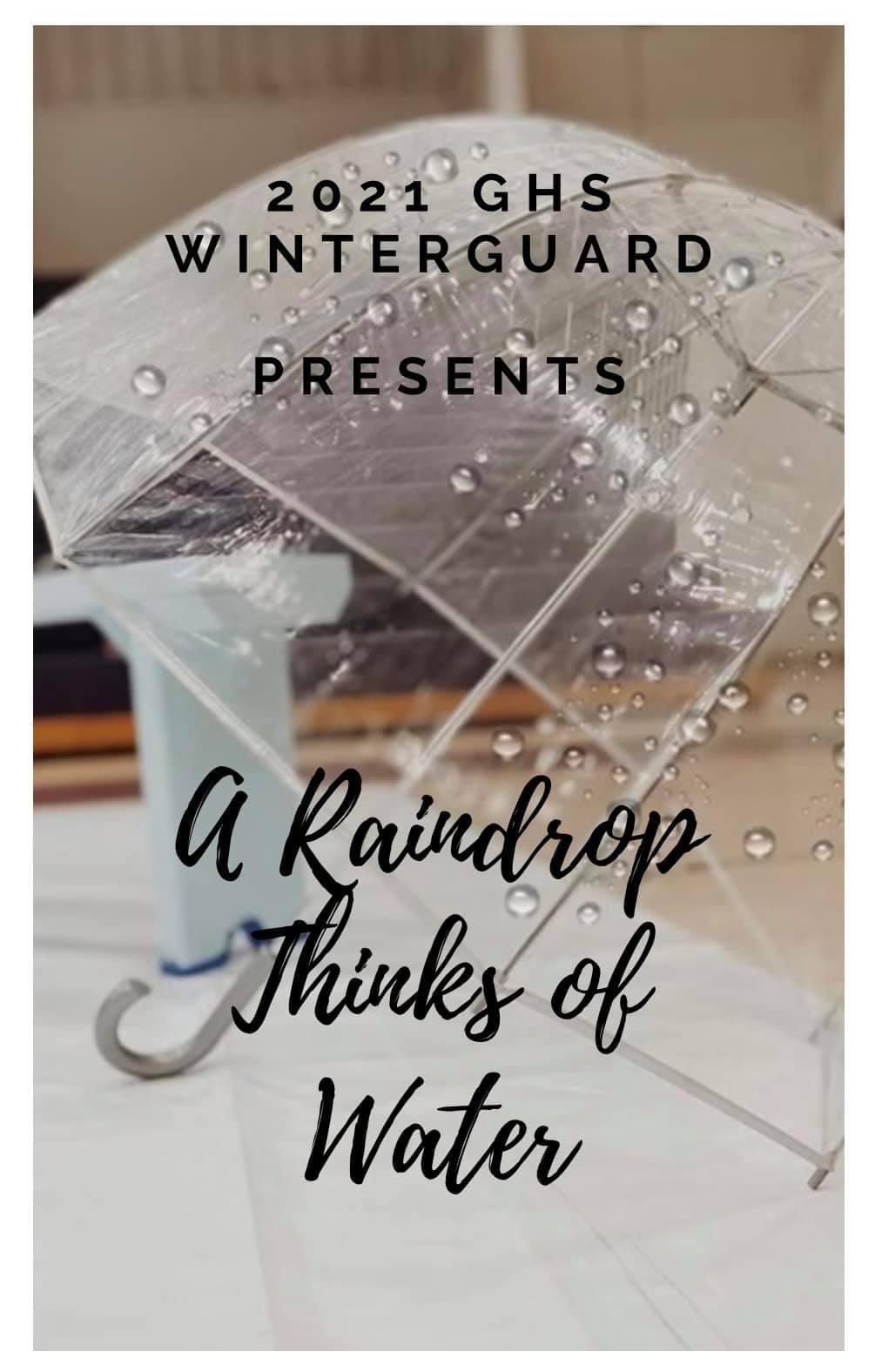 That hasn’t stopped students from maintaining the quality, motivation, and spirit of the music, obtaining Superior ratings and continue to perform stellar shows for the community.

The Winterguard has one more competition this year on March 27, 2021, at the Buford Arena. The Band still has its silent auction fundraiser on May 6 at 6 p.m., the same time as their Spring Concert on Pflueger Field behind Gilmer High School offering a picnic style setting.

Much attention has been brought to artist and musicians over the years through “save the music” events as funding has dwindled. But now, a new challenge comes during a virus that seems to be doing as much damage socially as it does to an individual person.

Roy Ayers once said, “The true beauty of music is that it connects people. It carries a message, and we, the musicians, are the messengers.”

In today’s world, with everything so socially distanced, a musical connection among people can be one lifeline back to normal. And the path may come through the hard work and sweat of students to make that music. But it takes a community willing to listen to the music and support it to allow it to thrive.