GILMER COUNTY, Ga. – With election day for the primaries less than two weeks away, Georgia Governor Brian Kemp visited Ellijay to speak to supporters about the election and his campaign as the incumbent. Kemp visited BJ Reece Apple Orchard on May 12, 2022.

Kemps stated that his campaign is a fight for the soul of Georgia. His daily mission on the campaign is to “make sure Stacey Abrams is not our governor or our next president.”

Local members of Gilmer’s government were on hand to listen to the governor speak including Sheriff Nicholson, Probate Judge Scott Chastain, Post Commissioner Hubert Parker,  BOC Candidate John Marshall, and many others. Many noted that they were anxious to listen to the Governor and hear what he had to say while not offering opinions for or against but John Reece of BJ Reece Orchards firmly stated his support for Kemp saying, “I’m thankful he ain’t closed churches, he’s not closed schools down, and he’s not closed our businesses down.” This, according to Reece, was the difference between paying your bills and not paying them. 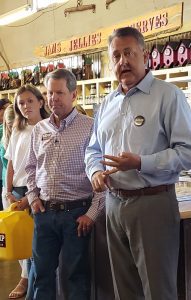 Georgia State Senator Steve Gooch, right, introduces Governor Brian Kemp, left, as he speaks at BJ Reece Orchards on May 12, 2022, about his campaign for reelection.

Others also offered support for Kemp and his campaign like Kent Sanford who stated, “I like Governor Kemp because he’s got a proven record. His handling of the pandemic along with Speaker Ralston and other state leadership made a real difference for Georgia. You’ve got to recognize that and give the man credit for what he did.”

Kemp spoke about the state’s progress over recent years through major events like the pandemic and his support of businesses and people’s freedoms to make their own choices in the crisis. He pushed back against chastisements from political opponents like Abrams as Kemp said she criticized Georgia’s response as “too fast and too early.”

Kemp compared Georgia to other states saying where some told citizens it was okay to go gambling in a casino, but not to go to church on Sunday. Church is something Kemp said will never be shut down in Georgia as long as he is Governor.

He also noted how much he didn’t get to weigh in on due to the pandemic, such as elections. Kemp talked about Senate Bill 202 and its efforts to increase security between voter ids, rules against out of state money, ballot drop boxes, and increasing opportunities to vote in early voting. 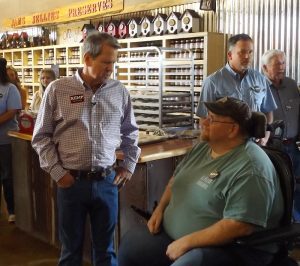 Kemp spoke with citizens before his stump speech about issues and voting in both the primary and main elections this year.

In addition to the struggles and protections, Kemp spoke about what he called Georgia’s successes in economy and government. Kemp said that Georgia’s economy left extra money in the budget that he said he wants to send your money back to you instead of making up new projects.

He spoke on legislation passed for constitutional carry and Georgia’s record for the lowest unemployment in years. He also noted a temporary suspension of gas tax to help citizens “fight a 40-year high Biden inflation.”

He spoke about his future plans as well, including looking at military retirees tax cut and continue supporting teachers through projects like increasing teacher pay. He wants to continue progress on education protections like recent legislation against classroom indoctrination, a term many use for critical race theory. Kemp stated, “We want them taught the truth, not somebody’s ideology. That’s the way it should be in our state. That’s the way it’s going to be.” 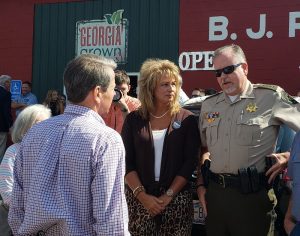 The pandemic was on a lot of minds at the event both before and after as many supporters noted Georgia’s path through the crisis as part of their reasons for supporting Kemp. Penelope Marshall said, “What I appreciated most was the honesty and how much he really thinks about the people of Georgia.”

Stacey Fields said, “I fully support him. I voted for him before, I’ll vote for him again… I have two children, one is in law enforcement and one is a teacher. He’s supported both fields.”

Kemp noted that he is focused on continuing work for Georgia and returning to the office of Governor. He spoke about the democrats and the struggle against democrats like Abrams, but also noted that the here and now is a primary and the first step to re-election. Only one week of early voting remains before the primary election day takes place May 24, 2022.