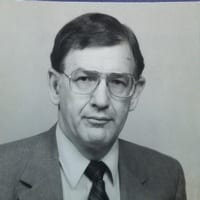 Born on April 25, 1932 in Evansville, Indiana to the late Frank Paul, Sr. and Beulah Yeiser Paul, Ed served in the US Air Force during the Korean War as a navigator in Japan and the Far East until receiving an honorable discharge in 1956. He graduated from Purdue University in 1960 with a degree in Electrical Engineering and worked as an engineering manager in the aerospace and aeronautical field with Harris Corporation in Palm Bay, Florida.  He retired from Computer Sciences Raytheon in Cocoa Beach, Florida in 1997 where he enjoyed working as a member of the NASA Space Shuttle program.   He was a member of First United Methodist Church of Ellijay.

In addition to his parents, he is preceded in death by his brother Frank Paul, Jr.

A Celebration of Life will be held at Inman Park United Methodist Church in Atlanta, GA on July 8th at 2:00. Graveside services will be held on July 9th at 10:30 at Georgia National Cemetery in Canton, GA. Officiant will be Rev. Dr. Tara Paul.