ELLIJAY, Ga. – With almost 2,000 people responding to their ESPLOST Survey, the Gilmer County Board of Education released the results at their June Meeting. 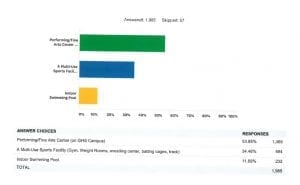 Though seen as a somewhat surprising result according to Gilmer County Charter School Superintendent Dr. Shanna Downs, she encouraged the Board to bear the survey’s results in mind as the moved forward with preparations for the ESPLOST referendum. While it is likely this vote will be seen as early as this November on the ballot, the ESPLOST cycle would not take effect until 2020. With the five-year cycles, the Board is attempting to plan several years ahead as they or only now at the midpoint of the current cycle.

While this may seem far off, officials say it is imperative to begin preparations now so that the voting, investigations, and preparations are in place when the 2020 cycle begins to move forward with the work as quickly as possible.

This does mean, however, that as the Board contemplates their survey, if they move forward with the Performing Arts center included as it seems they will, there are currently no plans setting when they will begin the project within the five-year cycle.

The project would stand next to others like the construction of a new Elementary School at the Board’s Clear Creek Property to replace the aging Ellijay Primary School currently in town on McCutchen Street.

Check out the Survey Results for the full tally and comments.