ELLIJAY, GA. – Mountain View Elementary was specially noted during the Board of Education’s November Meeting for its 14.4 point jump, from 70.1 in 2017 to 84.5 in 2018, in CCRPI (College and Career Ready Performance Index) as Georgia has officially released the Milestones testing scores. 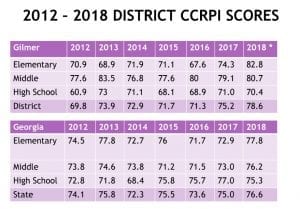 Despite another change to how Milestones Testing is scored, the Gilmer School System has again put up above average scores compared to the our district. In fact, Both Elementary and Middle school scores placed in the top four counties in the North Georgia RESA and Pioneer RESA, our regions of comparison. Only the High School’s scores came in below average. The county’s high school scores placed in the bottom four schools in the region. 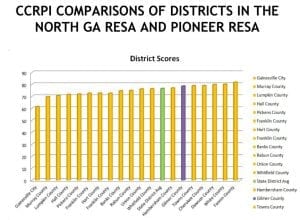 During the meeting, Board Member Ronald Watkins asked what the school system was doing to answer the lower high school scores compared to the other schools. Mitchell noted the progress the high school scores have made from 2015’s score of 68.1 and 2016 of 68.9 to last year’s 71.0 and this year’s 70.4. With evidence of the scores improvement, she also noted that the milestones scores have indicated areas where the school system can improve and continue increasing the scores.

Another change brought by this year’s Milestones redesign was scoring and testing for Ellijay Primary School. Mitchell noted that in recent years, the EPS scores in the 30’s were skewed by heavy focus on one or two classes and were not an accurate reflection of those grade levels. This year’s redesign puts EPS closer to the school system’s average by skyrocketing the average from last year’s 33.8 to this year’s 65. 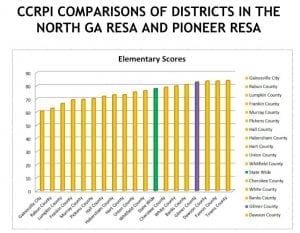 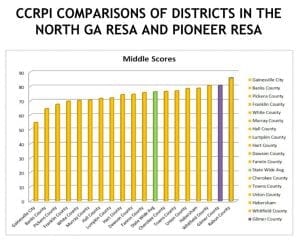 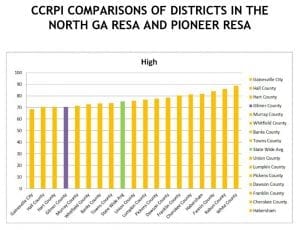