Collins attended the meeting alongside Georgia State Senator Steve Gooch (R) and spoke to citizens about the party and the coming elections. 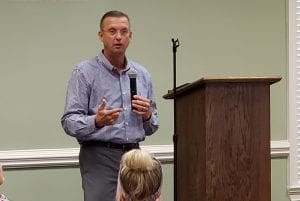 Representative of the 9th District of Georgia, U.S. Congressman Doug Collins speaks to citizens during the GIlmer GOP Breakfast Series on August 23, 2019.

“I am tired of conservatives being boring,” said Collins during his speech. Rallying citizens to be people of action, Collins said he wants republicans who get excited and get others to be excited about the issues they face. He noted several issues the democrats have already gotten a head start on and asked why republicans don’t have similar activities.

One of the examples, Collins asked how many people local republicans have gotten registered to vote saying that the states need more republican turnout in the elections. He went on to highlight another response to democrat fundraising in the site known as ActBlue. Collins said that the Republican’s own WinRed is the next step in connecting every republican with the capability and choice in donating to political campaigns.

Collins continued pushing for more energy, excitement, and action from republicans to support the real needs of the area. He offered a story about a business owner who had recently purchased a metal press to expand his business. Collins said that the owner was able to purchase it with a new tax bill from the state. Collins said,

I was talking to the business owner and he came up to me and said, “I want to thank you for the tax bill because you see this piece of equipment right here… I was able to buy that this year because you allowed me to depreciate it the same year so it helped me to actually buy this piece of equipment.” But then he didn’t stop, he said, “But do you know why I bought that machine?”

It’s about three people, Jim, [Susie], and Bob. It’s time that we take back. Conservatives, don’t be ashamed to say that we are for people and they are not.

Wrapping up the event, Collins took time to speak with citizens and answer questions. The Gilmer GOP offered Collins a gift for speaking. They gave him a metal art called “The Pledge Flag,” created by Gilmer artist Damon Gabrel. 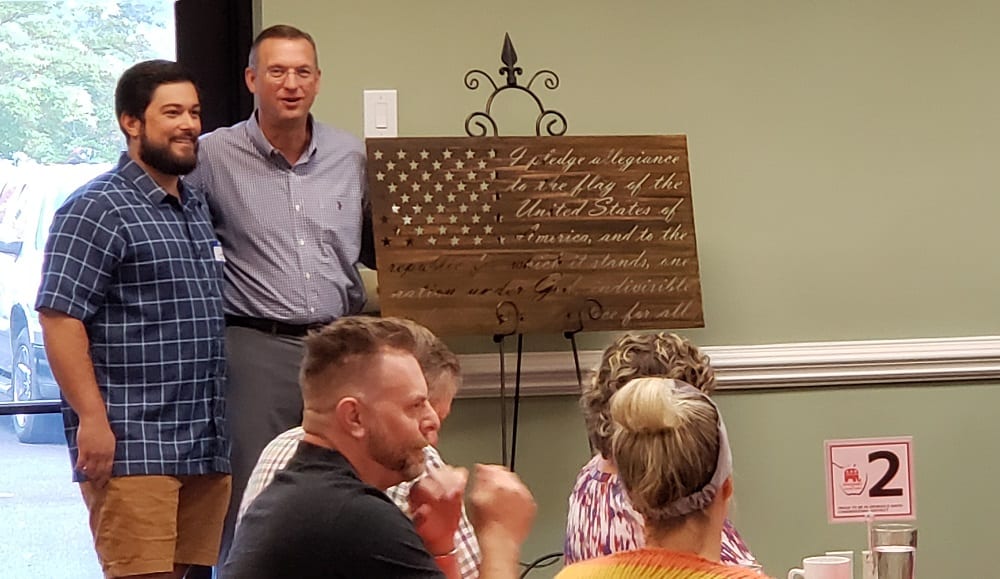 Local artist Damon Gabriel, left, stands with U.S. Congressman Doug Collins, right, and the special gift called “The Pledge Flag” a piece of art given to the congressmen for his speech at the Gilmer GOP Breakfast Series.