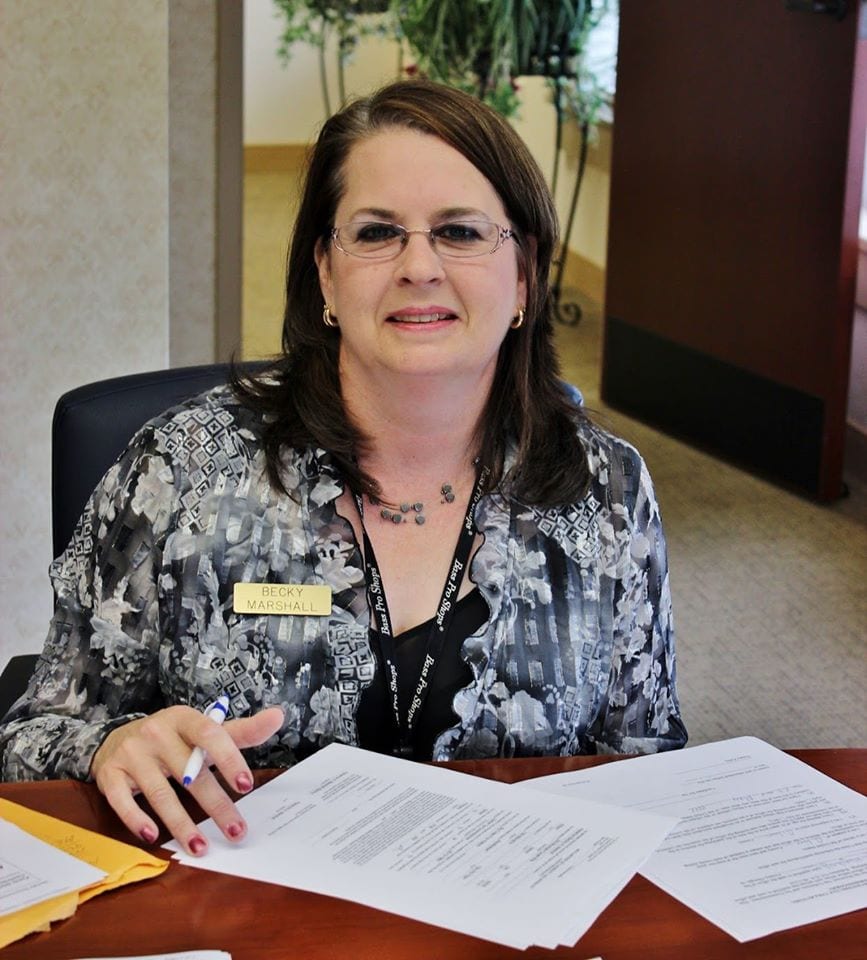 Though being elected for two terms and having almost eight years of experience in the position, Becky Marshall has been in the office of the Tax Commissioner for 16 years.

Married to Danny Marshall with two daughters and five grandchildren, Rebecca “Becky” Marshall has lived in Gilmer County for just under 24 years.

“I feel like I have made a big improvement to the Tax Commissioners office. I feel like I have worked well with the citizens of Gilmer County. I love what I do. I am passionate about what I do. And I want to continue to be available for all the taxpayers if they need me,” says Marshall.

Marshall offered a few of the accomplishments made over the years, but as she listed them, she noted that ‘we’ have done things. She said, “We have gotten the delinquencies caught up. We have been maintaining almost a 99 percent collection rate with all the tax bills… We have cross-trained all staff members so all staff members work in the motor vehicle division and in the property tax division.”

Even in the current crisis, simple measures like adding a dropbox outside have made improvements for citizens wishing to maintain little to no contact. Marshall added that past improvements have helped as well like putting services online and allowing citizens to pay bills and attend to things that way have allowed people to stay home. She noted that even those coming in have needed adaptation as she has even said some have phoned and the office has offered curbside service to them.

Marshall said that the office needs to be flexible in these times saying, “It’s going to be a struggle for a lot of people. So, we want to be firm and we want to be strong, but we also want to be compassionate and understanding.”

Even now, Marshall says she wants to keep improving the office, growing with the times. Even though she says that she, personally, isn’t the best at upgrading and using social media, she wants the office to be better in that regard and has been working towards expansions into these realms for some time.

Reaching out is the next step, says Marshall. While some older generations may not use or need the digital upgrades, reaching out to younger generations and incorporating the citizens’ wants and interactions is a part of that step. She said she has considered options like self-service kiosks and convenience for people who work full-time, more open information through social media, and website improvements.

Even cooperations with other departments is improving as she states that the courts, the clerk’s office, the tax assessors office, all of these departments are crucial and communication and cooperation with them are just as crucial.

Marshall says she still has plans for the future, plans to continue improving the office past what they have already achieved. Yet, it isn’t progressing for progress’ sake that drives her. It’s the balancing and bottom lines that provide a sense of correctness and positive energy for her. Maintaining excellence is the force behind her. Continuing the effort and the payoff of her efforts for the office was why she ran eight years ago, and it is why, she says, she is running again this year.

She said, “The office belongs to Gilmer County, it doesn’t belong to me. My paycheck comes from the taxpayers. I want this office to run the way they expect it to run. I want the transparency, I want people to be able to see exactly what’s going on. There is always room for improvement. No matter what you’re doing…”