ELLIJAY, Ga. – With the county’s April meetings coming this week, discussion and debate is continuing as the Land Use Ordinance change is in its Ninth Version for the county. The Board of Commissioners keep revisiting the document with new changes as citizens continue debating and questioning certain aspects of the changes.

Most recently, debates over 60-feet Right of Ways have come under scrutiny. Yet, the discussion has ranged from lot sizes to road quality to types of animals in hobby livestock.

Gilmer County has discussed each topic at length before having County Attorney David Clerk revise the ordinance. Now of Version Nine, the document still has not reached a formal First Reader. Over several meetings, the board has indicated the sentiment as Chairman Charlie Paris stated on different occasions that he wanted to get it right rather than get it done fast. 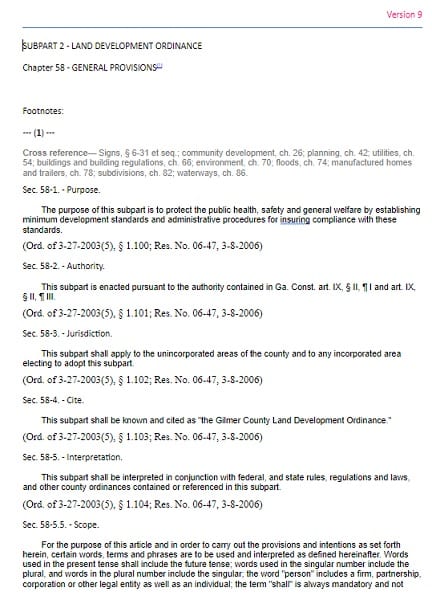 It is a sentiment shared by citizens and department Heads like Jim Smith, Director of Public Works, who have been along the discussion in every meeting.

Much of the support for continuing to adjust and modify the document came in their most recent meeting as discussions of the ’60 feet’ of Right of Way centered on the future and future needs to lay cable or pipe in the areas alongside the road. Because of that, the ordinance maintains a way for the Commissioners to classify and require different standards for larger developments.

Discussions have also included individual residential homes in addition to larger developments, from lot size to hobby livestock, the county is revisiting the topics of residential areas. They have also discussed driveways and slopes as Public Safety becomes involved in emergencies. Many homes farther from the city can get quite steep in their driveways, especially on the mountainsides and in difficult terrain where homes have to access a public road however they can.

Standardizations of driveway slopes, specifically, centered on public access and the county’s ability to respond rather than on personal use. Details focused on ambulances and fire-trucks.

Road work follows along as well as many citizens are pushing for the county to expand its paved roads system, both February and March saw roads added to the road paving list. However, this list includes all roads in the county in need of paving or re-paving, not just adding unpaved roads. Any road that is to be considered for paving must first be on the road paving list.

Adding new roads through paving dirt roads or developments in areas must follow these new changes and requirements, with allowances for adjustments on larger developments, once the ordinance change has been voted on.

In preparation of this weeks meetings, over 200 pages (the full document) of the Ninth Version of the Land Development Ordinance are available for public viewing. The county has noted intents to advertise the changes which could mean a First Reader could come in May. However, should more changes be requested from citizens or developers, the ordinance could be further delayed as it has in the past.