ELLIJAY, Ga. – Gilmer High School’s graduation ceremony has been delayed in the face of weather forecasts. According to school administration, at the time of the decision, forecasts indicated an 80 percent chance of rain.

Due to this, Gilmer Schools originally followed previous plans to move the ceremony inside, keeping the date and time in order to avoid upsetting any plans for families who may be traveling. However, overwhelming response indicated that the majority of families did not want to move it inside.

Superintendent Dr. Shanna Downs told FYN that the school system polled students for the option of moving the ceremony to the following morning in order to allow their wishes to stay on the field but also avoid the rain. With virtually complete support for the idea, the school system announced today that Gilmer’s Graduation Ceremony will move from Friday night at 7 p.m. to Saturday morning at 10 a.m. 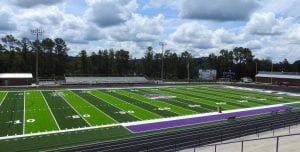 While avoiding the possible rain, despite the forecast continuing to change, the change in date has also forced another change to the ceremony.

As reported in March, the resignation of Superintendent Downs effectively set her last day as May 28, 2021, in order to allow Dr. Downs to perform her final action in recommending the class for graduation and joining in the delivery of diplomas. The legal motion within the meeting accepted her resignation with this final day.

Now, with the official date of the ceremony moved to May 29, and with former plans to move into her new home already in motion, Dr. Downs said that she deeply regrets that she will not be able to be a part of the proceedings anymore. She confirmed with FYN that Interim Superintendent Kim Cagle will now perform the necessary actions.

Downs said the she will start her new job early next week, but wanted, and planned, to finish her time with Gilmer Schools with the final moments of ceremony and acceptance of this year’s graduating class.

Much of the plans for the ceremony remain as stated including parking and processions. The system is simply changing the time and day.