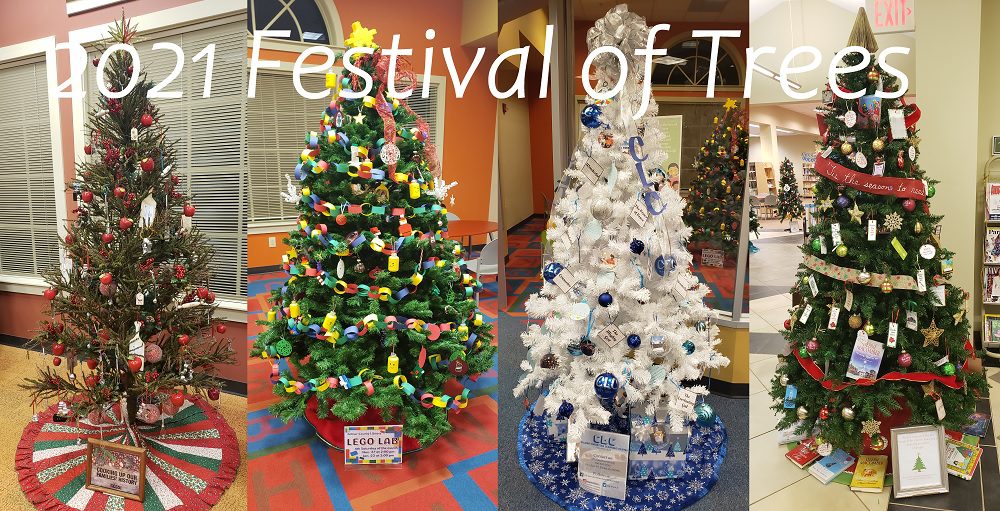 ELLIJAY, Ga. – An annual event, the Festival of Trees that Gilmer’s Library hosts during December showcases tress from local businesses, organizations, and entities. Each year hosts the celebration to kick off the season and has become an essential part of Gilmer’s Christmas Traditions. 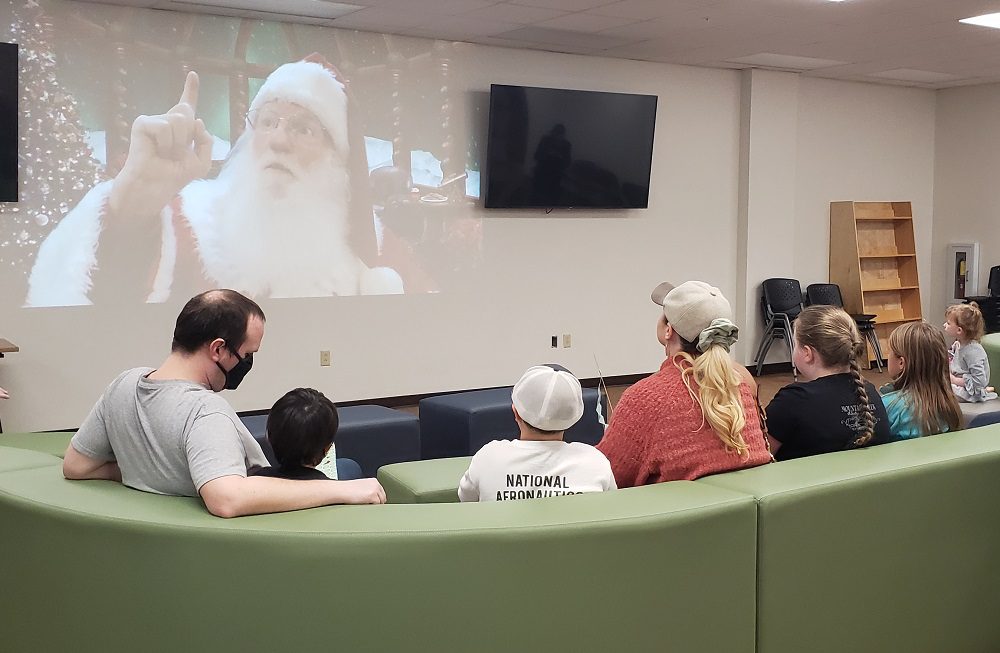 Sitting on the couch, kids and parents listen as Santa Claus reads “The Night Before Christmas” in a special video for the Festival of Trees.

A well anticipated event, the commissioners discussed the Christmas celebration briefly with representatives of the library as early as October during the budget meetings. With December finally here, the library has 23 trees standing in the building from across the county.

The Festival lasts through December and citizens can visit the Calvin Jackson Drive location just off of Highway 282 during normal operation hours of the library, but December 1, 2021, saw the open house event hosting games, ornament crafting, and other Christmas events during the night.

Children present were treated to videos from Santa Claus throughout the night as he read The Night Before Christmas and special messages. 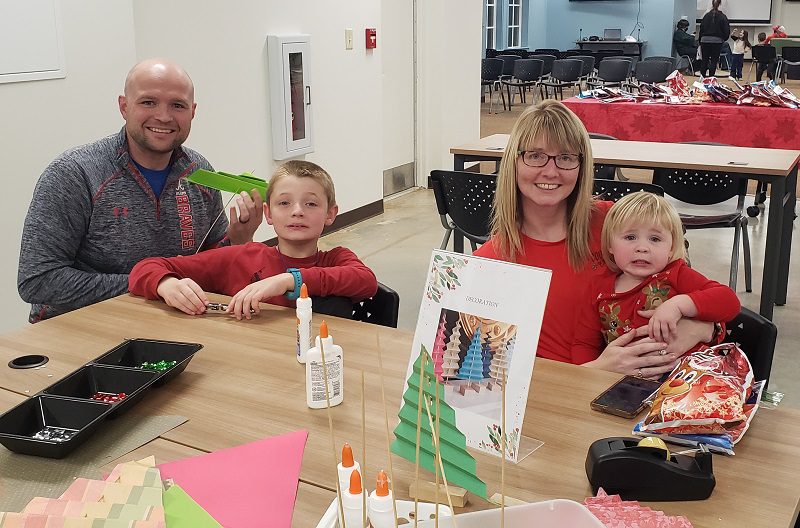 Hosting families from Gilmer County, the Library’s ornament crafting stations involved the whole family gathering at a number of tables during the Open House.

Additionally, a special guest showed up for the night. Calder, Gilmer Public Safety’s Crisis Response Therapy Dog, spent the night saying hello and receiving some petting from kids and adults alike. Not just a part of Public Safety, Calder is a charter member of the ACES Crisis Response Therapy  Dog Team. He is currently in training for search, rescue, and recovery with Emergency K-9  Operation, Inc. Search and Rescue. Even he wasn’t a super dog for being able to search for and then both physically rescue and emotionally calm people, he is extending his reach even further participating in educational and reading programs. 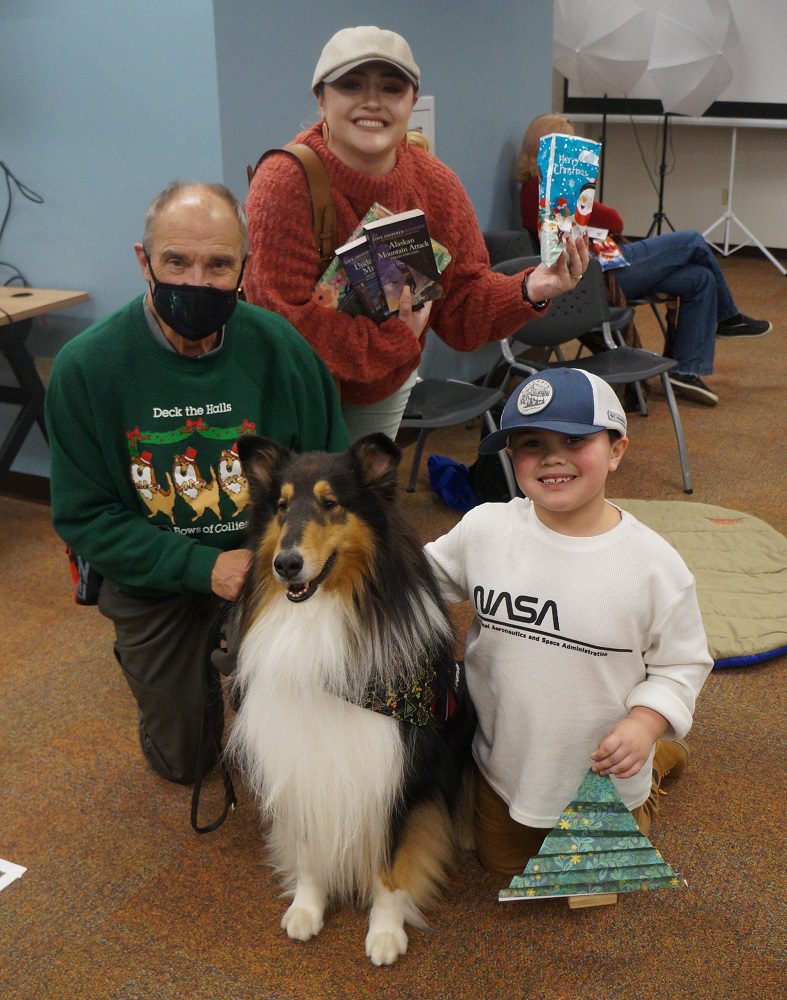 Taking a moment to post with his handler and a visiting vamily, Caldera, a emotional therapy dog with Gilmer Public Safety, visited the Open House of the Gilmer Library’s 2021 Festival of Trees.

All this combines to make Calder specially capable of working with anyone facing emotional, mental, or physical challenges.

Some of the reading programs, as his handler explained, involve him simply sitting and listening to children read to him, others are more advanced, and his emotional training helps him with people in dangerous situations or just having trouble with reading aloud.

Calder traveled both upstairs and downstairs during the open house to visit all sections of the celebrations as the Festival of Trees is solely on the main floor. Each tree hosts its own theme and group. From the toolbox ornaments adorning the Lowe’s tree to the songbirds all resting on the branches of the Garden Club of Ellijay’s tree to the messages and photos in ornaments of the CLC’s (Christian Learning Center) tree, each and every tree has little things to notice and find and enjoy.

The Gilmer Animal Shelter tree, an entire “Nightmare Before Christmas” theme sees Jack Skellington’s own dog Zero atop the tree, but look closer and follow a certain orange and black ornamental wrap and you’ll notice a familiar snake from the movie munching on presents.

Made by the Gilmer Animal Shelter, this “Nightmare Before Christmas” themed tree was entirely made from collectibles and handmade ornaments from Shelter employees.

Animal Shelter Director Daniel Laukka, who attended the event to support the efforts of library he said, told FYN that his tree specifically had another hidden detail that many couldn’t know or notice. Laukka said every single ornament on the tree either came from the private collection of one of the shelter’s workers or was hand crafted by shelter employees.

Make sure to see all of the trees in FYN’s Gilmer Festival of Trees photos on Facebook. 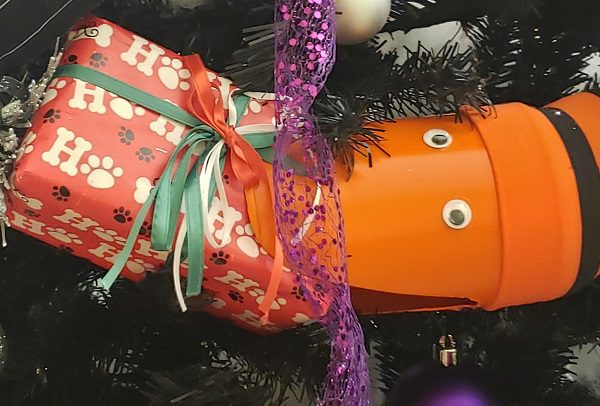