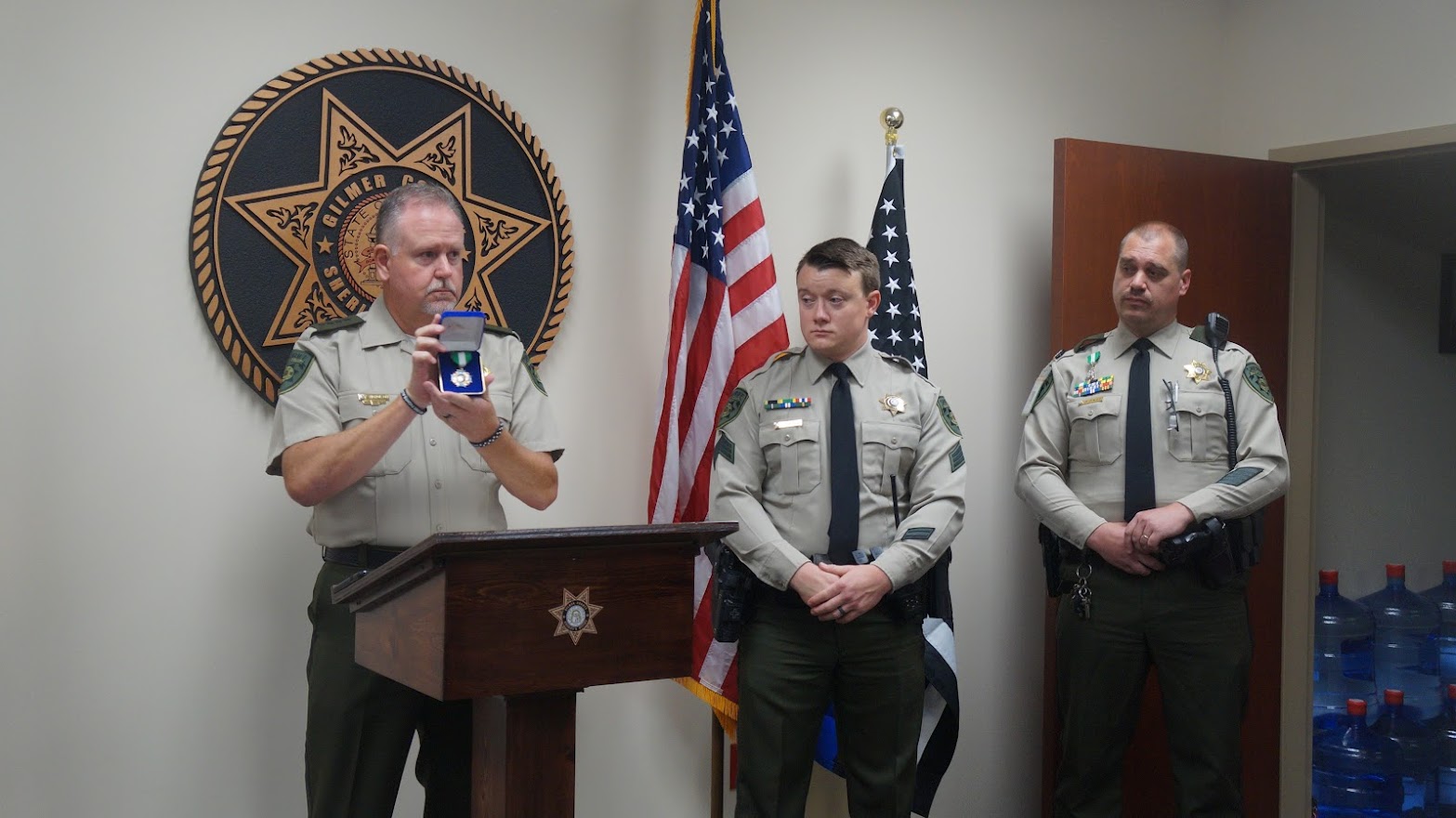 GILMER COUNTY, Ga. – On August 31, 2022, at about 3:30 p.m., two Sheriff’s Officers responded to a 911 call, Lieutenant Mark Patrick and Sergeant Josh Perigo were the responding officers to the 911 caller who said they had received a text message from a friend that read, “I’m smoking my last cigarette, I’ll be brain dead by the time you see this.” 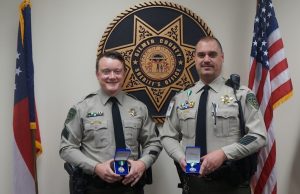 Sergeant Josh Perigo, left, and Lieutenant Mark Patrick, right, received the Life Saving Award and the Georgia Medal of Merit for their actions in saving a life on August 31, 2022.

According to Gilmer Sheriff Stacy Nicholson, these officers went far above and beyond their duty on that response. Many times, officers respond to a call, do their job, and move on to the next call. Nicholson said that many times, officers never know the full extent of what their efforts accomplish or the final outcome of a situation.

Written by Sheriff Nicholson in a letter nominating these two for Lifesaving Medal awards, the account of the response stated,

Perigo and Patrick both rushed up the steps of the residence and discovered the front door was locked. Both Deputies then started walking around the residence trying to look through windows. It was at this time, Lieutenant Patrick retrieved a nearby ladder and was able to visually look through the kitchen window where he observed a male subject hanging from a rope in the kitchen/living room area. It was at this point, Sergeant Perigo and Lieutenant Patrick, using their asp batons and other nearby tools, made forced entry into the residence.

Upon gaining entry into the residence, Lieutenant Patrick and Sergeant Perigo cut the rope, in which the male subject was hanging, and began CPR until emergency services arrived on scene. The male subject, who started breathing on his own, was airlifted to a regional hospital for treatment.” 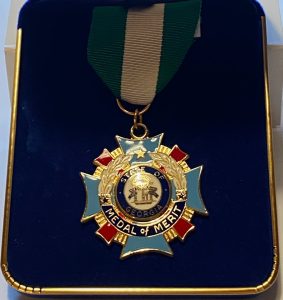 Sheriff Nicholson stressed several times how the officers on scene could have retreated and called in investigations for a suicide once the noticed a lifeless body hanging inside. This would have been protocol and they would be doing there job. Instead, these officers rushed in, applied their training, and saved a man’s life. Nicholson stated, “We provide the training and the knowledge, but we can’t provide the heart and the intuitiveness of ‘It’s time to do this.’ That comes in the hearts and brains of our deputies.”

Sgt. Perigo stated about the award, “I feel appreciated.” He went on to add that it is a traumatic situation to be in for everyone. He stated, “I know he was in a spot in his life where he thought he couldn’t go anywhere else. I’m glad that we could help him, just get him out of that situation. I feel the best result, that could have happened, happened. Obviously, I wish that we could have better services that we could provide for him before we get to this point. Before anybody ever gets to this point, I wish we could help them out beforehand.”

In applying the training and that moment’s decision, Lt. Patrick said just knowing there was a chance was all he needed and it is always worth it. He stated, “We knew the call was recent. We knew we had to act quick. It’s a judgment call. It was basically a do-it-now kind of thing… Just knowing the circumstances of the call, it was something that we knew that we might possibly have time to get in there and get to him.”

Both officers said that the award is meaningful in recognition and feeling appreciated for their efforts, but not something they were expecting. Yet, it will never be enough according to the mother of the victim who called both the officers her “heroes.” 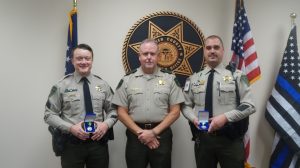 With tears, she spoke about how easy it would have been to just cut him down and end it there. Yet, she said that these officers worked on her son for ten minutes to get him breathing and his heart beating. She stated, “These deputies, I owe my life to because they brought part of my heart back to me and I get a second chance with my son because of them. So, do they deserve an award? Yes! What they got isn’t even close to the thanks they deserve. They deserve to be recognized. They deserve that title of hero because that is what they will be in my mind.”

Awards like this are double edged, as the Sheriff’s Office and the county take time to honor two officers, it also means a tragedy has occurred that required their actions. But the mother of the victim said, “The tragedy that lead up to this situation has reversed and become a miracle because, in all reality, my son should have never walked away from his home that day. In all honesty, he should have never been able to get up again. He spent two days with a tube down his throat. They expected him to take four before he removed it. In two days, it was gone. Three days, he was talking. Day four, he was eating and up walking.” She faltered in her speech as she added one final note, “Today… today my son is back home where he is supposed to be… and he is changed for the better for it.”

The medal is not a common award given as Sheriff Nicholson stated he has only awarded this medal three or four times since becoming Sheriff. With the clear and obvious life-saving efforts of these two officers, taking time to recognize them is something that the family, the office, and even the public feels is absolutely necessary as response has including many congratulations and a number of people sharing their own stories of the effects of situations like this and even how these two specific officers have helped them as well.

Sgt. Perigo stated, “Ultimately, our job is to protect life, even if that’s from yourself. We’re going to help you. We’re going to do everything we can to keep you alive and keep you safe, and even in the end get you the service that you need. We’re here to help and that’s what we want to do.” 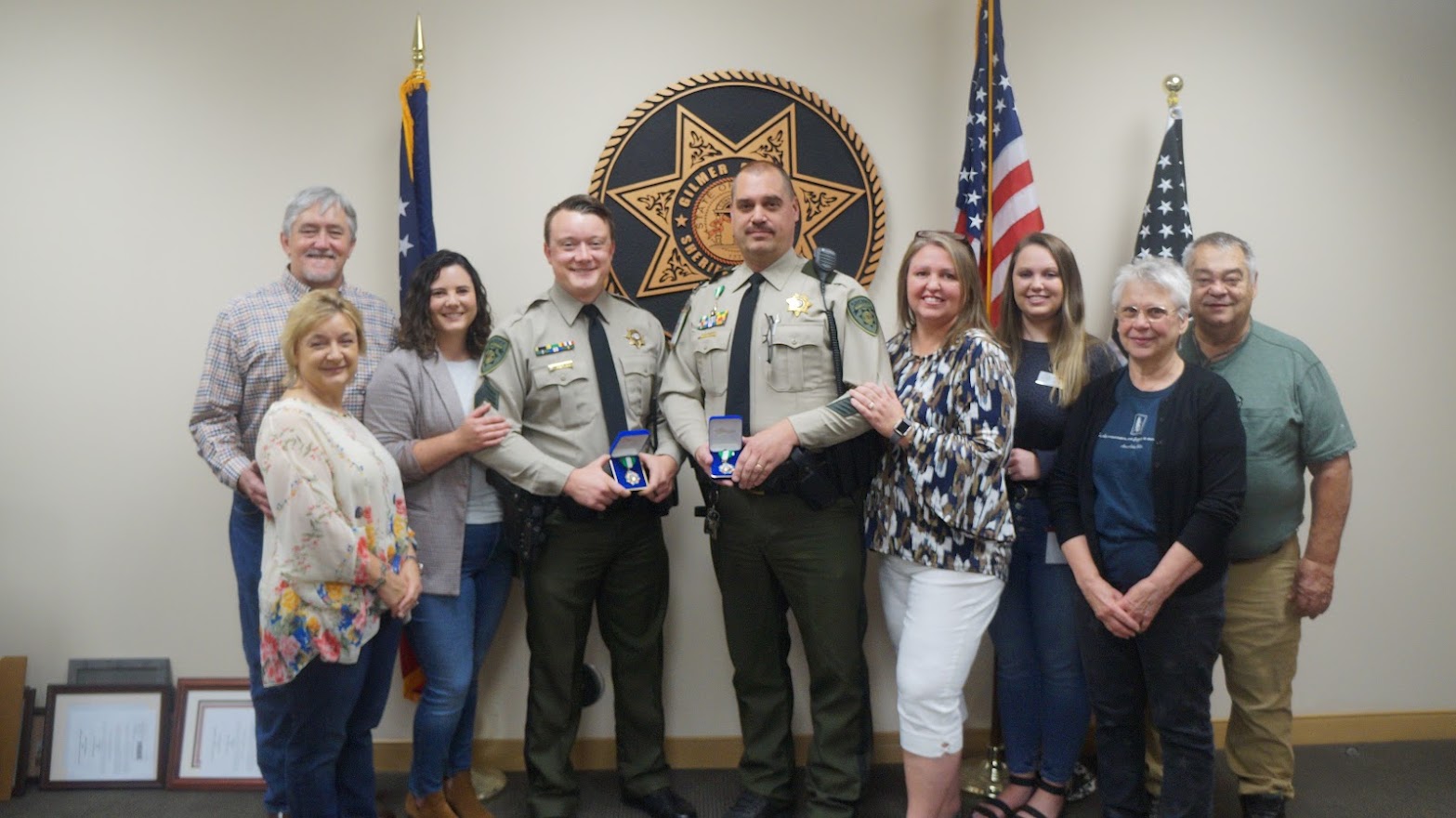