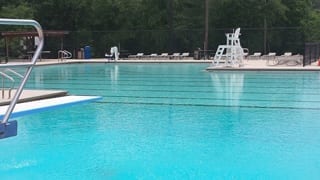 In both their Work Session and Regular Meeting, the Gilmer County Board of Commissioners heard plans from citizen Larry Lykins encompassing local organizations and the county to enter an agreement to allow the Community Pool to stay open through the Winter.

Though he said the project was a stop-gap as the community still wants to see a full facility someday, Lykins listed several benefits for winter pool use now, including the school’s swim teams and Parks and Rec uses that could even include community classes. However, to use the pool in winter months would require heating.

Lykins’ plan includes local organizations purchasing a “bubble” for the pool that would enclose a portion of the pool to allow heater systems to be purchased to heat the pool. As Post 1 Commissioner Dallas Miller countered with concerns about the county’s financial standing and purchasing the new equipment, Lykins said that the interested parties, one of which could be Three Rivers Athletic Club, would raise the funds for the equipment, leaving the county to only be responsible for operating expenses such as electricity, gas, and lifeguards.

Lykins offered a forecast for the project to operate under a “12 month-break even” plan for the county to offer the pool without a financial loss. The plan made inclusions for ideas such as Water Aerobics classes, Swim-Meets, Physical Therapy, and other options to be explored for use.

Gilmer High School Athletic Director Rodney Thurman also attended the work session to represent the School’s willingness to support the project as they could utilize the pool for swim meets, bringing parents and athletes from other counties to our community.

Additionally, this would also mean increased usage for citizens who want to use the pool in Winter Months to continue exercise or recreational use.

During their regular meeting, the Commissioners did vote to move forward with the proposal and collect the funds for the equipment. Though this is not a full agreement reached, citizens attending the meeting applauded the decision. As the interested parties gather, the Commissioners will continue monthly updates and observation of the process to control and monitor the operations to avoid a major financial loss, should the project not bring in the revenue to support itself.

Commission Chairman Charlie Paris asserted to Lykins and the citizens that this is a risk for the community, and if the community does not utilize the pool, the lack of revenue could force them to shut the project down.