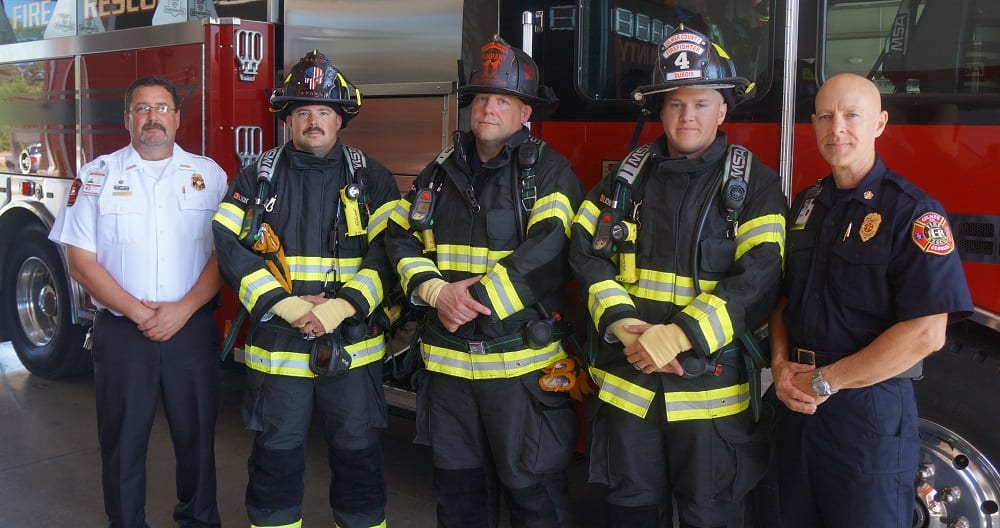 ELLIJAY, Ga. – Gilmer County’s Fire Department is finally seeing the fruition of over a year of planning, adjustments, and applications as they catalog the many upgrades to the fire department.

It’s not just the fire protection that has seen these improvements, however, as Public Safety Director Keith Kucera and Gilmer Fire Chief Daniel Kauffman showcased the new purchases. 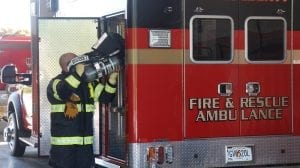 Carrying nearly 80 pounds in extra weight, Gilmer Firefighters rely on the gear for safety and protection in their daily service.

In a concerted effort, Kucera, Kauffman, and County Commission Chairman Charlie Paris all said they wanted the new uniforms to be a sign of Gilmer’s professionalism. The county purchased 114 Flying Cross brand uniforms that bear the county name and one patch on the shoulder. Confirming that some employees had used uniforms from other places, Kauffman noted the new uniforms are to show off effort and hard work they do. Having upgrades to the fire department is one thing, but outfitting the employees’ uniforms is a matter of pride. 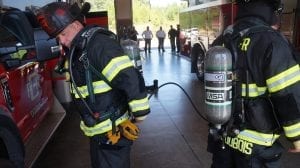 The new air packs host a special standardized feature to allow other firefighters to hook up to them to share their air in cases of pack failure.

The upgrades include everything in the outfit. Everything from head to toe on these firefighters is new. New jackets, pants, and boots are only the foundation. The department received new air tanks to double capacity from 2216 PSI to 4500 PSI. The tanks are the same size, not increasing the weight, but the extra capacity and pressure allow these men and women to operate longer in firefights.

These new tanks are also a part of a new statewide standard that has the capability for firefighters to go to a fellow firefighter, who may have fallen, blacked out, or is just having issue with his tank, and connect their line to his tank as well. This provides air to someone in a dire situation with tank failure. This system is already in use by the Ellijay Fire Department, improving the cooperation between the two agencies. 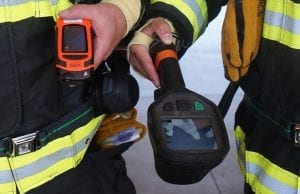 The new handheld thermal imaging cameras, left, are much smaller in size, but come with a shorter range than the larger, older versions, right.

Additionally, a firefighter is equipped with a pass device. If one stands still in their equipment for 15 seconds, alarms go off notifying those nearby alerting others through audio and visual alarms. They also come with newer voice amplifiers that are now constantly on and better quality sounds to facilitate communication. New Nomex hoods go under the jacket covering the head as well.

Through the Emergency Management Performance Grant, the department has purchased eight handheld thermal imaging cameras. Much smaller than the average camera used. With a 300 foot range, these cameras clip to the gear to be easily carried and used amid structure fires to both search for hot spots in order to protect firefighters and search for people through smoke or low visibility situations. Additionally, these cameras could also be used outside of structure fires in specific need situations like hiker falling off a bank. Though the technology has been around for years, the compact devices are more affordable now, as such the grants have made purchasing possible. 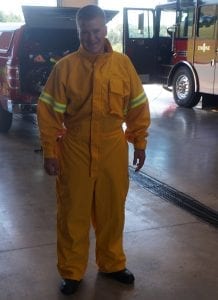 Much lighter, these Forestry Nomex Coveralls are used in cases of wildfires and similar, holding no air pack and much lighter, wildlands firefighter gear.

New upgrades to the fire department does not mean disposing of the old, however. Kauffman said, “Guys want to train in their gear. It allows them to train in gear that’s not designed for firefighting. And they don’t have to use their gear where they may damage it, rip it, or get it sweaty or smelly. We’ll actually mark the gear as training so it doesn’t get mixed up for fire fighting purposes.”

Kucera also said the department uses older gear like this for the Rangers Program and public events like last year’s appearance and gear tryouts at the Apple Festival.

This isn’t the only gear that’s new to the department, either. Through other grants, other sets of specialty gear of been purchased including forestry and chainsaw safety gear.

With the Association of County Commissioners of Georgia Grant, the Gilmer County Fire Department, 14 Forestry Nomex Coveralls were purchased for safety in the woods as these firefighters aid in controlled burns or find themselves fighting a wildfire as Gilmer has seen in recent years. A different process than structure fires, this gear provides different functionality. Wildfires are about control and containment instead of structure fires where they would enter for search and rescue and focus on extinguishing fires. This gear is also far more lightweight. 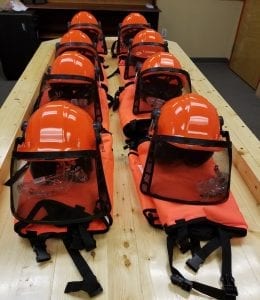 Arborist gear, purchased from recent grants in 2019, is used when utilizing chainsaws on downed trees and similar situations in Gilmer County.

Just as Gilmer aided in the wildfires in the past year, they are also on standby with the damage from hurricane Dorian coming through. With the department’s boats, usually used in rescue operations in nearby lakes and rivers, being on standby has specific travel supplies and equipment made ready and in staging positions if a need is called for.

The last set of gear, also from the Association of County Commissioners of Georgia Grant, eight sets of arborist gear will be used for storms, wind damage, and other needed situations as fallen trees are very common in Gilmer County.

A firefighter packs on an average of 60 – 80 pounds according to Kucera, but this new gear, including the expanded capacity air packs, handheld thermal imaging cameras, and standardized hosing and connectors, its 80 pounds of safety and protection. adding extra capabalities without massively increasing weight is just a part of these upgrades for the fire department as these men and women serve the community in what they do.

Their service is not just Gilmer County, but any in need through grants and agreements for mutual aid as well as disaster situations like so many communities are facing against Hurricane Dorian.