ELLIJAY, Ga. – Gilmer’s Land Ordinance could push our county into a metro city rather than our rural agricultural based feel. A comment from County Attorney David Clark offered his professional opinion on what could happen with the current ordinance’s density restrictions on land use ordinances.

Looking to changes that could limit some of that density growth, the topic was ultimately pushed to a later meeting, however, that decision came after a lengthy discussion on the proposed changes. Revisits to the ordinance have come after a Gilmer has experienced record setting numbers and sizes of developments in the county. In July of 2020, there were nine multi-lot developments with plans filed. An overabundance of developments like this could and is changing the face of Gilmer County. For better or worse is a split response among some citizens and developers. 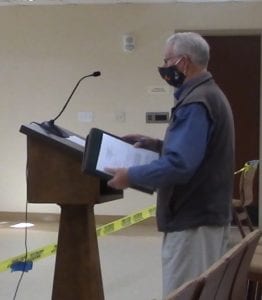 Even the County Attorney David Clark warned the Board on the possible outcomes of the ordinance as it appears right now. Commenting on the high number of developments, Clark said part of the need for a response was due to “the high demand that was being placed on the infrastructure that simply wasn’t there.”

Clark went on to offer the board his thoughts on Gilmer’s increasing population density saying, “Density is not a friend to an agricultural community. In my opinion, it’s the enemy.”

With notes referencing the county’s own emblem, he pointed out the major agricultural influence the county has through its poultry, apple orchards, and the mountain rural life. He also offered other counties as evidence including North Cobb and Paulding Counties when he was much younger.

Clark said, “Gilmer is known and is an agricultural community. The density that is allowed, the size of the lots that are allowed at this current time, is going to change that.”

The continuing density growth and concerns have been echoed through citizens comments on recent topics such as the Flint Mountain Holdings’ 305 lot major subdivision on Highway 282. However, the Board is currently looking at the Land Ordinance to possibly address these issues.

More recently, September saw a major moratorium on certain subdivisions, greenspace developments, and Class E Roads. These large developments are now continuing to push for a return to work since that moratorium. However, discussions on the Land Use Ordinance are continuing after minor confusion on some of the recommendations from the Planning Boards and the needs of what the Commissioners and the people of the county desire for the ordinance and for developments in the future.

Clark called Gilmer County’s future a “bedroom-subdivision of Atlanta” if the major density increase is kept as is. This could support increasing numbers of people working from home. The allowance of unrestricted developments could lead to this outcome. However, he said it ultimately comes down to what the Commissioners want Gilmer to look like “30 years down the road.”

He reiterated that some restrictions the board is considering is a major part of shaping that future.

Speaking with Public Works Director Jim Smith, the Commissioners heard more concern for loopholes within the ordinance and fixes that Smith wants requiring rezoning from R2 high density in situations that do not meet certain requirements. Smith also spoke about county roads needing support in the face of these developments. Especially since these roads were not built to handle the traffic and wear due to the adverse impact.

Smith went on to add that he believed a solution for roads be that the developer need pay for the improvements that the roads require rather than setting that burden on taxpayers who must have the Road Department go out and improve, fix, and upgrade the roads.

The county is currently looking at the ordinance and taking in these and other comments as they are attempting to address all of these issues, ultimately trying to balance its growth with density, developers, roads, and citizens’ needs. Yet, no final action has been taken. Instead, the commissioners are listening to citizens and hope to address these issues either next month or in a special called meeting with possible changes to the ordinance to keep Gilmer away from issues like these. Chairman Charlie Paris even released a statement reassuring citizens that he is listening.