ELLIJAY, Ga. – “I’m tired of the fight.” Board of Commissioners Chairman Charlie Paris said this Wednesday, July 13, 2022, when he began the discussion of River Outfittrer’s licenses along the Cartecay River where the county owns property used as a takeout spot for river tubers.

The county has placed ordinances on the rivers within the last several years reaching back to previous Post 2 Commissioner Travis Crouch as the county dealt with a range of issues like increasing trash, intoxicated people and glass debris, complaints from property owners, and major injuries along the area. Banning alcohol and enforcing certain rules, many have said that the state of the river has improved and gotten cleaner and prettier. These additional ordinances also placed a one dollar tax on every tuber going down the river that has since paid for several improvements at the takeout location, including adding signs and clearing trees and debris for easier access.

Paris noted in the July Work session that is still getting complaints on the area with crowding and other infractions. He added that these recent complaints have been accompanied by photos and videos of the infractions. Private property flanks the river along the course that tubers use as well as pushes up to the takeout point.

With shortages in deputies in the Sheriff’s Office, the board discussed that an officer could cut off some of the issues, a topic that has been discussed before and would be revisited numerous times in July’s work session and regular meeting as the board discussed the issue amongst themselves and river supporters flocked in to speak at the regular meeting. With the two businesses making profit off of the river and the county property as a takeout, discussion turned to how much the county and its taxpayers should financially put into the area.

Paris noted that he didn’t want the county to have nobody operating on the river as he didn’t want visitors to arrive and “find the doors closed.” However, he stated he was done with the back and forth over rules, ordinances, adherence, and attitude with certain operators.

Supporters, owners, and employees from both Ellijay River Outfitters and Cartecay River Experience spoke in Thursday night’s, July 14, 2022, meeting saying that they have been adhering to county ordinances and noted several times that many of the complaints come from a single homeowner who has harassed and even released a dog on them in the area.

One speaker said he owned property close to the takeout and has not had issues and had also spoke with a couple neighbors who also haven’t had issues. Another spoke on private tubers who either own property or are renting a cabin on the river also use the takeout as well as other residents who don’t live on the river but use their own equipment and put in at different locations bypass the outfitters and the large signs the put up at their launch locations. These private citizens don’t see the ordinances posted or have employees telling them not to bring banned items and to follow county ordinances.

Matt Bond spoke specifically on the issue saying that he understands the county’s point and told them “you aren’t alone.” Bond went on to speak about the ordinances saying that he the outfitters should and are informing people about the rules and there has been a marked improvement on the river due to that. However, he cautioned the county not to make the outfitters become “enforcers” of the ordinances as he said the county has people with the authority to address that. Bond stated, “I think what, more than anything, I fear is asking the outfitters to be enforcement. That’s a little scary if they have to become the peace officer, the one who enforces these rules.” 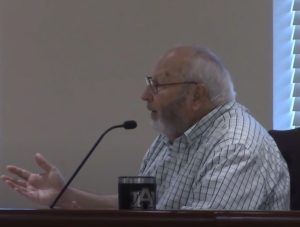 Enforcement was also addressed by Tripp Janssen of Cartecay River Experience. He noted that every single person using the outfitter he works at is both told and shown the sign with the rules. He said that they operate within the ordinances everyday. As discussions continued on enforcement between him and the board, Janssen stated, “What about the Security Guard deal, because I would like to do that so we can get no more complaints. Cartecay River is willing to pay half of that.”

Janssen had also stated that Cartecay River Experience customers are identifiable by their black vests and labels. Something that could help with a guard at the location.

With many speakers pointing to one complainant, Paris noted that he hasn’t been hearing from only one person. Janssen stated that they have been hearing consistantly good comments on the state of the river and the outfitters operations to maintain it and the takeout.

Post Commissioner Karleen Ferguson also made note of the river’s improvement over the years, she also called for outfitters to be responsible in their operations and adhering to the ordinances. She also showed some support for the idea of the guard as she discussed the option in the work session and asked for the item to be added to a special called meeting as the river season is drawing closer to its end in the coming months and mentioned how busy labor day can be.

Rachel DeShields spoke about her experience tubing the river in two locations, one not kept up by the outfitters and the section where outfitters operate. She noted the major difference as her and her family lost tubes that kept popping or getting stuck under downed trees or under overgrowth from the banks. Conversely, she said that when they started using the outfitters’ section, a much cleaner and safer option for them. DeShields told the board that they do a lot to keep the river in good maintenance.

DeShields asked the board to continue fighting for the rivers and working with the outfitters to aid in what they do, she stated, “It’s worth it. We all have this beautiful thing here that we get to share and I think its worth the challenge. It’s worth the fight.”