GILMER COUNTY, Ga. – With a special called meeting today, July 28, 2022, the Gilmer County Board of Commissioners advertised their Rollback Millage Rate at 5.541 mills.

This is down 0.681 mills from last year’s 6.222 mills. According to calculations from Gilmer’s Finance Department this represents a growth of $1.3 million that the rollback rate covers.

The five year history of the digest shows that the millage has decreased since 2018 when the millage rate was kept at 6.983 from the previous year. Post Commissioner Hubert Parker voiced an opinion to provide a further decrease past the Rollback Rate in the Special Called Meeting. 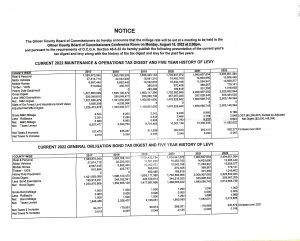 With a motion from Chairman Charlie Paris seconded by Post Commissioner Karleen Ferguson, discussion opened for the commissioners to discuss the topic. Parker proposed the further decrease siting inflation as a real issue that citizens are facing. Paris responded that the county has also been feeling the pressure of inflation noting several increases the county is already dealing with through changes from prices originally bid to the county in January and its new solid waste management company, Waste Pro, currently under renegotiations of their contract due to rising costs of gasoline. Ferguson agreed with Paris saying that this was also her thinking when considering the rollback rate.

Paris noted that further reductions past the Rollback could see the county using its operational reserves as rising prices are continuing to grow. Paris noted that even with the Rollback Rate he has concerns over creating the 2023 budget and funding the county’s services. The 5.541 mills is estimated to levy $11 million in property taxes from the $2 billion 2022 Net Digest. This Net Digest has nearly doubled since 2017 when it sat at $1.2 billion. Even with the 5.541 mills Rollback Rate, the county is estimating over $600,000 added to the county budget. 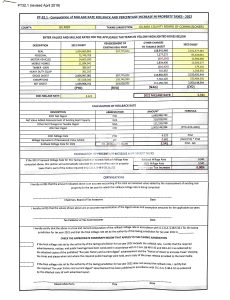 Calculation of the Rollback Rate with the 2022 Tax Digest for Gilmer County.

Yet, the county is already looking at rising costs affecting the current 2022 budget. Chairman Paris stated, “I’m very much concerned that we’re going to have to dip into our reserves in our 2022 budget, nevermind the 2023.

Not reaching a full consensus, the board said that advertising at 5.541 mills would be the first step, but they could decrease it at a later date before the final approval. The only thing they couldn’t do is increase it before then. With that they unanimous approval came for the Rollback Millage Rate. The Board of Education will hold a meeting to approve advertisement of their Millage Rate and then another Special Called Meeting will see the school give final approval of their rate before the county approves their own and the school’s millage rate together.