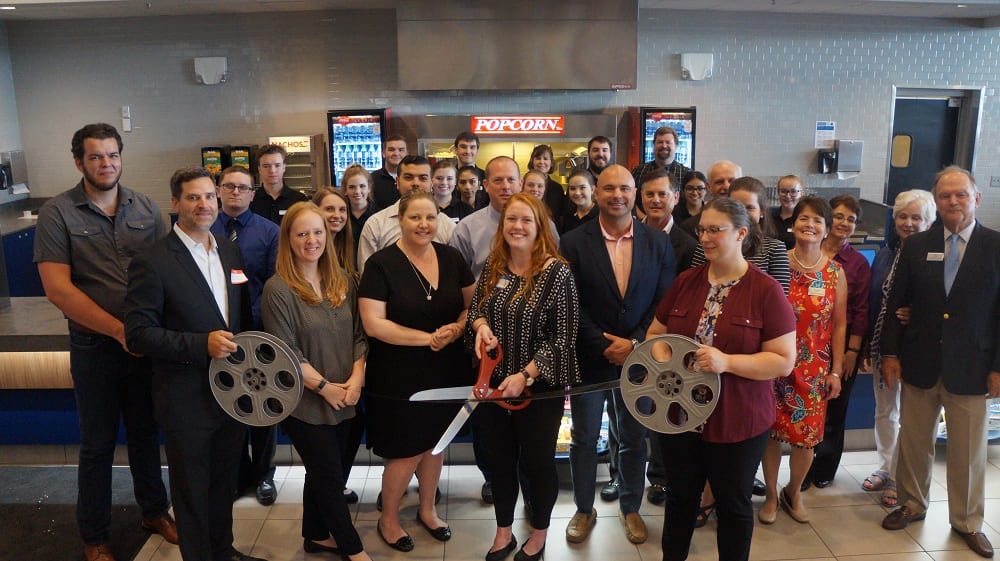 East Ellijay, Ga. – Though expected for almost a year now, the Georgia Theater Company (GTC) has officially opened its doors on its newest addition, Mountain Cinemas in East Ellijay. 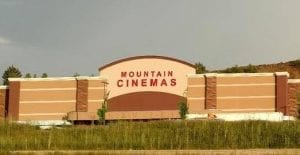 The theater boasts eight screens of digital projection film, an in-house bar and grill called Outtakes, and usual concessions like popcorn and candy. Each theater is filled with reclining seats operated automatically with arm-rest buttons.

While all food and drinks from the concession stand or the Outtakes grill are allowed inside the theaters, they also host a few small tables in the lobby for those who wish to sit there.

The movie theater hosted a “film-cutting” this week to celebrate their opening with corporate guests like Chairman of the Board of GTC, William Stembler, and GTC President Bo Chambliss.

Chambliss specifically thanked Mac Wood, City Manager of East Ellijay, as the key to making the construction of Mountain Cinemas “a whole lot smoother than most of the construction projects that we’ve been a part of.”

Stembler joked with those present about the theater’s seats saying, “We have these recliner seats that are really comfortable. If you go in the theater and you fall asleep, we’re not gonna give you a refund.”

However, one thing to note about the new theater is that the seats are numbered. Marketing Manager Kate Sabbe did say you could buy your seats online, meaning that you don’t have to show up early for seats as the ticket will save those seats. However, the flip side would suggest that if you have any sort of sizeable group, it may be wise to purchase tickets well in advance for popular movies if you want to sit together. 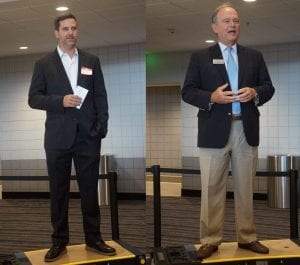 The larger main screens, headliners, hold 145 people while the smaller screens hold between 70 and 80 people for a grand total of 836 seats.  Mountain Cinemas Manager Lauren Chastain said the building will move some major movies, like the upcoming Jurassic World, into multiple screens meaning it will at times hold less than 8 movies. Currently, it’s showing six films on its opening weekend.

Established as the leading form of GTC theaters, Mountain Cinemas represents everything the company could bring to bear as a cutting-edge representation. Though they declined to include 3D movies, this branch is what GTC is currently in renovations mode at several of their other locations to meet. Mountain Cinemas also hosts an open kitchen for Outtakes, something Chastain said is not done at any other location. The new building has brought, including management, a current total of 53 jobs to East Ellijay.

A part of Outtakes, the bar inside of the theater already hosts local favorites like those from Blue Ridge Brewery “Grumpy Old Men” and a hard cider from Mercier’s Orchards in Blue Ridge. With eight total beers on tap, Chastain said the bar is trying to stay with local Georgia and Tennessee breweries over a few general ones like Budweiser. 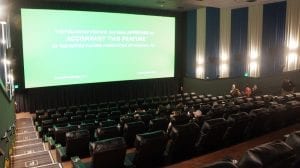 One program the company holds already saw a special day of afternoon tickets for the Gilmer High School Film Program. Sabbe told FYN that the company as a whole has a program every fall where general manager’s of the theater locations get to choose a charity to donate one day’s entire proceeds to. This, however, was a part of the Grand Opening Celebrations to say thank you for welcoming Mountain Cinemas to the community.

While the building is completed, Chastain and Sabbe both indicated that the theater is not running every program the company has yet. 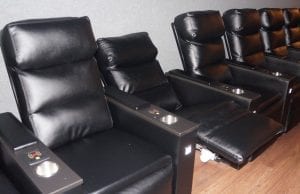 The fully reclining seats are operated electronically for back a foot rests.

The theater company also hosts a program at 14 locations called Flashback cinema where they play hit movies from older periods like Raiders of the Lost Ark or Big Trouble in Little China. With only 14 current locations operating this program, Sabbe was unable to say when or even if the program would travel to East Ellijay’s new location.

One program Sabbe did say East Ellijay will likely see next summer is a program for reduced-price kids movies. The program would provide $1.50 tickets, $1.50 drinks, and $1.50 popcorns for children.

With these to look forward to, the Georgia Theater Company officially cut the film tape to christen its newest cinema and open its doors to the public.

The “Film-cutting” kicked off the two-day celebration leading into this weekend as Mountain Cinema’s first weekend of operation. After much hype, debate, and waiting, the theater is officially open.

General Admission is $9 for adults and $7 for kids and seniors. Matinee showings are $7 for everyone.