ELLIJAY, Ga – Gilmer County’s approval of the Second Amendment Sanctuary came last Thursday with all three commissioners voting yes for the resolution and sparking further debate over the issue’s future.

That resolution states, “The Gilmer County Board of Commissioners will not authorize or appropriate funds, resources, employees, agencies, contractors, buildings, detention centers or offices for the purpose of enforcing or assisting in the enforcement of any element of any unconstitutional acts, laws, orders, mandates, rules or regulations that infringe on the right by the people to keep and bear arms.”

Following the work session’s crowd of people and numerous people stating their support of the resolution, the debate arose on whether to adopt a resolution or an ordinance.

Jason Williamson spoke at both the Work Session and Regular Meeting of the Gilmer BOC speaking on the petitions gathered and the need to make this statement as a county. He said in the regular meeting that over 700 people had signed the petition asking for the Second Amendment Sanctuary status.

Taking a “proactive” approach, Williamson said he and others want to step out ahead of any problems which they see are inevitable in today’s political climate. 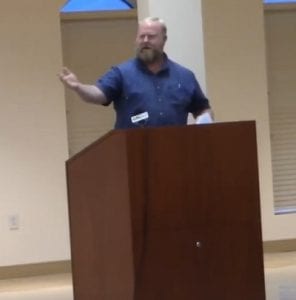 However, Williamson was not the only person speaking on behalf of the resolution as Joene DePlancke was also present in both meetings to support it. DePlancke asked that everyone at the Regular Meeting who supported the resolution to stand and nearly every person present, filling over half of the County’s Jury Assembly room in the courthouse, stood.

DePlancke went on to say, “The reason that we feel so strongly right now is that, over the years, we keep losing more and more of our freedoms by not doing anything.”

More people spoke as well in the meetings saying they supported the resolution with one individual saying he felt it wasn’t just the Second Amendment, but rather all of citizens’ rights in the Amendments are under attack.

The commissioners assured citizens in the work session that this wouldn’t mean the county would stop doing background checks or gun permits, but rather would oppose any state or federal law that would infringe on the Second Amendment. The Resolution states, “All federal acts, laws, orders, rules, regulations that violate the Second Amendment to the Constitution of the United States or Article I, Section I, Paragraph VIII of the Constitution of the State of Georgia, violate the true meaning and intent of those constitutions are hereby declared to be invalid and are specifically rejected in Gilmer County, Georgia and shall be considered null and void and of no effect in Gilmer County, Georgia.”

FYN previously reported that the board approved a resolution and did have some talk in their work session about looking further into the possibility of an ordinance. Williamson, as one of the leaders of the movement, stated before the meeting that he wanted an ordinance over a resolution because it would be harder to change and require more opportunities for citizens to fight any changes.

FYN reached out to Williamson after the resolution passed for his response. Williamson stated, “A resolution will suffice, but we will actively pursue the ordinance once we can navigate the state laws and create an ordinance that will reflect current law and assist in maintaining our rights.”

The debate continues to flow on social media as people on both sides of the debate offer opinions.

Gene Levine stated, “Even if it’s symbolic, do it. I think Virginia will be a test bed for the effectiveness of sanctuary counties, I hear something like 90 county sheriff’s are proposing this. I realize that the feds can enforce these laws in any of these counties, but they don’t have the resources to enforce these laws on thousands of gun owners and they don’t even know who has these guns.”

On the opposite side, Andy McClure stated, “It only states that no county official or employee can enforce any federal or state law that infringes upon the rights of Gilmer citizens. It does not mean that the state cannot send the GBI, or the feds could send the FBI or ATF to enforce such laws.”

As citizens continue the debate, it seems this issue is still not completed as the Commissioner’s left room to discuss a possible ordinance and some like Williamson have already said they want to pursue more in terms of the ordinance.