County Commissioner Charlie Paris stated during the meeting, “This is, essentially, the very same resolution that was presented to us initially. We’ve just had two or three very minor, one-word type changes.” 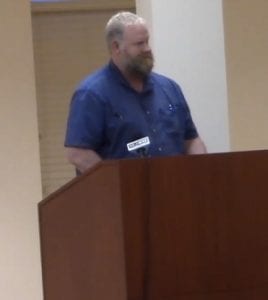 Jason Williamson speaks to to the Board of Commissioners about the Second Amendment Sanctuary at Thursday Night’s, February 13. 2020, meeting.

The minor changes were not unexpected as even Jason Williams, one of the initiators of the agenda item and the one who submitted the collected petition signatures to the county, told FYN last week that he expected the County Attorney, David Clark, to have a few such changes for legal wordings or clarifications.

Applause came from the crowd as the motion and second came and was finalized by a yes vote from all three commissioners for the resolution to support the second amendment in Gilmer County.

Stay with FYN as we delve into the citizens comments and responses to the approval along with the actual resolution wording over the next few days.