Downsizing its facilities due to moving offices around, the Gilmer County Board of Commissioners is now looking to sell their building on the square that has been used recently as the Planning and Zoning office. 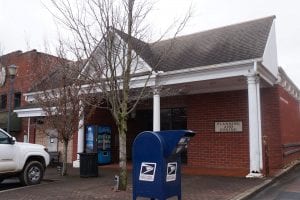 Gilmer’s former Planning and Zoning building is located in the square immediately south of the courthouse.

The property disposal came before the commissioners in a Special Called meeting under an agenda item that encompassed both the “disposal of the property” as well as engaging a real estate agent.

Gilmer Commissioner Chairman Charlie Paris stated that engaging a real estate broker will begin with a bid process to the board to find an agent to use in the process. However, engaging the bid should follow broad language on usage. County Attorney David Clark encouraged this option of specificty to allow the Commissioners options down the road. He stated, “That gives you the option to consider it, but you don’t have to use the agent with the additional piece of property.”

This means that the county could use the agent to sell the Planning and Zoning building, but wouldn’t have to go through the agent for every piece of property that may come up.

Paris also clarified further saying that if they get another piece of property they need to sell, but wish to just auction it off, they could do this. However, if they do wish to go through the real estate agent again, they would not need to complete the bid process again at that time.

Having the bid process set one agent into this position, the county is also looking to only extend the contract by a specific time period. After that time they would need to rebid the services of real estate agent. With that in mind, Clark also suggested the contract would terminate after a year unless the agent was amid a selling process at the time.

The final decision came through two motions, the first came to take bids for a real estate agent to handle disposing of county property while reserving rights to dispose of property in other ways. The second came to dispose of the building previously referred to as the Planning and Zoning building. Both were approved by the two present commissioners, with Post 2 Commissioner Karleen Ferguson absent.

Along with the disposal in this meeting, another issue arose that could become a major issue. While the office of the Board of Commissioners is attempting to satisfy requirements for a DOT audit with regards to Gilmer’s Airport Professional Services Agreement. According to Paris, Georgia’s Department of Transportation is going through an audit process.

With no contract, Gilmer County could be held responsible for reimbursement of all the engineering costs since 2012. Clark explained that the county has tried other options to resolve the issue, but have been rejected. Now, the county will authorize the chairman to sign the contract with a retroactive effective date to satisfy the needs.

The county has been operating under the contract over the years, but has simply not signed the contract.