ELLIJAY, Ga. – A unique meeting saw the Gilmer County Board of Commissioners sitting with Ellijay Mayor Al Hoyle and East Ellijay Mayor Mack West to speak about the possibility of a new SPLOST cycle for the county as a whole.

While the Board of Commissioners could move forward with the SPLOST without the cities, joining together provides many benefits to each municipality including a more expansive list of projects without a state-regulated list of prioritization and a one-year-extension on the SPLOST cycle to make it a six-year program instead of just five years.

One of the major items needed in the meeting was an agreed amount that could be expected from the tax. According to regulations on the program, if a government puts forth a SPLOST and sets its expected return above what it actually receives, there is no penalty. However, if that SPLOST achieves the expected return early, no more collections could be made, causing a gap in collections and revenue from the sales tax.

With that in mind, the meeting came to a conclusion to estimate $31 million in revenue from the tax. 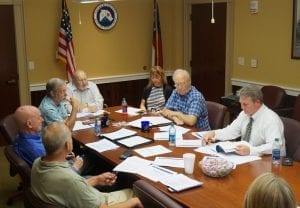 Both Mayors in the meeting looked to increase their city’s portions of the SPLOST in favor of rising costs of major projects, Hoyle spoke on Ellijay’s behalf saying that increase paving costs and projects that the city is in need of accomplishing could greatly benefit from an increase in their percentage.

Likewise, West echoed these concerns siting a specific project as they have repaved the area of Eller Road and the intersection at Highland Crossing before reaching Highway 515.

On the other hand, the county discussed the county’s continued financial pains attempting to pay back their bond debt, looking at the vast majority of their SPLOST collection dedicated to paying back that debt at close to $4 million a year.

Ultimately, the decisions came down very similar to how the SPLOST has been divided currently. With the County currently taking 92.35% of the SPLOST, they backed off the extra part of a percent making the division at an easy round number of the percentage.

The County will receive 92%.

Still, this negotiation is preliminary. Each Mayor will now take the proposal back to their cities for approval before the county can approve the final agreement and move forward with offering the SPLOST option to a vote for citizens. If all goes according to plan and no major obstacles are met, It could mean citizens could see the vote for this on the ballot this November.