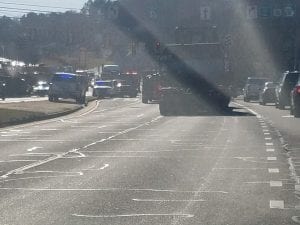 EAST ELLIJAY, Ga. – Authorities from Gilmer County Public Safety, East Ellijay Police, and Ellijay Fire are currently responding to what witnesses are calling a major accident at the intersection of First Avenue and Highwy 515 near Hardee’s.

Authorities have shut down the Northbound lane of Hwy 515 at this time as they assist with those involved and attempt to clear the road.

East Ellijay Police Chief Larry Callahan has confirmed one person is in critical condition. There are also at least two others classified as injured, but are well enough to be walking.5

Citizens should use Highway 52 to travel past the accident before returning to Highway 515 Northbound via Greenfield Road. FYN has reached out to authorities for comment on the clean-up and condition of the accident and is awaiting a response as they continue to respond to the incident. 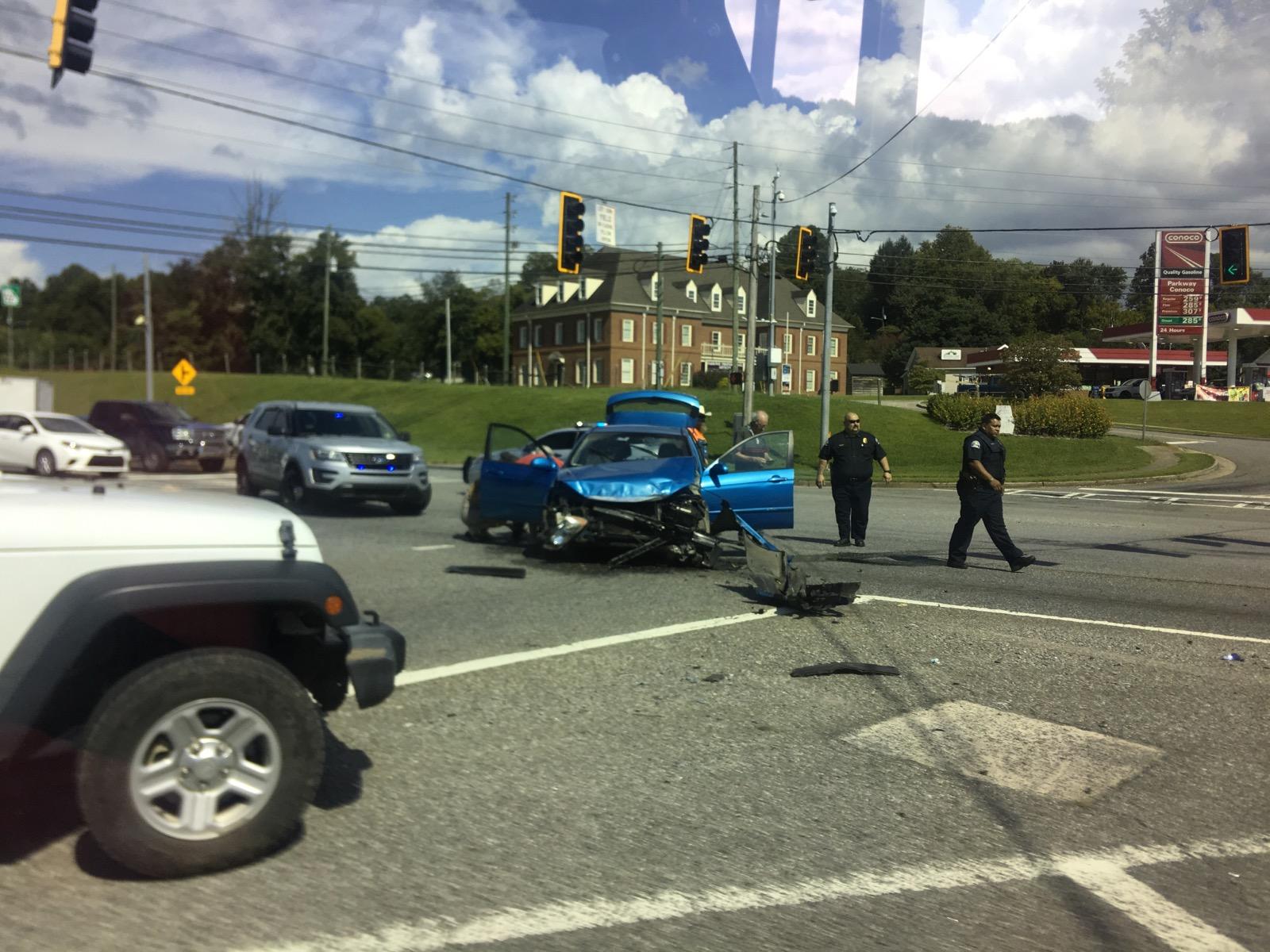 EAST ELLIJAY, Ga. – Citizens are being encouraged to avoid the intersection of Highway 515 and First Avenue right now as authorities are responding to a major accident. 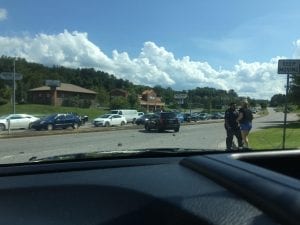 Police, Fire, and Rescue personnel are on scene as usual with accidents like this but no reports are available yet as to the injured.

Additionally, the accident has spread debris across most of the northbound lane of the intersection. Traffic is at a standstill right now as the accident happened within the last 30 minutes. Authorities are tending to those involve while attempting to clear a path and redirect traffic.

If at all possible, avoid this intersection at this time until authorities can address the accident. 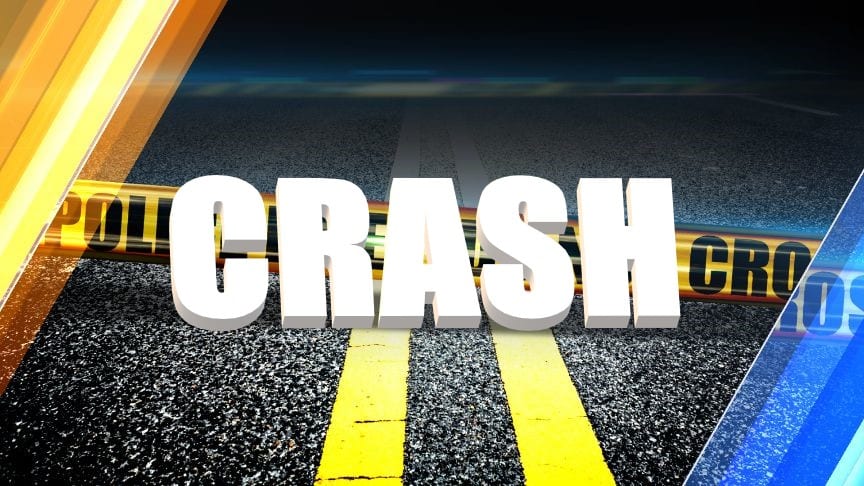 ELLIJAY, Ga. – The Gilmer Sheriff’s Office has confirmed an accident on Highway 515 shutting down lanes on the road.

The accident only involved a single vehicle. The vehicle rolled during the accident. It occurred on Highway 515 near the Gilmer-Pickens County line.

Authorities are responding to the accident and citizens are cautioned in the area. With lane closures and authorities on the road, make plans to take extra time or an alternate path around this accident. 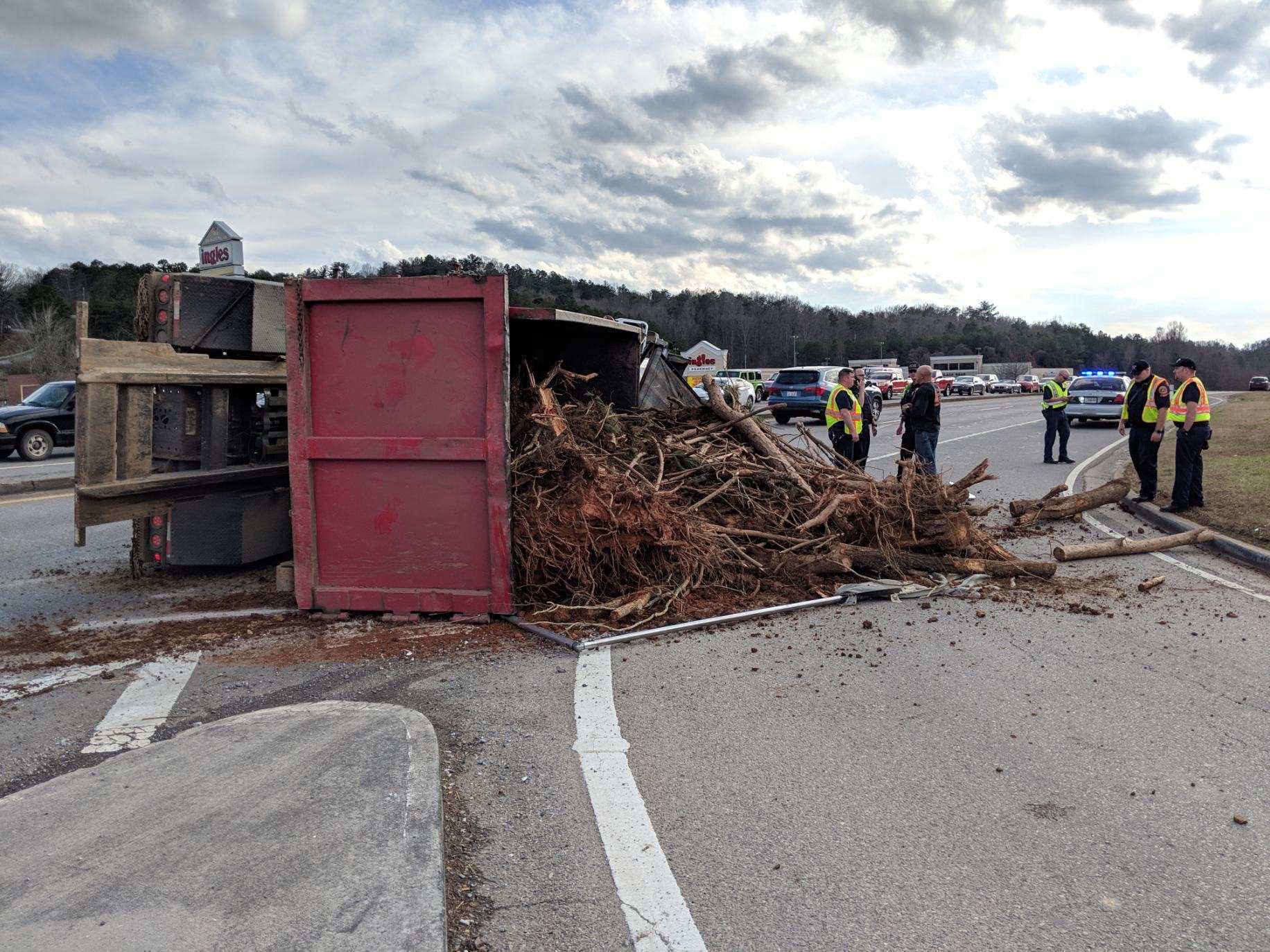 ELLIJAY, Ga. – A logging truck has overturned at the intersection of Maddox Drive and Highway 515.

According to authorities on scene, no major injuries were sustained. However, traffic is suffering from the accident that occurred at 4:00 p.m. this afternoon, February 7. Chief Callahan told us the driver had turned to go southbound from Maddox when his load shifted which caused him to turn over.

Law enforcement has asked citizens to find another route and expect delays as they attempt to respond to and clean up the accident. They are unsure how long the delays could last at this time. 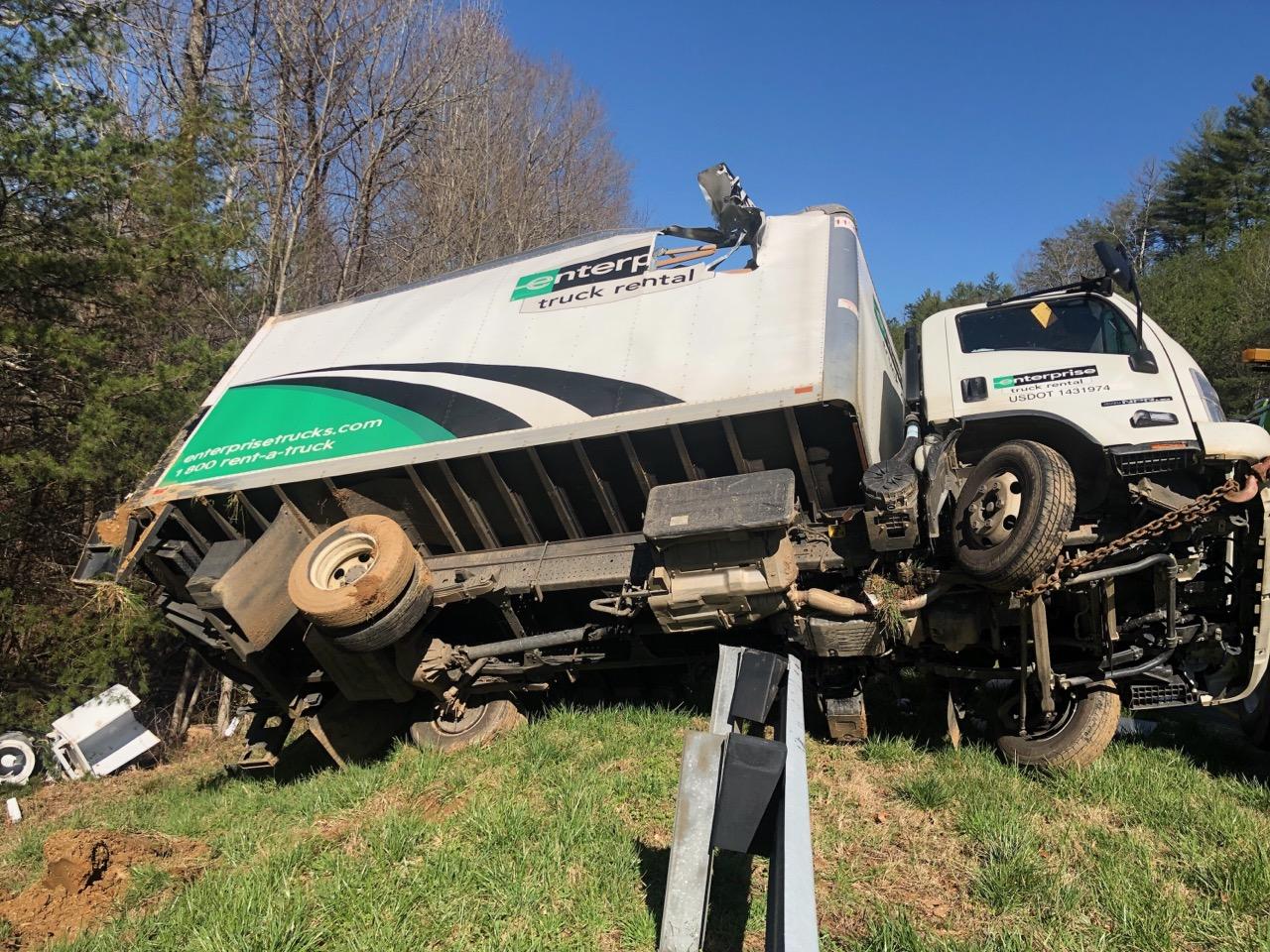 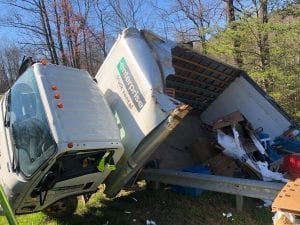 Authorities on scene worked quickly to clear the right lane of northbound traffic as nobody was seriously injured in the accident. The truck went off the road and came to rest on the guard rail near Highway 515 Auto Auction.

According to Gilmer County Public Safety Director Tony Pritchett, two people were in the truck at the time of the crash. At this time, Highway 515 is open to traffic again while workers are clearing the road. 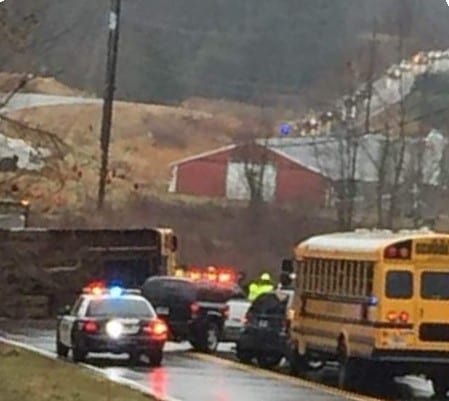 According to the report, officials say the bus driver, 71-year-old Harold Moody, says he drifted onto the shoulder as he was reaching for his microphone and looking into his mirror at the students on his bus.

The report states Moody was “distracted” while he was driving by using the microphone and causing him to drift off the east side of Yukon Road before striking a culvert and veering back across both lanes before overturning and coming to rest blocking the road. Moody was not injured in the accident.

Vehicle 1 was traveling north attempting to negotiate a curve on Yukon Road. Vehicle 1 drifted and traveled off the east side of Yukon Road causing the driver to lose control.
Vehicle 1 traveled north on the east shoulder into a ditch. The undercarriage of vehicle 1 struck the ditch culvert. Vehicle 1 veered left and travel west across both lanes of the
roadway. Vehicle 1 overturned and came to an uncontrolled rest facing west on its right side across both lanes of Yukon Road.

Driver 1 stated that he reached up to grab the microphone and looked at the rearview mirror to address the student passengers. He stated that the student passengers were being loud and using profanity. Driver 1 became distracted by using the microphone and looking at the rearview mirror while attempting to negotiate a downhill curve.

School officials have already confirmed the use of a substitute driver after having placed Moody on administrative leave. Read more about the accident with “Bus wreck on Yukon injures students,” “Responding to Gilmer’s bus wreck on Yukon Road,” and “Ralston speaks on Yukon bus crash.”

ELLIJAY, Ga. – While local citizens continue discussion of Monday’s incident involving a bus overturning on Yukon Road, the discussion has spread to the state capital as Georgia Speaker of the House of Representatives David Ralston released an official comment today.

“I’m so thankful no one was hurt in this week’s school bus accident.  While the road the accident occurred on is maintained by the county government, I’m willing to discuss state involvement in addressing any safety concerns with the road if the county feels that state involvement would be helpful.  I’m just glad that there was an emergency medical facility in the county which could treat the children who were injured.  The last time a serious bus accident occurred in Gilmer County, that wasn’t the case.”

As some have addressed concerns over the area of Yukon road where the accident occured, FetchYourNews has learned that county officials have been looking into the road this week since the wreck. While no official statement on their progress is available at this time, this comment from Ralston could open discussion for possibilities in the future.

Citizens are continuing to debate the incident with the information available. FetchYourNews (FYN) sat down to discuss the situation further with Gilmer County Charter School System Superintendent Dr. Shanna Wilkes. Though she reiterated that details such as the name of the bus driver and the specifics of the State Patrol were unavailable, she did update that the Georgia Department of Transportation’s (GDOT) required investigation of the bus proved the bus sound and complete excluding the damage caused by the wreck.

This means that while some had questioned the bus’s condition at the time of the incident, a formal investigation has stated the bus itself was not at fault. Of course, with the damage to the vehicle, Wilkes tells FYN that the bus will obviously not be put back on the road. Instead, the system has put one of its back-up buses into use and is utilizing a substitute driver on the route. No other bus routes or drivers have been affected by the incident, and Wilkes confirmed that the school utilizes substitute drivers regularly in its operations.

Going deeper into the bus condition, Wilkes commented that the bus maintenance program follows stringent schedules regularly inspected by the GDOT, which also inspected the bus after the wreck. As the bus garage adheres to those schedules, they monitor each bus’s engines and details down to measuring the tread on tires.

The driver of the bus that wrecked has been with the school for over three years but has been placed on administrative leave for now. Wilkes said that such leave is common but would not comment on the driver’s permanent status with the school until the investigation completed.

Wilkes also took time with FYN to deny a rumor of a fight on the bus distracting the driver saying, “I can tell you that there was no fight on that bus at the time. That is one rumor I can completely squelch.”

Though not every question is seeing answers at this time, details continue to reveal as more unfolds.