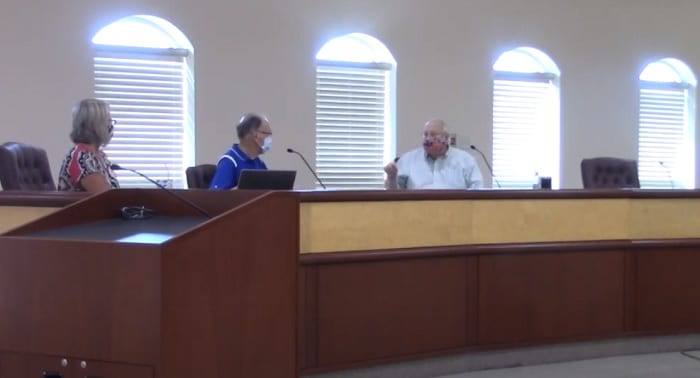 ELLIJAY, Ga. – Gilmer’s Board of Commissioners discussed their Millage Rate in a Special Meeting this July without one of its members.

Having contracted COVID-19, the board’s third commissioner, Karleen Ferguson, was absent from the meeting for health and safety. The two remaining commissioners discussed accepting the rollback rate versus not accepting it.

Very early, Gilmer Commission Chairman Charlie Paris voiced his opinion to accept the rollback rate saying, “My personal position would be that we should take the rollback rate. It’s not going to hurt us terribly and I don’t think this is the year to be trying…”

Post 1 Commissioner Hubert Parker agreed saying that he was good with the Rollback as well. 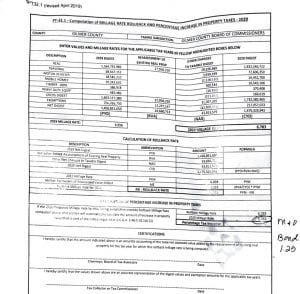 The worksheet showing the preparation of the 2020 Digest and formula calculating the Rollback Rate for Gilmer County.

However, additional discussions turned to the Bond Millage Rate for the county. With discussions last year on reducing the rate, the Commissioners ultimately decided against it, keeping the 1.5 mills, but promising to revisit the idea in 2020. Now, Parker and Paris began discussions by immediately moving to a debate on whether to reduce it by .25 or .15 mills. Paris noted that work still needs to continue in capital projects and expenditures coming in the Road Department as well. Having the Bond Millage pay off part of the bond debt service allows more SPLOST funds for those expenditures.

Parker offered his opinion on the Bond Millage saying, “I would be fine going with .25.” However, he did mention a desire to look at it again later. Looking at the decreases, Paris said he didn’t have a problem with reducing it by .25 mills to a Bond Millage Rate of 1.25 mills.

The rates were approved by two separate motions as Paris made a motion to approve advertising, it came to accept the Rollback Rate of 6.783 mills. The rate was approved by the two present commissioners.

Then came another motion from Paris to have “the Bond Millage Rate be reduced from 1.5 mills to 1.25 mills.” The rate was approved by the two present commissioners.

Moving forward, the Commissioners are looking for another Special Called meeting towards the end of August to formally adopt the Millage Rate. They have to wait for the Board of Education to adopt their rate in August before the County can formally adopt both rates.