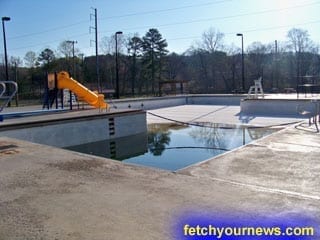 ELLIJAY, Ga. – Due to the months of preparation and study given to the county’s formerly favored location, Gilmer County Commission Chairman Paris stated today that Soccer Field Road, just off of Progress Road, has been declared an unviable location for the future pool of Gilmer County.

The location was originally offered as part of an agreement with East Ellijay to purchase and provide the land. Paris said that one of the reasons for this came with the several analyses performed and the realization that the county would need to move and bring in an extra 86,000 cubic yards of dirt for grading and leveling.

Considering that, he noted that if the county would have to begin looking at the costs of purchasing land anyway, considerations for the old pool’s location arose. Paris stated, “One of the reasons that we decided to put it somewhere other than where the current pool is is because of the expense that would be incurred in tearing out the old pool and putting the new pool there. But, if we’re going to have to be looking at buying property somewhere for the new pool, we might as well just spend the money tearing out the old pool, and just put the new pool back where the old pool currently is.”

Later, Paris told FYN that if the county moves forward with that pool location, they would likely be expanding into the parking lot for the secondary “wading” pool. Additionally, the concept of someday adding a splash pad might have to be considered in a different location. Many plans that were being considered for the Soccer Field Road location are still being considered, such as utilizing dirt from the 382 project if found to be usable.

Paris said that considerations for fitting both pools at the location is already being looked for feasibility. Paris also noted that Recreation and Parks Director Kevan White assured him that the tennis courts currently under construction next to the civic center will not interfere with construction as they will be completed by year’s end.

Paris indicated he is still looking for ways to seek ways to handle the costs of the pool when he said there is considerations that the county might use some of its employees for clearing and preparatory work if the county does move forward with that location.

The remaining question is balancing how much of the parking lot will be lost to the secondary pool and the effect on attendance. Paris said he doesn’t foresee a major problem in that area, but was unsure of exactly how much of the parking would be changed. Additionally, he noted that the county will be transitioning the older tennis courts into additional parking for River Park as well.

While this was just announced as a possibility today, it already seems to be a front runner of options with the considerations and statements made in today’s Commissioners’ Meeting. However, neither Post Commissioner Karleen Ferguson or Chairman Charlie Paris declared the old pool location as the final decision for the new pool’s location.