ELLIJAY, Ga. – “It’s going to look like a runway,” said Leon Watkins in the Commissioners August Regular Session. He was speaking about Boardtown Road in Gilmer County and the project for massive poles and a transmission line along the road.

A letter went out last week gathering support and other citizens to speak with locals asking to relocate a project that they say would destroy Boardtown Road. A 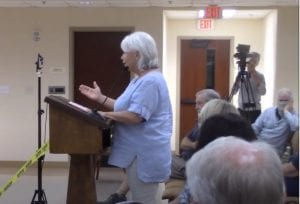 Answering that call, numerous citizens appeared before the Gilmer County Board of Commissioners at the August meeting to speak about the Georgia Transmission Corporation (GTC) and the major project they are undertaking. All of those that spoke at the meeting did so in opposition of the project’s current location.

Some asserted later in the meeting that they didn’t want to publicly oppose the project of improving electrical reliability in Gilmer. However, the common theme that every single speaker of the night on this subject shared was the concept that putting these large poles in the middle of people’s yards and farms would be a detriment to the area. It is the path down Boardtown that is being opposed.

They said that the project would not only individually detriment their own properties in both property value and natural beauty, but spill over into the entire road and surrounding area.

The Citizen’s wishing to speak section started with a question, “Why can’t the county deny permission for the line and right of way?”

The question spilled over into other speakers saying the preferred route should go down Highway 515 as a major road.

As Commission Chairman Charlie Paris explained that he has already looked into the issue trying to see how the county could help, County Attorney David Clark explained that his understanding was that the GTC could use imminent domain on the area to force the project through, leaving both the county and local citizens with no voice in the matter.

The GTC did hold three public meetings encouraging social distancing and an extended format for people to come and go during the hours of those three meetings. Citizens speaking in the Commissioners meeting told the board that the GTC already had their plans and surveys set before the meetings ever started. The meetings, they said, were there providing information to citizens on what is going to happen and not solicit input on a project before planning.

Clark told citizens they should also be speaking with local EMC board members to see if they could also be helping people with the issue in addition to the work they had already done. 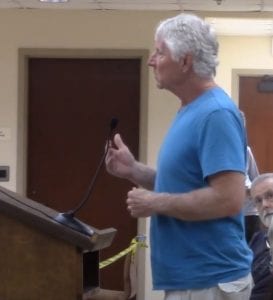 Yet, Melanie Johnson said that she has already spoken with representatives of both Amicalola EMC and GTC. She alleged that many of the Georgia Transmission representatives gave different, misleading, or wrong information as they have pushed into the project. She said that in the beginning they collected signatures for surveys saying alluding that they would simply be replacing and upgrading current poles.

As conversation continued with citizens offering similar complaints against destroying the native beauty or having massive steel and concrete poles put into their properties.

Johnson asked for a public show of support from Commissioners as she hoped to push the issue to state representatives such as Georgia Speaker of the House David Ralston and State Senator Steve Gooch. A letter of support was one of three actions citizens asked for during the meeting.

Echoed by several citizens including Robert Armour and Develle Frady, the show of support through a letter that citizens could use to have the extra authority was a great step that citizens said they appreciated. Yet, Armour asked the commissioners to take it step further. The second action that he asked for was to not just write a letter, but to have the commissioners physically call them for support.

He later returned to the podium and expanded his request asking the commissioners to initiate a meeting for residents in the area to speak directly with these state representatives to implore them for their support and to assert the importance they hold for the issue.

Frady said he has already seen the issues that road has suffered from the gas line put in. His main concern is the heavy weight traffic this would put on the road with bridges already in poor state and some with maximum 5 ton weight limits. “The bridges and culverts will not hold the 60 ton frames they will need to erect those poles,” he said. 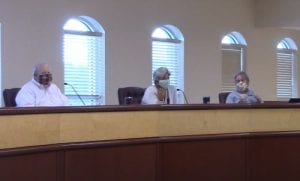 Post 2 Commissioner Karleen Ferguson voices support for residents opposed to the large transmission lines to be built on Boardtown Road.

Paris himself said that the Georgia Transmission Corporation is a state level agency. He added, “I have felt frustrated because I am not aware of anything the county can actually do.” Yet, he said that he would have no problem at all supporting citizens in this way that they have requested for the letter. He also told citizens he would work towards a meeting if poss

The third option and request citizens asked for came in several citizens asking for the commissioners to pass an ordinance for some sort of protection against the transmission line in the area. One said they should enforce right of ways against the poles. Frady mentioned county documents claiming 80 feet of right of way, but the GTC told him they had 100 foot right of ways from the road.

Kevin Kell spoke in the meeting saying that he owned 20 acres on the road and is second guessing plans for building a home. He said that people come to Ellijay for the “beautiful, unspoiled views.” He said his experience as a banker leads him to believe that this is not the only option for GTC, but is the cheapest option. Kell also echoed the issue of the effect on property values. 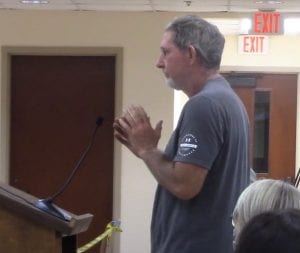 Boardtown area resident and member of the Board of Education, Ronald Watkins speaks alongside citizens who are asking for help in relocating a project for high voltage transmission lines and poles on Boardtown Road.

Stressing the importance of the issue, Ronald Watkins, current member of the Board of Education and resident in the area, said he wouldn’t be getting a pole on his property, but would be getting one right across the street from him. He repeated the major issue of the utter destruction of the natural scenery and scenic views along the road as one of the major points of living and being in the area. He said he was told it was an issue of money and being more expensive to go elsewhere.

The commissioner discussed several options for the issue and passed a resolution to draft the requested letter, showing their support for those in opposition. Paris began discussing attempting to set up a meeting for citizens, but the board settled to draft the letter first and move into other options one at a time. In fact, both Paris and Post 2 Commissioner Karleen Ferguson voiced support for the citizens after just a couple of citizens spoke. While the public continued voicing concerns and requesting certain solutions, the board as a whole was already discussing at several points throughout the comments on what steps they could take and what they could do in support.

In addition to this, another person stepped up to speak during the comments section. Travis Crouch, a resident of an area past Boardtown Road. He said he doesn’t live on Boardtown and would, in fact, be one of the people that would benefit greatly from the project. He noted that his home has had 28 outages already in this year alone.

Crouch stated, “I do not want to see those power lines.”

He said that his power is an issue that needs to be addressed, but added that if the only solution required doing what the project is calling for on Boardtown Road, then “I would rather deal with the power outages, seriously.”